Bilal Powell and the Run Defense; A Series of Unfortunate Events

Share All sharing options for: Bilal Powell and the Run Defense; A Series of Unfortunate Events

I have repeatedly stated that I have a lot of faith in the UC run defense. I believed in it before the Louisville game when UC was ranked 12 in the country against the run, and I still believe it now after surrendering 209 yards and a couple of scores to Bilal Powell and the UofL running game. I know many people watched Friday's game with moan's of "here we go again", and "just like last year". It's easy to make that jump, but it is, in my opinion false to do so. Last years problems stopping the run were systematic. Start with the scheme. Brian Kelly switched to a 3-4 without having anything approximating the personnel to play it right. Derek Wolfe was well suited to play the nose tackle spot, Ricardo Matthews evolved into a good run stuffing end by the end of the year. But outside of those guys there were few good fits. The linebackers were far to light to hold up at the point of attack as run defenders and there wasn't the type of dominate rush end OLB hybrid needed in that system work. Walter Stewart played that spot at a nickle or two over 200 pounds. Couple that with a defensive coordinator who was resolute in his refusal to blitz. Anyone. Ever. Thereby negating the principal advantage of the 3-4. The pressure can come from anywhere. But not if you don't bring it, Bob Diaco never did. The end result was a 3-4 alignment that played like 4-3, and it was a disaster.

The moment that put fear of a repeat of last years issues stopping the run was without a doubt the 85 yarder ripped off by Bilal Powell which is as close to a legendary run that I have ever watched live.

This what happens when a great running back gets his eff you face on and a defense makes several small, but correctable, errors that snowball into a big problem. More explanation after the jump. 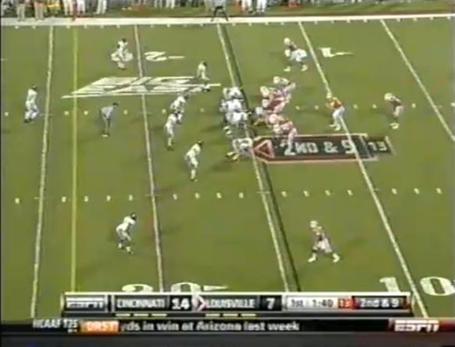 This is the formation at the start of the play. It's a pistol set with two TE's a WR making it trips to the right. On defense UC is in a 4-3 showing a cover three look with Drew Frey acting as the single high safety and Chris Williams rolled up to the strong side giving UC 8 men in the box against the run. So far so good. 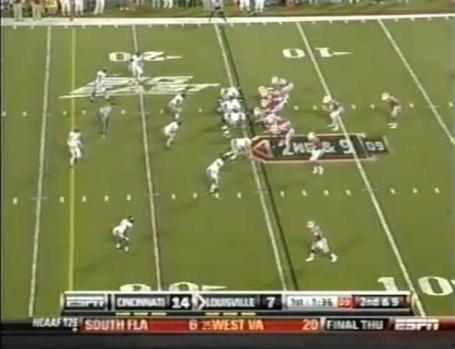 The wide receiver motions from the boundary side to the field side. To compensate the Sam backer, Walt Stewart walks out with the Wide Receiver. This is the first mistake on the play, though I am unsure who the blame goes to. There are several possibility, either Walt did the right thing walking out or he didn't. For the sake of the exercise assume that he did the right thing. In that case Drew Frey needs to walk down into the box. He doesn't the end result is that UC is facing a run formation with just six men in the box and leaving multiple gaps uncovered. 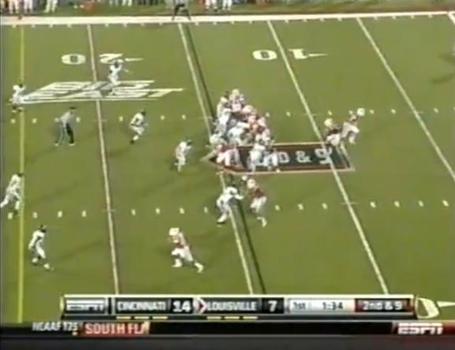 This is just an outside zone play from Louisville, you can tell by the angle of engagement the Cardinal offensive line has with the UC defensive line. The UC D-Line is playing it correctly trying to string out the play to the field side, moving Powell's aim point further and further outside. Drew Frey starts to realize his error and begins to flow into the ally. 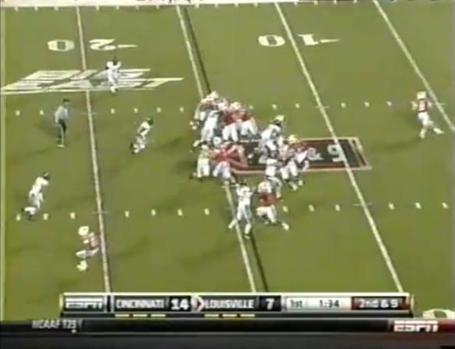 UofL gets a hat on every play side defender. Powell has two holes to hit on either side of his guard who has engaged J.K. Schaffer. If you look closely you see Dan Giordano begin to get snowed under by Byron Stingly. In the back end Reuben Johnson and Drew Frey read run, Frey flows into the ally in earnest now. Chris Williams has back pedaled to his deep safety responsibility out of the picture and Cam Cheatham, not reading run, has backpedaled himself completely out of the play. But all is not yet lost. Maalik Bomar has read the play correctly and is still unblocked. 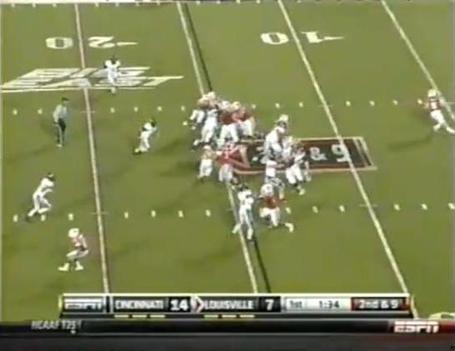 Powell begins to hit the hole. Schaffer is in the process of successfully crossing the face of Wetterer, John Hughes has already crossed the face of Mario Benavides and is trailing the play. This is where the second mistake takes place. Bomar, instead of slowing his flow to clean up the play from the backside, attacks downhill the gap to the right of Wetterer. Defenders are always taught not to try to go back door to make plays because it almost never works and surrenders leverage to the offense. That is precisely what happens here. 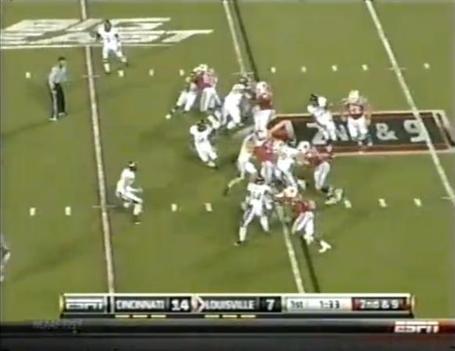 Bomar realizes his mistake and corrects his course, Walt Stewart successfully defeats the stalk block of the slot receiver and rounds into position to make the play. Frey breaks down four yards from the point of attack. At this point the play appears bottled up. There are four defenders in position to make a play, Bomar, Frey, Stewart and Dan Giordano. Against an average running back this play is stopped for a six or seven yard gain. But Powell is not average and the mistakes begin to come fast and furious. 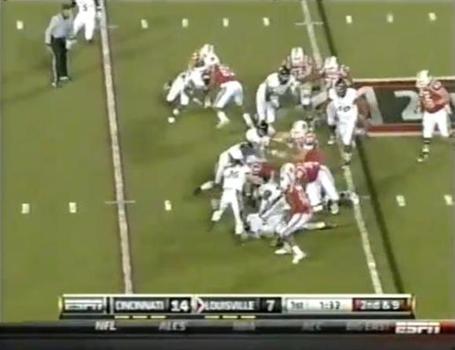 Despite his man being in position to make a tackle Stingly doesn't give up on the play and buries Giordano at the feet of Walt. Frey and Bomar both throw shoulders at Powell, Bomar tries to wrap up Frey does not. Walt dives over Giordano at the legs of Powell. Derek Wolfe, Brandon Mills and Hughes beat their blocks and pursue the play and would make it if Frey and Bomar could hold hold Powell up a little longer. 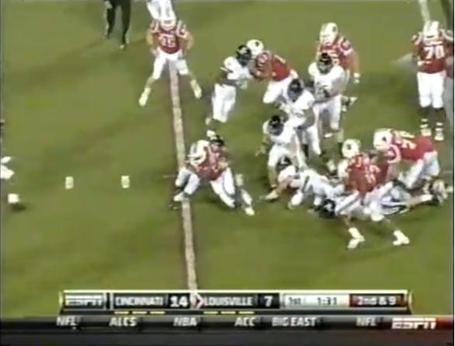 Powell shrugs off the tackles of Frey and Stewart and winds up one on one with Bomar. This situation is why Bomar's brief attempt to attack the right hand gap a few pictures ago is a mistake. Now he is one on one with Powell. But he doesn't have a good tackling angle, with his head in front of the ball carrier, and is just trying to hold Powell up and wait for help, which is entering the picture in the form Chris WIlliams, the white clad leg at the far left of the picture. 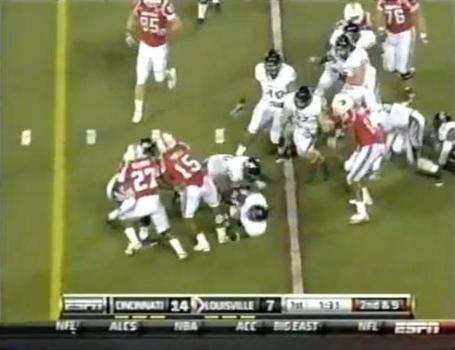 At this point Bomar has been holding Powell for about three seconds and is just about at his end. To help things along he gets absolutely decked by Chris Williams. Cameron Cheatham has found his way back into the play. But still remains, after about 4 seconds, blocked by Doug Beaumont. This is the point in the game where UC misses Wesley Richardson the most. Chris Williams is immensely talented, but Wes is a better, more sound tackler. As such he is infinitely less likely to knockout his own teammate on a play like this. 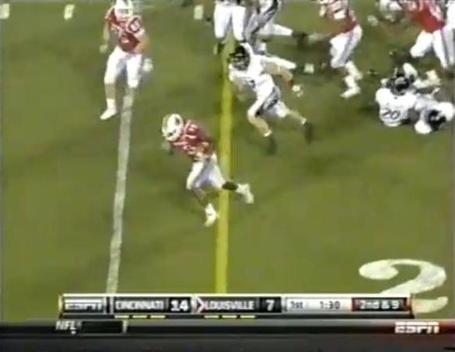 At this point UC has one hope, it's J.K. Schaffer who is taking a good angle and could potentially make the play. Unfortunately... 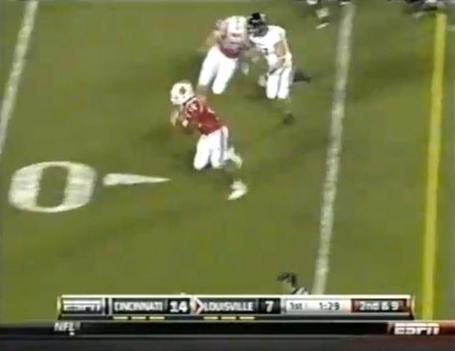 Clean block by Nate Nord. Good job by him to trail the play, that's just smart instinctual play by a Sophomore 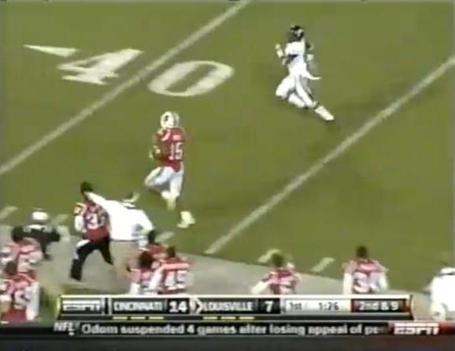 That's Rueben Johnson on the pursuit, next to Richardson he is the best tackler in the secondary. But This is the final mistake on the play. This isn't a proper angle, his aim is much too acute. Whether this is because he is trying to trip Powell up for the tackle or because he misjudged his speed, or perhaps a combo of both. The end result is that Johnson is set up for nothing more solid than a dive at his legs. 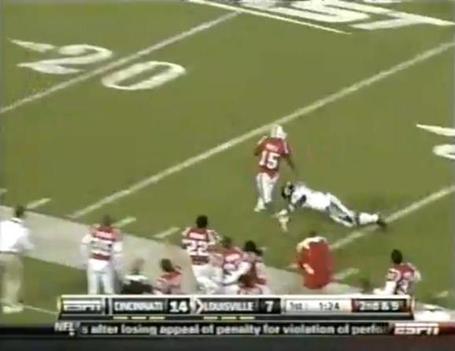 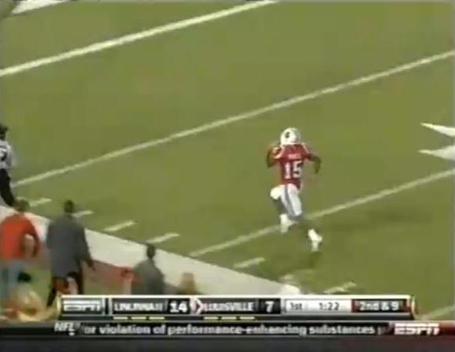 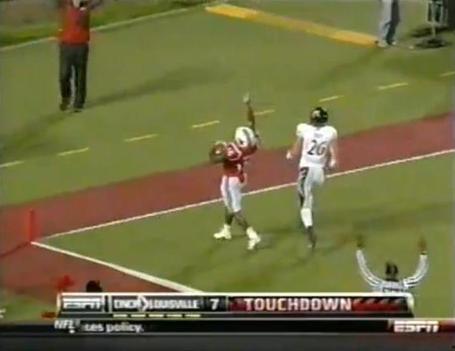 This was just one play, and it was pretty much the only play that went really wrong with the run defense last Friday. Outside of this play UC held Powell to 124 yards on 23 carries, a 5.4 average not great, still the first 100 yard rusher allowed since the Pitt game last year, but not terrible. Because of that I don't really see this as the harbinger of future disasters because all of the mistakes that were made are small and correctable. I still remain confident, if a bit less confident than at the same point last week with this run defense.