Share All sharing options for: The Bearcat Running Game, Now With 20 Per Cent More Jet Sweeps

You might have noticed on Saturday night that the UC offense, which had been moribund in embarrassing losses to West Virginia and Syracuse, returned rather emphatically Saturday night. There was no single reason behind this offensive outburst. Every person associated with the team raved, before the game and after, about the preparation the team had this week and as my old high school coach said you play like you practice. The prep work was obviously good, but what jumped out at me watching the game was that the offense got a whole lot more creative in terms of design and play calling than it had been at any point this season. Finally Bajakian started to utilize the jet sweep series, which was instrumental to the offensive success at Central MIchigan, but had been by and large abandoned this season. The primary purpose of the jet sweep is to stretch the defense horizontally by motioning a WR full speed across the formation and then handing him the ball trying to get to the edge of the defense. The ultimate aim of the series is to use the fast motion of the wide receiver to leverage holes in the defensive front for the inside zone to the running back, which is the counter to the Jet Sweep. Here is a brief video showing most of the Jet Sweep variations.

At my old site I did a post about this subject. I thought that the jet sweep series would play a much larger part of the offense than it has to date. That started to change on Saturday night where I saw more jet sweep action than I had in the entirety of the season to date and it worked. Brilliantly. Isaiah Pead is a such an explosive back and so dynamic in the open field that as an offense they need to maximize his chances to get to the second level. In recent weeks the running game had ground to a halt because the running game was very predictable for a start, and had no clear sense of cohesion wherein you run one play several times to set up another down the line. The net result of those factors was Pead running into the teeth of good defenses who knew where he was heading before the ball was even snapped. UC ran Pead quite a bit in the first quarter using the same old inside/outside zone concepts that has been staples of the offense this year. However in the fourth series of the game the Jet Sweep appeared. D.J. Woods took one for 40 yards and then, two plays later, he took a reverse 9 yards for a TD and the Rutgers defense was effectively behind the 8 ball from that point forward. On the Jet Sweep series UC gained, by my hastily scribbled notes, over 120 yards and one touchdown.

The great thing about the Jet Sweep series is that while the blocking for the play remains identical for the offensive line, it can be run out of any formation, utilizing any player as the Jet, either running back or wide receiver. UC used three different players for the Jet motion, Isaiah Pead, D.J. Woods and Anthony McClung, though only Pead and Woods carried the ball. As the Jet back Pead had 1 carry for 9 yards and a TD, more on that later. Woods carried the ball 3 times for 41 yards as the Jet. UC ran the motion out of almost every formation they used on the night. But by far the most frequent look was out of a 2x2 with a TE or H-back to the play side. More detail below.

Lets start with Isaiah Pead's 9 yard TD run. I apologize for the poor quality of the images, there is only so much to be done with a standard def broadcast and a digital camera. 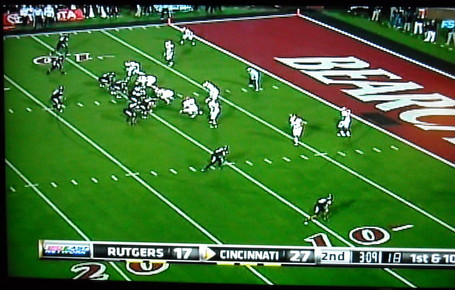 UC goes empty on this play with Pead in the slot to the left and Adrian Robinson lined up in an H-Back look. 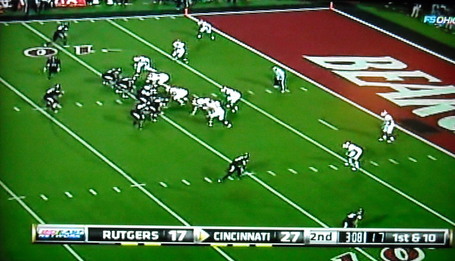 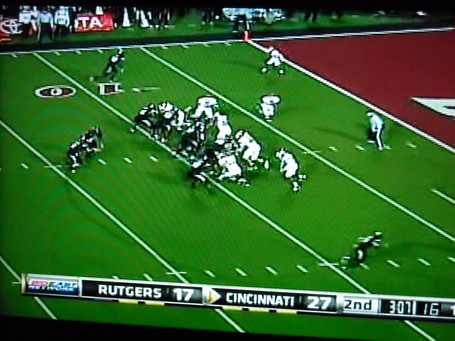 ...and arrives at the mesh point. 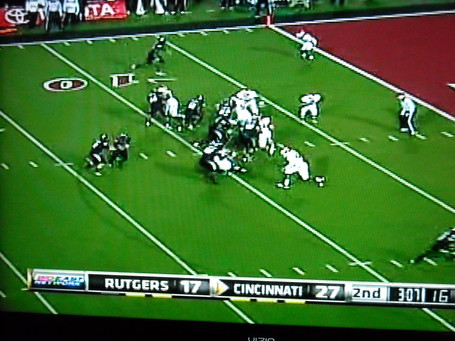 So far Rutgers is defending this as designed employing the scrape exchange with the defensive end and linebacker. However Collaros rides the mesh long enough to cause Steve Beauharnais, the linebacker on the play to step slightly in Collaros's likely hole to the left of Robinson, even though that is the defensive end's responsibility. 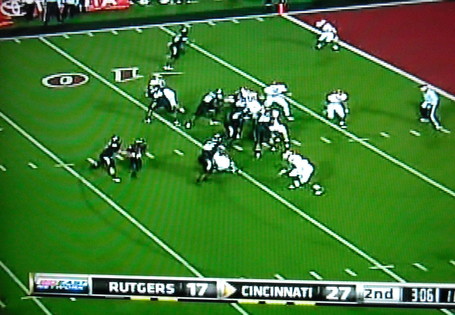 Collaros gives the ball to Pead who heads to the edge. 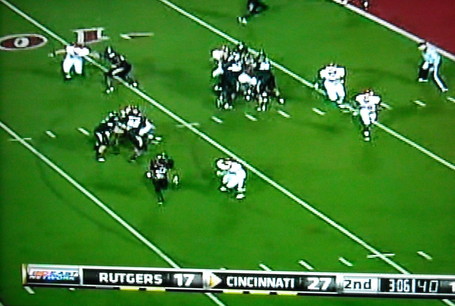 Pead outruns the angle of Beauharnais who's hesitation two frames ago means that he will be in a position to at best dive at the feet of Pead... 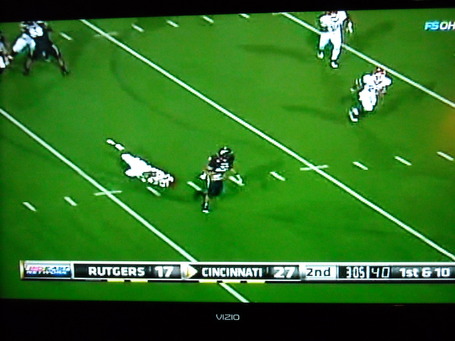 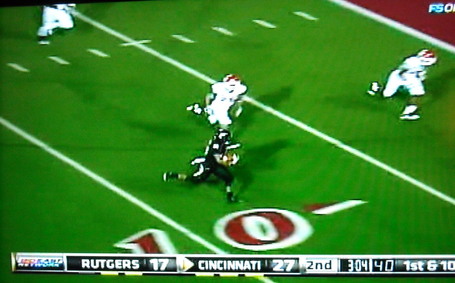 Briefly Joe Lefeged and Khaseem Greene both look to be in good position to make plays. 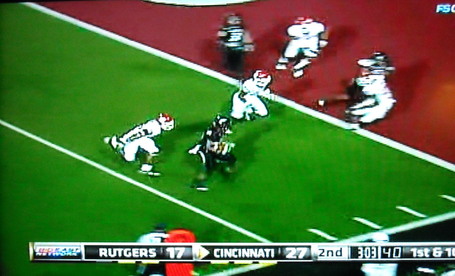 However Pead has too much speed and outruns the angle of Lefeged and anticipates Greene's play to go low to knock Pead out of bounds and... 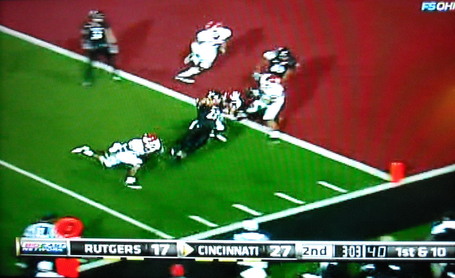 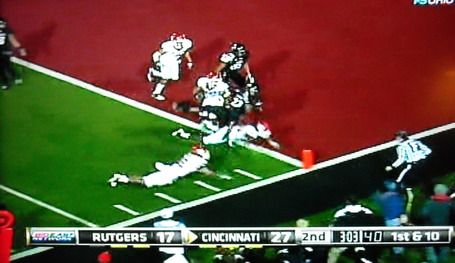 ...Pead goes skyward for the TD.

The Jet Sweep will most likely be a big wrinkle in the UC playbook for the rest of the year and into the next as well. defenses always have to respect that speed motion and that should leverage open gaps in defensive fronts for Isaiah Pead and alternatively for Zach Collaros as well.