The True Story Behind The Bearcat's Arrest

Share All sharing options for: The True Story Behind The Bearcat's Arrest 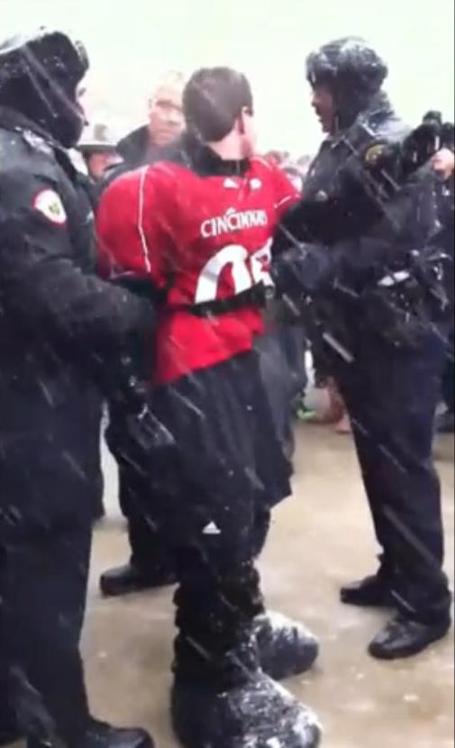 By far the biggest piece of news to come out of UC athletics today actually had nothing to with anything that took place, you know, on the field or court or whatever. It is was much more noteworthy for the news that the UC Bearcat got arrested for throwing snow balls. With that the UC Bearcat joins a very exclusive club, being one of only two mascots to win the Capital One Mascot Challenge and be arrested, the other of course was Sebastian the Ibis, the mascot for the U. 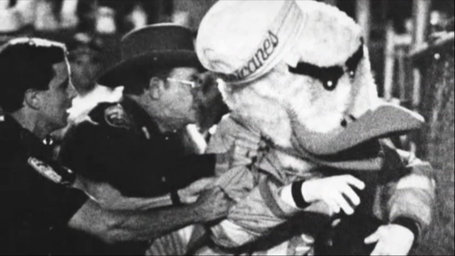 Whats that you say? Sebastian the Ibis has never won the Capital One Mascot Challenge. Even better. The Bearcat will now go down in Mascot history as the only mascot to win the biggest, and only, mascot competition on the planet and be arrested in the same calender year. A fine achievement to be sure, and one that is surely never to be matched in the annals of Mascot History. But whats the real reason for the arrest. What would prompt such a furry and lovable creature to engage in such a despicable act.

(The story picks up fifteen minutes later in an expansive and darkened interrogation room in the basement of University Pavillion. The room was once the site of an underground fight club organized by Nancy Zimpher. Zimpher was undefeated in her two years fighting on Cincinnati's underground fight club scene fighting under the moniker of "Redd Dressing" before a being forced to retire from club competition due to an unfortunate accident sustained snorkeling off the coast of Australia near the Great Barrier Reef when she was eaten by a Great White Shark. The Nancy Zimpher currently serving as Chancellor for the State University of New York is really a cyborg sent from the future)

Police Officer One: So, what exactly prompted you to do this.

Bearcat: Can I get my headgear back

BC: The comically large furry head currently being held in your right hand. 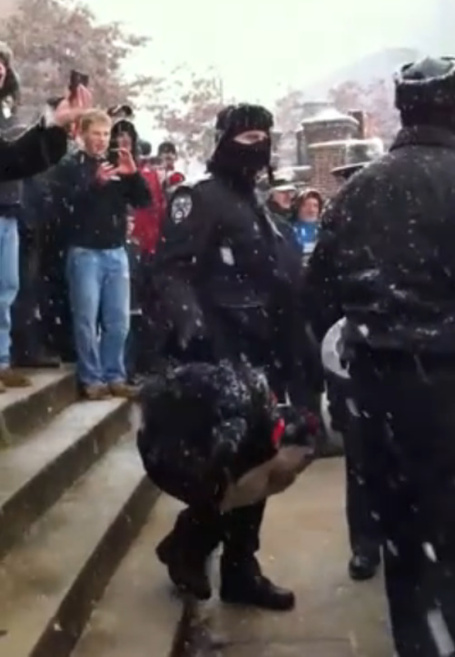 PO1: What happened out there son? Why did you do it

PO2: You know exactly what we are talking about!

(The Bearcat just sits silently and smiles for a while) 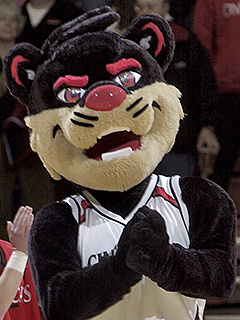 PO1: Jesus Ian, you need to calm down!

PO2: Shut the fuck up Richard! I can't stand this little pricks smirks.

PO1: You know that is just a mask right?

PO2: Of course I know that!

PO2: Why the hell did you throw snowballs into the crowd.

BC: I didn't throw any snowballs at anyone. Honest.

PO2: Show him the tape

(PO1 moves slowly to a darkened corner of the room. The sound of rolling polyurethane wheels fills the room as PO1 returns with a TV and a tape)

PO2: You did it because you are an entitled little punk

BC: This year has been rough man. It was all such a rush. There I was in December, riding the high of an undefeated season and another BCS bowl. The Basketball team was ranked and I was about the win the Mascot Challenge...

BC: And then Kelly left. Florida kicked our ass and the Basketball team faltered down the stretch as ever taking away an NCAA bid. It just all started to go down hill from there.

PO1: What do you mean it went down hill

BC: Well I started to smoke a little pot, you know, to take the edge off. And that was fine at first but then it all started to snowball 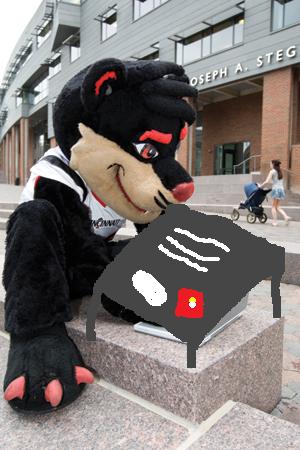 BC: Well I went to rehab and got clean and sober. I was doing really well. You know I started looking out for myself, I realized that I had something to live for. I had a mascot challenge to win again. So i started eating healthy and working out...

BC: When this season rolled around I was in the best shape of my life. 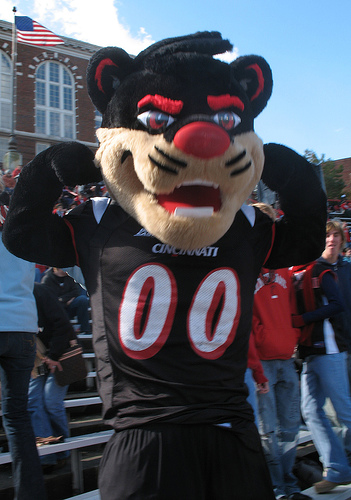 BC: But then it all started to go wrong. The Juggernaut I had known on the gridiron fell apart right before my eyes and week by week my frustration grew until today. I saw those Pitt fans go into the Student Section and I just couldn't help myself. I let all my anger go with those few soft volleys of frozen and packer water.

PO1: That doesn't excuse you behaviour.

PO2: Well, The basketball team is doing good this year.

BC: For now, Cronin will find some way to screw this thing up.

PO1: You're probably right on that...

PO2: Regardless there is always tomorrow. Things will get better. Who's to say things won't go back to the way they were.

BC: I guess you are right.

(The two men and the anthropomorphic Binturong share a tearful embrace. Moments later, after they composed themselves, The Three gather their things and depart Nancy Zimpher's former Fight Club as friends, forever changed by the what transpired in that room)