Trenier Orr commits to the Bearcats

Share All sharing options for: Trenier Orr commits to the Bearcats

UC received a commit from three star athlete Trenier Orr on Sunday night according to Tim Adams in his second job as the UC recruiting guy for the enquirer. Of course Adam's does the UC recruiting stories because Bill Koch is a lazy incompetent hack who hasn't realized that being a good reporter in today's fragmented media landscape involves covering recruiting as well as the games busy.

On Sunday, UC received a commitment from a three-star player, cornerback Trenier Orr of Ocoee, Fla.

Orr is listed as an athlete by rivals and a CB by scout. Trenier was originally down to visit Colorado State this weekend and UC the next but he bumped the CSU visit and came to Clifton instead and committed. Orr is the 21st member of the 2011  class. More info and highlights after the jump. And as always check out the recruiting map to find out where in the hell Ocoee Florida is.

Update: One day after making his initial commitment to UC, Orr asked to be removed from Rivals list of Cincinnati Commits pending his visit to Colorado State.

Fast forward one day and Orr cancels his visit to Fort Collins, reaffirms his commitment to UC and is back on the list of commits. 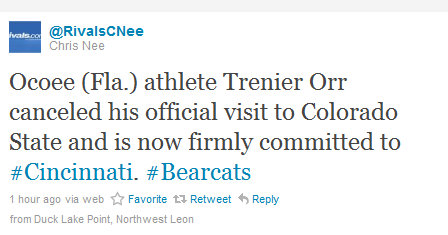 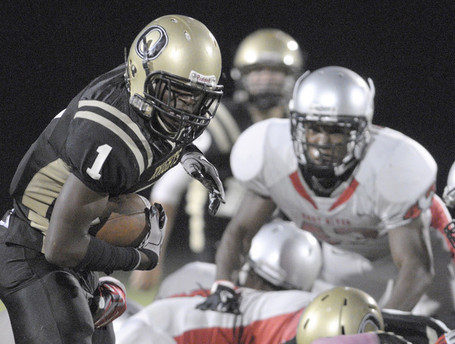