As ever the key word in that statement is win. I have just come to accept that this UC team, and pretty much any Mick Cronin coached team, will never win in a aesthetically pleasing manner. It is just not in their nature, and that is really nothing to be ashamed about. The objective is to win, and this UC team is set up to do just that. They play tough lock down defense, they rebound and they (usually) protect the ball. Those are the three things that Mick Cronin spends hours upon hours banging on about. I am sure that variations of the point were circled at the top of the whiteboard in the visiting locker room at the Carnesseca Arena. The offense is obviously a second class citizen in the Basketball offices of the Lindner Center. And I do have an inherent objection to that mentality because I have an affinity for a certain brand of Basketball, particularly offensive Basketball. The most enjoyable team for me to watch in the last decade was the 2008-09 North Carolina squad. That was pretty much the perfect team as far as I am concerned. UC doesn't share even a single quality with that team. So as you can imagine watching UC play offense can induce fits of hair pulling rage, that is a big subconscious reason why I never allow my hair to be longer than an inch, much more difficult to pull hair of that length. Moving on.

This game was the personification of the Mick Cronin philosophy brought to life, particularly in the second half. The first half was just weird, really weird. UC turned it over more times in the first half than in any game I can easily recall. I made a tweet about Cashmere Wright being terrible with his ball security, but it wasn't just Cash, though he did wind up with eight turnovers, but no one could hold onto the fucking ball. Dion Dixon, Justin Jackson, Sean Kilpatrick and Rashad Bishop all wound up with two turnovers on the night.

The starters tonight were just completely ineffectual, Darnell Wilks played 9 minutes and registered 2 rebounds, 1 block and 3 fouls. Never start him again. Dion Dixon had his worst game of the year, only 13 minutes 0 points, 1 rebound and one assist. The bench flat out saved UC tonight. UC can go 10 deep, but they almost never get contributions from that 10th guy. They did tonight, Biggie McClain got 4 points, 6 rebounds, 1 block and 1 assist in 8 minutes. That has to be his best game as a Bearcat. The other guy who had his best game of his career is Justin Jackson, which makes me happy because it gives me an excuse to call him The Wildebeest and run this picture. 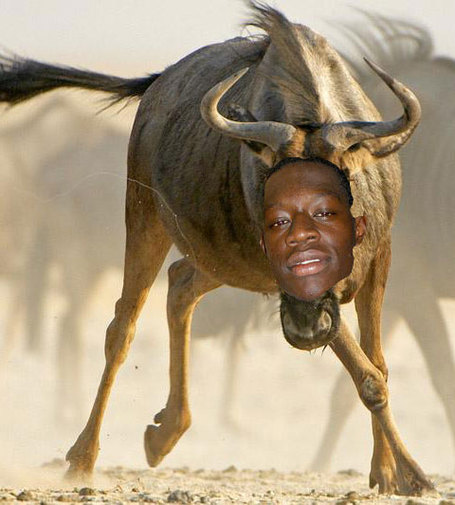 In 29 minutes Jackson piled up 8 points, 6 boards, 2 steals, 1 assist and 1 block. It took career games from Jackson and McClain to keep UC in it during the mid point of the first half. You can't count on that happening again, and something seriously has to be done about the terrible starts. Darnell Wilks is not the answer in place of Ibrahima Thomas. I say start Jackson, he is outplaying all the other options for that second forward spot and he will be needed going forward beyond this year. He does make freshman mistakes, but so does Wilks and recently so does Thomas. When you take a look at the boxscore you have to wonder how the hell UC pulled this out. But a win is a win. 17-3 is nothing to smirk at and at 4-3 in the conference things are looking up with the freshly victorious, if not entirely good Rutgers team coming into Fifth Third Arena before the return of Bob Huggins next Saturday.