Share All sharing options for: Cincinnati Bearcats Football Recruit Round Up: Week 8 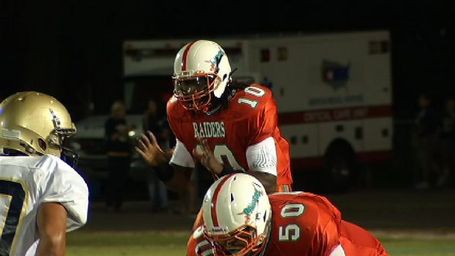 like/follow Down The Drive on Facebook/Twitter and check out the store.

Colerain 24, Lakota West 19 // cincinnati.com
Lakota West really lit up the Cardinals passing game with 250 yards and a pair of late TD passes in a late rally that turned a 24-6 walk into a 24-19 escape. Andre Jones and the Cardinal defense bowed up after giving up a 47 yard pass that set up first and goal at the Card 2. After a 1 yard gain on 1st West fumbled on 2nd and 1 and Colerain recovered ending the threat

St. Xavier 45 LaSalle 21 // cincinnati.com
It was a very quite night for Ryan Leahy and the Lancer offense. The passing game was effective, as expected, but the running game mustered just 62 yards on 2.1 per carry. Ultimately 3 turnovers did the Lancers in.

Madeira's Rupe too much for Indian Hill in second half // cincinnati.com
Kyle Williamson and the Mustangs struggled to run the ball against toradtional conference power Indian Hill for most of the first half. After the break however the Mustangs ground out well of 200 yards rushing. The Mustangs are 7-0 on the year.

Maple Heights 29, Shaker Heights 25 // cleveland.com
A close shave for Jeremy Graves and Co. But in the end the Mustangs move to 6-0 on the year. Graves caught a 8 yard TD on the night. No further stats are available to me.

Five in a row for Troy // Troy Daily News
Another week, another huge rivalry game for the Troy Trojans, this week against Piqua. Marcus Foster had a rushing TD and starred for a defense that gave up a single score on the night.

South Vigo Football vs. Warren Central // MaxPreps
Deionte Buckley went for 188 yards and 4 TD's on the night as the Warriors rolled once again

Franklin Central Football vs. Lawrence Central // MaxPreps
Another easy win for Kevin Brown and the Bears

Grand Blanc football clinches conference title with 28-6 victory over Hartland // MLive.com
Lester Liston had 114 yards of total offense and two TD's on the day. He also keyed a defense that surrendered just 6 points. Grand Blanc moves to 5-2 (4-1) on the season with two weeks to play. Also check out this profile of Liston from mlive.com

Southfield @ Oxford // MLive.com
Not a lot out there on Leviticus Payne and the Southfield Bluejays. All i know is they lost to Oxford and will slide out of the Michigan Division 3 poll

Detroit Southeastern Vs Martin Luther King // Fox 2 Detroit
Dennis Norfleet and the King Crusaders rolled. Easily. The game was mercifully killed shortly after the start of the 2nd quarter with King up 37-0. No word on Norfleets statistics on the day. My guess? Good stats.

The Cincinnati commitment was an extremely disruptive player for the Central defense. He does a good job of attacking off the edge, filling the gap against the run, or dropping back and playing in space. Long, lean athlete who moves well.

Grady 26, Washington 12 | Prep Zone: High School Sports
John Law and the Grady Grey Knights (I still love that nickname) got a stern test from Washington High School. I will let AJC take it from here.

Meanwhile, the Grey Knights were getting little out of their offense and needed a spark to put up some points. They got it with three straight plays in the second quarter. It started at the end of another time-consuming Bulldogs drive, as Aaron Cooper juggled and then grabbed a Ronnie Humphries pass behind the line of scrimmage and scampered 34 yards for the tying touchdown. On the ensuing kickoff, the Bulldogs got confused on a short kick and never fielded it, leaving the door open for the Grey Knights to fall on it at the Washington 32-yard line. And on the first play from scrimmage, quarterback Kivon Taylor threw the ball into the end zone to a double-covered Deshawn Benton. The ball bounced off both defenders’ hands, and Benton grabbed it for the touchdown. In three plays, the game had gone from a 6-point Washington lead to a 7-point Grady advantage.

Grady moved to 6-0 and is ranked 6th in the statewide AAA poll.

Highlands 79 Pendleton County 0 // cincinnati.com
Drake Bruns and the Bluebirds put 79 on the board (70+ points for the second time in 2011) and recorded a shutout for the 3rd time in 7 games. Moving on...