Share All sharing options for: Film Study: The Joker Package

There are a lot of statistics on offer that demonstrate the improvement of the Cincinnati Bearcats defense in 2011. Total defense has fallen from 369 yards to 348, yards per play from 5.3 to 5.1, rushing D from 134 to 70, pass efficiency from 146 to 137 and on and on. But to me the single biggest difference lies in the third down defense. Long time readers will remember last years issues on third down. Last year the defense converted just 42 per cent of third downs, through 5 games the 2011 conversion rate is 34. A big part of the improvement is a vastly improved defense against third and long*. in 2010 UC converted a staggeringly poor 28 per cent, through 5 games this year that number is 17 per cent. There are caveats to that number, namely that the sample size is still quite small, but UC is forcing roughly equivalent 3rd and long opportunities per game (roughly 7.25) and converting them at a higher rate.

*Note: The definition of third and long varies depending largely upon who you ask. For the purposes of this post 3rd and long is 3rd and 7 or more, basically because that I how I chart it

This is obviously a complicated subject with a myriad of variables that are difficult to account for. That being said I would like to introduce you to a specific strategic wrinkle that has paid big dividends for UC, particularly on third and long. I call it the Joker package, though I am quite sure that Butch Jones and Co. call it something entirely different. This package isn't a third and long specific package. Almost every team has something similar in the playbook, but it has only made appearances on obvious passing downs because UC has not faced a spread team yet.

The obvious goal of any defense is to sow seeds of confusion and chaos in the offense, particularly on the offensive line. UC is a predominately zone team and as such doesn't blitz at all in the conventional send an extra guy and play man sense. UC is zone blitzing team, using the fire zone to great effect. At first blush it is rather chaotic/exotic/risky but in reality the fire zone is pretty safe. The beauty of this for defensive coordinators is that the offense has literally no idea where the pressure is coming from. Playing on the unknown can be a huge advantage for the defense, and the Joker Package does little more play on an exploit that fear of the unknown. Settle in, its going to get real nerdy up in here. You have been forewarned, proceed with caution.

OK the player to look for in this is Walter Stewart. He moves all over the defense and lines up basically randomly with no regard to what the offense does in terms of personnel or formation. The three down linemen align basically the same way every time. This is what the Joker Package will look like on more or less every snap. 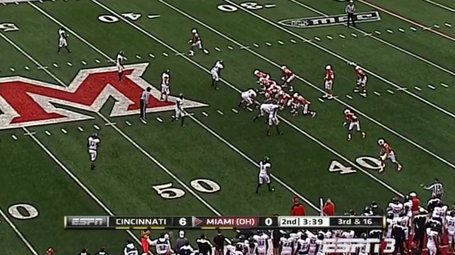 This is an extension of the Nickle Package, but it isn't the nickle package if that makes any sense. So you have a front six, 4 linemen 2 linebackers and 5 DB's. Walt will stay in a two point pre snap. 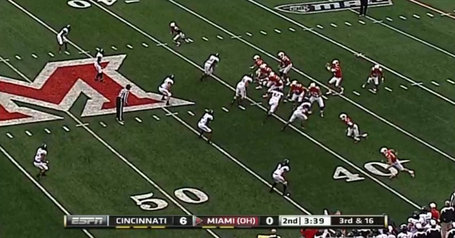 Miami has anticipated a blitz and has kept the TE in so Miami has 6 to block 4. 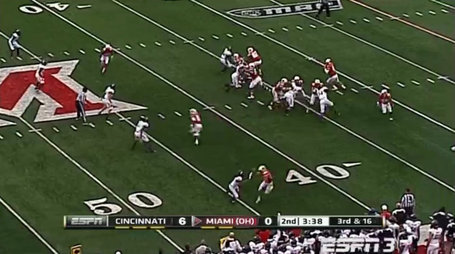 Miami has a numerical advantage in protection and they double team Monte Taylor and Brandon Mills. UC has good coverage on the three wideouts. 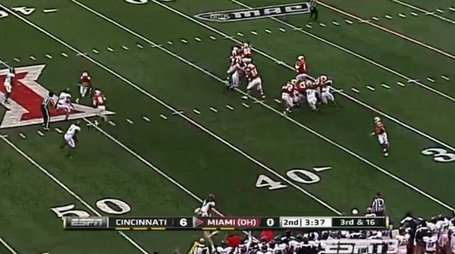 UC has this covered perfectly. Dominique Battle passed Nick Harwell onto the safety and is moving to take away the running back in the flats and the crossing routes are dead. its been two seconds since the snap the ball has to come out. 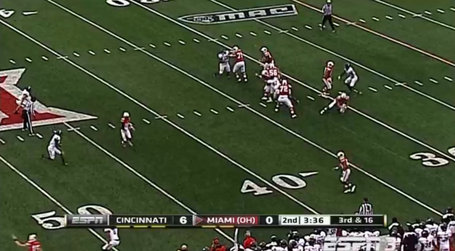 3 seconds after the snap Monte Taylor beats his double team and brings Dysert down.

This is an obvious passing down for N.C. State as demonstrated by their 3x1 alignment. Also I appologize for the fluctuating quality of these screen caps, its the nature of the ESPN3 beast. 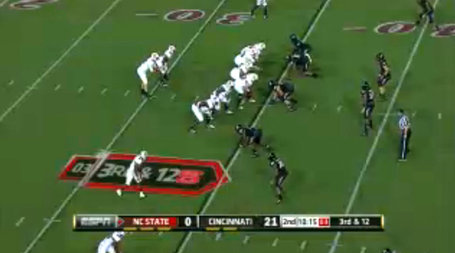 This time Walt is lined up on the strong side of the formation, but he is covering George Bryant. To the State Offense this looks like a blitz pre snap. But it isn't, not exactly anyway. 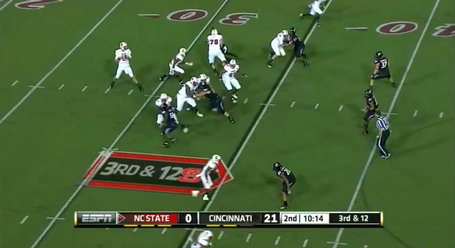 This looks like a blitz pre snap but it is just a three man rush from Monte Taylor, Derek Wolfe and Brandon Mills. Walt isn't engaging in a pass rush, he is instead jamming George Bryant at the LOS delaying his release and throwing the timing off. State has 5 blockers on the OL and they also slide protect to the right, though this picture doesn't show it. 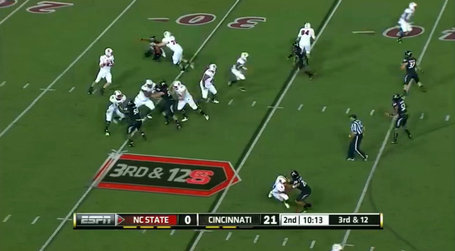 This is where the nature of N.C. State protection scheme becomes apparent as they commit 4 of the 5 lineman to the side of Brandon Mills and Derek Wolfe leaving Monte Taylor in a one v. one against the LT. The key thing here is the running back Curtis Washington who has a check release. Meaning his job is to check for any rushers coming free (usually, but not always a blitzing linebacker) and then release into a check down route. But he has a dilemma because he doesn't quite know what to do with Walt, but he needs to make a decision. 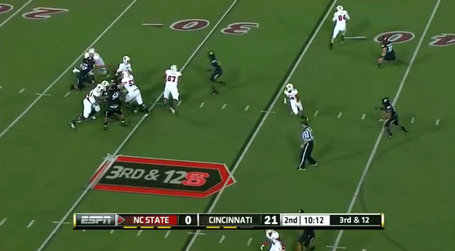 His decision is to release to the flats. This is the wrong decision for two reasons, one that he couldn't know and one he should have known. At the top of the screen Monte Taylor beats the tackle and pushes Mike Glennon to step into the pocket. This Washington couldn't have known, but he should have known that if he didn't pick up Walt that Wayne Crawford (#67) couldn't do it either. Three seconds have elapsed since the snap. 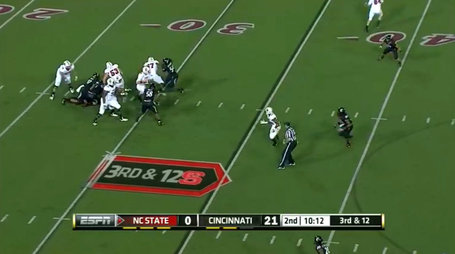 Derek Wolfe by this point has beaten his double team by making a big pile which Monte Taylor quickly joins. Brandon Mills rubs his guy on said pile, loses him and loops around to close in on Mike Glennon. Walt meanwhile easily shucks the block of Crawford who was moving to fast to settle in with a good block. This play is basically dead now. 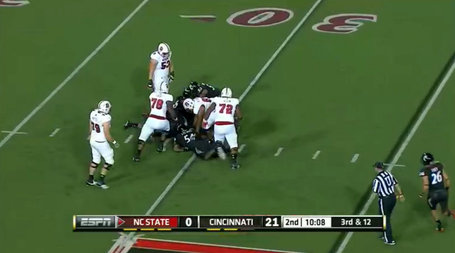 And everyone meets at the quarterback. Take a look at this play from the endzone angle and pay attention to two things, the indecision of the running back Washington and the amount of ground Crawford has to cover to just get a hand on Walt. 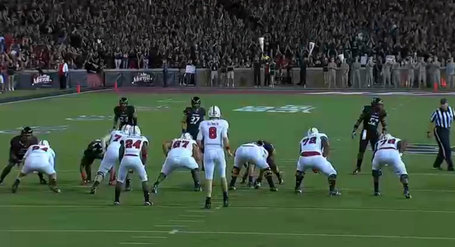 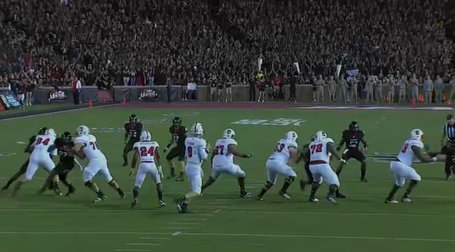 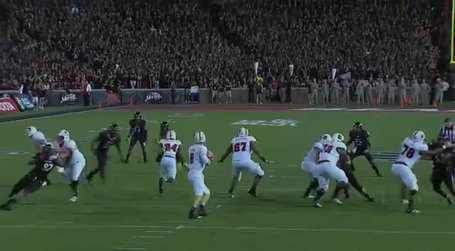 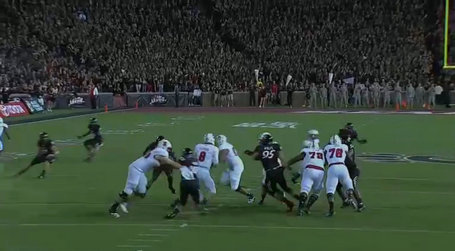 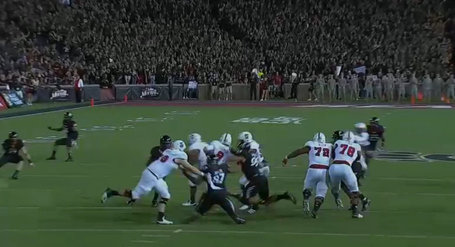 Here is another example of the package, this time with a designed stunt. 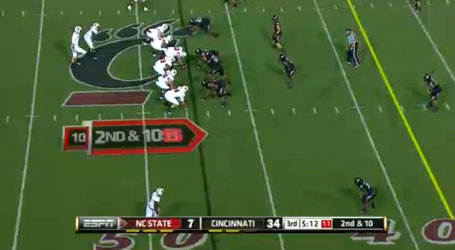 Walt has lined up over the guard to the strong side with John Hughes lined up as an end with Jordan Stepp at nose and Rob Trigg as the other end. The movement of Walt to this weird position would again have the OLine thinking blitz again, but this should be familiar to you by now. 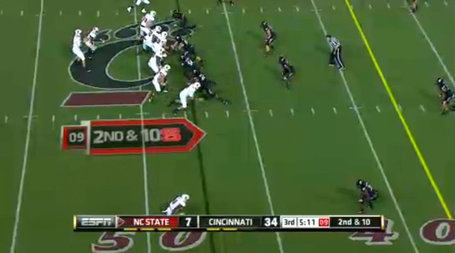 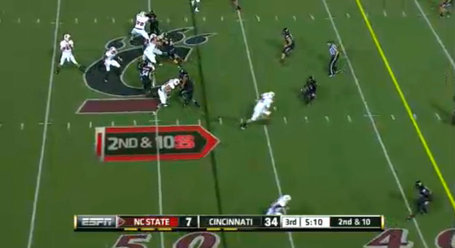 Walt and John Hughes are running a simple twist stunt with Walt going first and pushing vertically with Hughes looping in behind him. State is keeping 6 guys in protection and should be able to pick this up by simple passing Walt onto the tackle and leaving the guard for Hughes. But Walt attacks the guard so hard and pushes vertical so fast that is out and the tackle does not have the leverage to prevent the loop. 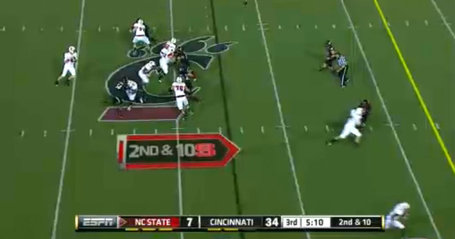 Walt gets pushed deep but beats the guard, Hughes beats the tackle and is bearing down on the 200 pound running back who is now supposed to take on all 6'4" 300 pounds of John Hughes. This protection scheme is officially dead roughly 1.25 seconds into the play. 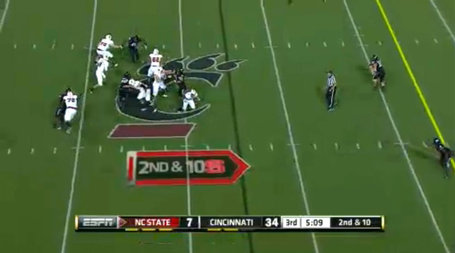 The running back basically whiffs on Hughes and Glennon knows the time is up with Hughes, Trigg and Walt collapsing the pocket in a hurry. 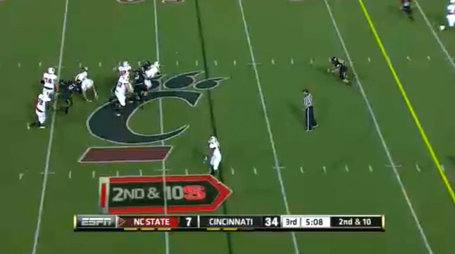 Jordan Stepp and Hughes meet at the QB.

Last one I swear 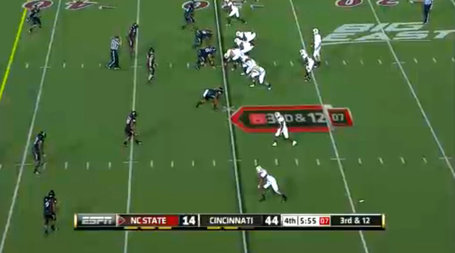 Walt is back outside near the slot again 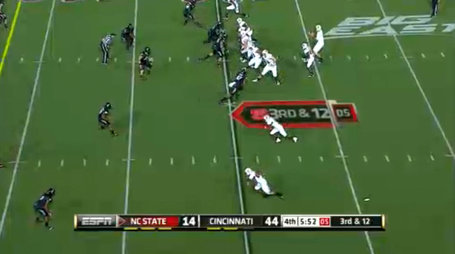 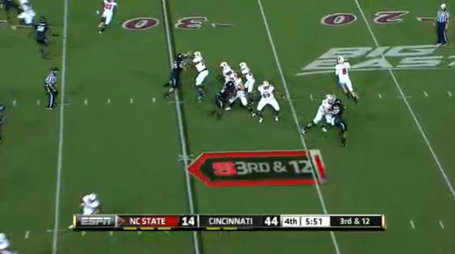 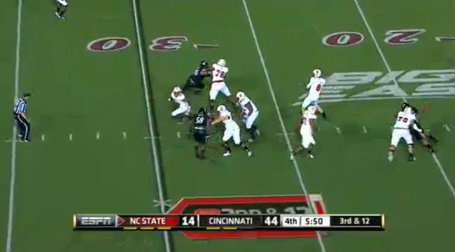 The protection is doing its job so the back releases. 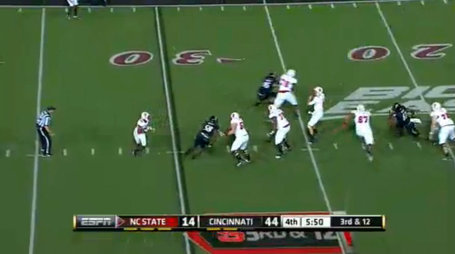 Two seconds after the snap and the ball has to come out. Nothing is available down the field and Monte Taylor has rounded the edge and is crashing back down on Glennon so he checks down to his running back who is well short of the sticks but has some space. 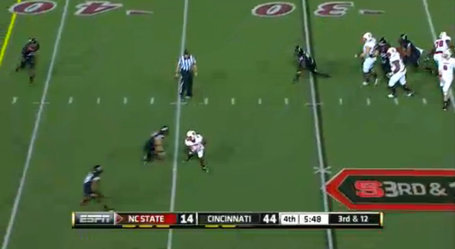 Check that. Had some space.

Walter Stewart has been a guy that has perplexed UC fans this year. He has a ton of potential and athletic ability galore, but his production this year hasn't been great just 14 tackles, 3 TFL and a couple of QB hurries. While it is clear that he still has a learning curve for the position, his influence in games has been undeniably positive this year. Primarily because he is the guy who can make a package like this work.  The offense has to account for him on every play because he can do anything on any play. No one else on the roster could make this package work because no one else has Walts unique combination of athletic skills. He isn't a natural in coverage, last year proved that, but he is good enough to be effective at times and he is still a pretty damn talented pass rusher. In the Joker package Walt doesn't finish off a ton of plays, but he always makes things happen, and that's the point.