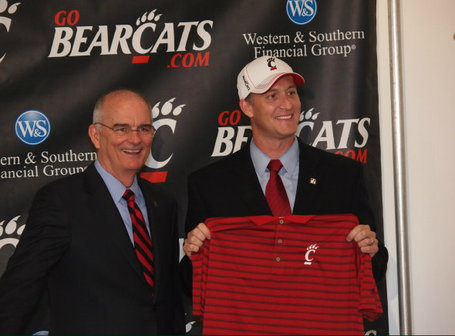 I am not going to spend much time with an intro here. I thought about live blogging this, but the gobearcats.com feed really sucked so I held off a minute. If you want to watch it in its entirety the link to the press conference is here. It's 32 minutes long but nothing happens until 13minutes in.

* Views the appointment of Babcock as a launching point for a new era of UC sports.

* Jumped straight to Babcocks extensive fund raising credentials, which was of course the biggest knock for Mike Thomas

* This is certainly fuel to the fire to those that believe that Mike Thomas was told by Williams to find a job soon because he wasn't keeping this one.

* Has "absolute" confidence in Whit Babcock

* Opens with a joke about knowing what it feels like to be drafted in the first round. Strong move Whit, strong move

* President Williams was a major draw for Babcock taking the position

* Another joke about his children "Drew, Eli and Brett not being named after NFL Quarterbacks." 90 seconds in and I like him already

* Three priorities for the UC Athletic department. A "commitment to comprehensive excellence," a "centering focus on the student athlete," and "We will engage the community...Campus, City, State and Beyond"

* "The logo never comes off"

* Very gracious to Mike Alden (Mizzou AD) for preparing him for the challenge of the UC job.

As I said it took all of 90 seconds for me to like Whit Babcock. About 6 minutes for me to really hate Mike Thomas. Babcock was always the best man for the job and I am thrilled that President Williams was able to bring him into the fold.