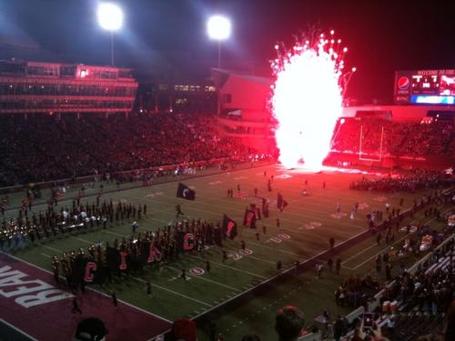 I am late on the draw on this one. But, being a verbose and opinionated sort, I still want to lay down my position. I was against the idea of moving games downtown the second that it was announced, but I understood the rational. If I am allowed to quote myself.

I would still prefer expanding Nippert to its spatial ceiling of around 45,000 to moving a couple of games to Paul Brown each fall. But the Oklahoma game was a huge success by any metric, it was the highest attended UC Football game since the 2002 Ohio State game, UC cleared its largest single event profit in the same time period. The atmosphere was fantastic, the fans loved it, the players loved it, the boosters loved it and perhaps most importantly the recruits loved it.

Looking back, with both PBS games this fall in the books I was basically ready to declare the PBS experiment kind of meh. Then this little bomb dropped this week.

The relevant passage once more.

UC said Tuesday it will sacrifice as much as $1.04 million in sponsorship dollars for its two home games at Paul Brown Stadium this year, games that presented a conflict between UC sponsors and Bengals sponsors.

That's right, UC the athletic department that has been swimming in debt for a decade basically took a million dollars off it's own plate for no really good reason. UC almost certainly cleared the 1.04 million in ticket sales with 90,000 or so sold. But the entire two game arrangement basically broke even.

The question is who gets the blame for this? Is it Greg Williams? Is it Mike Thomas? How about Butch Jones? Or is it the ever present whipping boy Mike Brown? Truth is basically everyone gets some blame in this. Well probably not Butch to the extent of the others.

For the record Jones didn't exactly sound enthusiastic about the prospect of playing another game downtown last week.

Twice within the first few minutes of Butch Jones’ stint on the Big East coaches call today he brought it up.

"The thing that’s kind of lost as we’ve gone on is that we haven’t played a home game at Nippert Stadium since Sept. 22 against NC State, Jones said.

He made the same point again a few minutes later, again with no prompting.

"We really haven’t played a home game since the NC State game," he said.

It's all conjecture at this point, but it seems reasonable to assume that Jones wasn't all in with the idea. As much as it sounds like piling the problems on the guy who isn't even here anymore this is another feather in the cap of Mike Thomas. For a start this sounds like exactly the kind of thing that MAC mentality Thomas would do, give up the inherent advantage of Nippert which has become arguably the toughest place to play in the Big East for a few extra bucks.

There has been speculation that UC just found out about this issue within a few weeks. That strikes me as unlikely. I haven't been able to get someone to confirm this, but my suspicion is that Thomas left this situation as something of a parting gift. Not that no one else in the Deparment knew it was a possibility, but the anticipated potential loss from UC's sponsors would be less than it turned out to be.

This is just another reason that I couldnt be happier about Mike Thomas being on the job at Illinois. He can go screw up their Athletic Department.