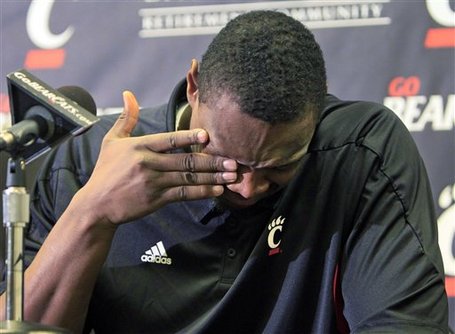 Follow Down The Drive onFacebook/twitter and check out the store.

Word broke yesterday that the University of Cincinnati has reached an agreement on the suspensions of those UC players who were involved in the melee at the conclusion of Xaviers 76-53 win over the Bearcats on Saturday afternoon.

The punishments are as follows; 6 games for Yancy Gates, Octavius Ellis and Cheikh Mbodj for their roles in the altercation and one game for Ge'Lawn Guyn. THe NCAA mandates a one game suspension for anyone involved in an on court altercation. That NCAA penalty is included in the totals. All four Bearcats were brought before the media today. Their collective statements are on offer after the jump

"My parents didn’t raise me like that," Gates said. "A lot of people have been calling me a thug and a gangster."

"The actions that I displayed are not what I’m about," Gates said. "It’s not what UC is about, not what my family is about. It’s been a hard couple of days but those were my actions and I have to deal with what’s going on now. It could have been over for me."

"I really regret this whole thing happened," Mbodj said. "I feel really embarrassed now. I want to say sorry to the Cincinnati community, to the school, to the coach. This is not the way to represent the school. I really want to apologize for my actions. I’m sorry."

"I would like to take this time to apologize to the fans and to the coaching staff," Ellis said. "I know my actions were inappropriate."

"I’d like to take full responsibility for what I did," Guyn said. "I’d just like to say I’m sorry."