Share All sharing options for: Cincinnati Bearcats Threatening To Join The Oversigning Craze

Butch Jones is staring down the barrel of his own self made problem right now. With the latest commitment from Daytona Beach QB Trenton Norvell last weekend the Bearcats 2012 class now stands at 29 commits, and Jones isn't done either. UC is actively pursuing a couple of guys yet to close out this class. Sheldon Dawson of Memphis, Eric Kinsey of Miami and Karl Joeseph of Orlando. If Butch Jones lands all three players UC's class will become 32 strong. Like most people I assumed that the Bearcats simply have the room to add that many guys to the program. As it turns out that might not be the case after all.

For those readers with a knowledge base in recruiting you can probably skip to the jump. If however you don't know a lot about the recruiting process this is going to cover the basics. There is no NCAA imposed limit on the number of players that a school can sign to a National Letter of Intent (LOI for short). Traditionally schools sign a maximum of 25 because a program can only enroll 25 prospects in a given year. But there are ways around that regulation, more on those later. The golden rule for football programs is 85, the scholarship limit for a season. The definition of oversigning is to sign prospects to LOI's in excess of 85 in a four year period. For a more thorough breakdown of the rules, and some examples checkout oversigning.com. 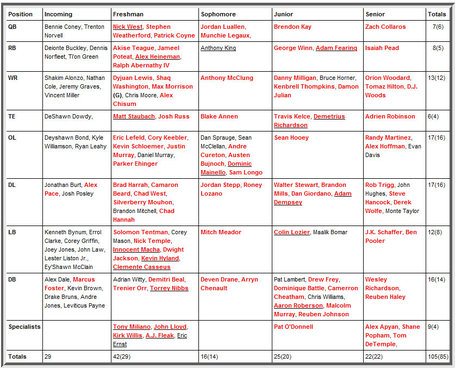 This is the current eligibility chart for the Bearcats program. You can see it, and the annotations, here. UC is in danger of running afoul of the 85/25 rule. 29 commits not only exceeds the 25 man limit for enrolling a class. Additionally the 29 man signing class is 7 larger than the outgoing Senior class of 22, which puts UC over the 85 man limit. These are two different problems, with two different solutions. Lets start with the 25 rule, because its the easiest to deal with and the one where UC isn't actually running a risk, yet.

The key thing to remember is that it is technically legal to sign more than 25 prospects to LOI's. The limit only applies to the number of prospects that a school can enroll at the start of the fall semester/quarter. Anyone who enrolls early, ie December does not count against the 25 man limit and instead can be backdated to previous classes, the conditions for back counting are thus.

The Bearcats have six prospects from the 2012 class who will be graduating from high school in December with the option to enroll early. Bennie Coney, Trenton Norvell, Deionte Buckley, Josh Posley, Jonathan Burt and Kevin Brown. Remember that first part of the rule, there has to be room for the early enrollees to be back counted against the previous class.

This is UC's class last year. The Bearcats had 24 commitments, two enrolled early (Shaq Washington and Malcolm Murray), 21 signed letters of intent and Greg Blair committed, but was never eligible. Of the 21 who signed LOI's only 18 enrolled at UC after December, Carroll Phillips, Rod Coleman and Demetrius Alston never enrolled at UC and obviously don't count against the 25 man limit. In total UC enrolled 18 new prospects this year, which means that UC can back count all of the early enrollees and still com in under 25.

The problem isn't with the 25 part of the rule, its going to be with getting to 85. If everything holds to form between now and signing day (a big, big if) Butch Jones and co are going to have to find 7 extra scholarships somewhere in the roster. Attrition in and of itself is a natural thing. Players leave programs frequently, for any number of reasons. Some transfer to get on the field, some quit because their body breaks down and some guys just quit. But having 7 scholarships open up of natural causes isn't exactly common.

Still, at the moment this isn't a real pressing concern for the staff. There is a lot of time between now and signing day on the first of February. I fully expect a couple players to jump ship or to not sign their LOI's for whatever reasons between now and then. But if Jones picks up any more commitments between now and then things are bound to get awkward in Clifton.