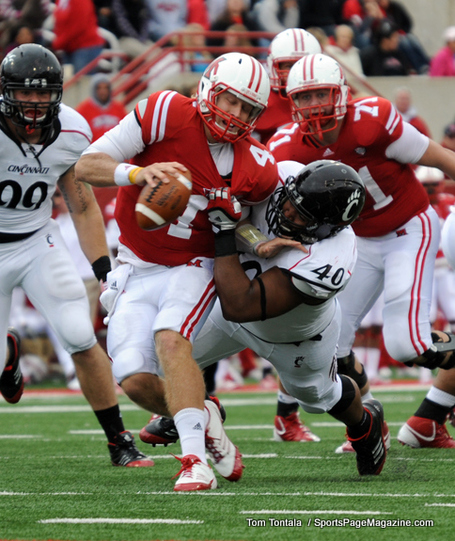 For every Terrill Byrd there must be an Adam Hoppell. John Hughes has been the Hoppel to the Byrd of Derek Wolfe for the last two seasons. The big man from Columbus might not fool anyone with his running back number, but he is plenty athletic and along with Wolfe has given opposing offensive lines hell. Hughes has started each of the last 22 of the last 23 games on the Bearcats front. He does't produce as many of the big game changing plays as his linemate does, but his effect on defenses has been spectacular to watch. Hughes is a big reason why J.K Schaffer and co make so many tackles. With Wolfe and Hughes offenses have to pick and choose who they need to double team. Early this year the double teams were coming to Hughes and Wolfe put up the stats. In recent weeks Hughes has seen more one on one opportunities and has capitalized with 5 tackles for loss and 3 sacks in the Bearcats last five games. I think that Hughes and Wolfe form arguably the best DT combination in program history.

Highlights if you would