Fifth Third Arena A Problem and an Opportunity For Cincinnati Bearcats

Share All sharing options for: Fifth Third Arena A Problem and an Opportunity For Cincinnati Bearcats 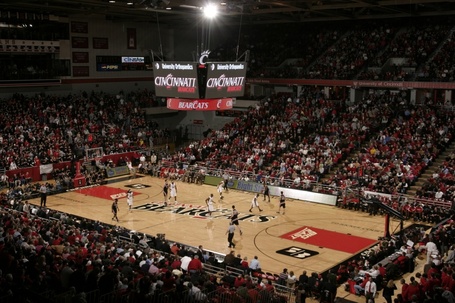 When Whit Babcock came to the University of Cincinnati he quickly discovered the two things that have been on Bearcat Nations collective mind for a least a decade. One is Nippert Stadium venerable, charming, hostile and antiquated. It needs work that much everyone agrees on, how to do it is cause for considerable debate. If you care for my take on the Nip you can find it here. The other problem is the same one, just a different venue.

Fifth Third Arena has served the Bearcats well for over two decades. But it is nearing the end of it's usable life and something will have to be done about it, and soon. Fifth Third is an arena designed and conceived at the heart of the multi purpose era, AKA the 80's. But two decades on the building has one purpose, to stage Basketball games, and it doesn't exactly knock it out of the park.

To my mind the biggest problem with Fifth Third is the dead space in the corners. All of which is a tribute to the dysfunctional multi purpose design. 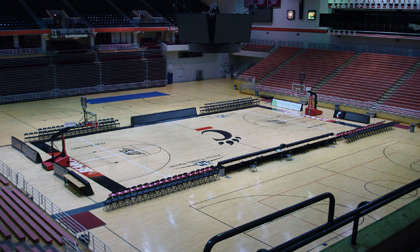 Babcock has acknowledged that there is a problem with Fifth Third Arena recently. He has some ideas about it which is an encouraging step forward relative to Mike Thomas's preferred approach to infrastructure issues. But I have doubts about the feasibility of the prevailing notion.

UC has commissioned several studies to see what can be done to improve the building. Babcock had an architect friend of his check out the building on an informal basis. The prevailing idea is to gut the building and turn the court in the opposite direction, building a seating arena in the round.

I have one major issue with this idea. Firstly I have no idea what is included in the gutting of the place, though I am assuming it will include tearing down the mezzanine's on either side of the court, Included in that would be the main concourses which provide secondary support to the stands above. I think that gutting the building down to an empty shell is the first thing that should be done. But I think the idea of orientating the court to run East to West rather than North to South would be a massive mistake because of the way the building is built.

The problem is that to maximize seating capacity within the existing shell of the building the court can only run North/South because there is just not enough space to build out along what are now the baselines. More than that changing the orientation of the floor would severely limit the amount of seating along the sidelines which is always the most valuable real estate within an arena. Instead there would be far more room for seats along either baseline which are generally lower in quality which obviously decreases their value.

To my mind there are really two options. One is to gut the building to its shell and then rebuild a new seating bowl with two tiers, new luxury seating and obviously new concourses. A complete bowl on the bottom and new mezzanine sections along the East and West sidelines that would look roughly like this, though obviously on a much smaller scale. Make no mistake this is the priciest option of the two. For reference the Oracle Arena in Oakland and Key Arena in Seattle underwent similar operations in the mid 90's, and they weren't cheap. In Oakland the cost was 121 million dollars for Seattle the price tag was 75 million dollars. Adjusted for inflation the price tags come to 169 million dollars for the Oakland and 102 for Seattle. UC's building is smaller than either of those and if the goal is to keep the capacity roughly the same, rather than increasing capacity like the two other examples so it won't be nearly as expensive.

70 seems nearer to the mark from where I am sitting.

The other option, and this is the one I think winds up happening, is to rip out the current roll away bleacher systems and to build in their place a new permanent seating bowl in the round. There is certainly ample space to get that done within the confines of the building. Keep in mind that this is basically what UCLA is doing with their Pauley Pavilion renovation. The costs for that would come in much cheaper, but still at least 30 million, most likely closer to 40.

Fifth Third Arena is nearing the end of its useable life, and Whit Babcock is right that something has to be done about it, and relatively quickly. Though it should be said that it makes no sense to commit to doing Fifth Third Arena or Nippert Stadium without addressing the other. Both are out of date and antiquated, neither has been touched in 20 years. Both need work, and the price tag isn't going to be cheap. So can someone just go ahead and sell their soul to Proctor and Gamble already?