The mixed past between the Cincinnati Bearcats and transfers.

Share All sharing options for: The mixed past between the Cincinnati Bearcats and transfers.

While the Bearcat Football team has been enjoying unparalleled level of success in recent years. Even though last years record was far below expectations the general trend for Bearcats Football is still pointing up, more or less. The run under Brian Kelly introduced something relatively new for UC, and that was an infusion of transfers from other division 1 schools. Transfers in an of themselves were not a new development, UC had been a magnet for them since the Minter era. Remember this guy? 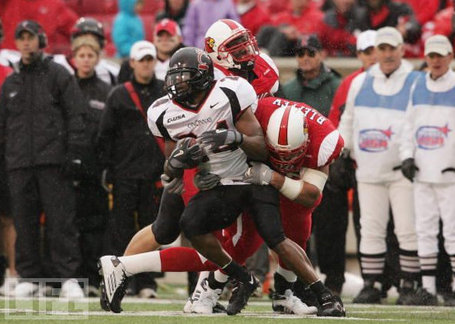 Until a certain number 9 joined the program Richard Hall was the most prominent transfer into the program in at least a decade, probably more. Hall had a great three year run with the Bearcats after transferring from Ohio State. Until Isaiah Pead ran for 1,029 yards this past year Hall's 1,012 yard 2004 season was the best of the decade.

Every school gets transfers, generally the further down the College Football pecking order you get the more receptive you have to become to the idea of bringing in transfers to your program. For most of the last decade UC has been pretty firmly planted in the middle of the ladder.

What has been interesting to watch for me is not just how interested Brian Kelly was in bringing transfers aboard, but how aggressive he was. His time at Cincinnati coincided with a pretty large up tick in the number of transfers he brought into the program. Some of those guys worked out, others simply did not. It got to the point near the end of his tenure that seemingly every high profile transfer was linked to UC in some way or another. Not all of them found their way to Clifton, but a lot of them did and they have collectively left their mark on the UC program. You can view that either as a negative development or a positive one. The reason I bring this up now is the transfer of Sam Longo from Ohio State to Cincinnati has piqued my interest. I know that UC has brought in a quite a few guys in the last five or so years and while I remember the success stories, I know there have been guys who just simply didn't work out. So I have done some digging and this is what I have come up with.

I am going to limit the scope to the last 5 years, that means the 2006 through 2010 season. I think that is a good place to start because it will encompass each of the last three coaching regimes and give an impression on how active they were attracting transfers. Though they are technically transfers I am not including JUCO players in this mini study, primarily because the primary hang up with Division 1 transfers is the mandatory year on the bench. JUCO players are not subject to the same rule and come into the program ready to play. This is a big reason why a lot of the name program exclude themselves from the transfer market but will go after high level JUCO players. Immediacy counts when it comes to building a program, or shoring up depth at a position, so if a school has to choose between two guys, one who is a little bit more skilled than his competitor, but will have to sit a year as a transfer and another who might be a notch or two down the skill totem but can play immediately player two usually gets the nod.

OK, there is the entire history of UC's transfers since 2006. As you would expect there have been some hits, and some misses. I included White and Luallen in this impromptu study because both actually joined the team in the fall of last year, even though neither of them will be eligible until 2011. In totality I think that UC has done quite well in the transfer market.

The misses were really big misses, Charles Harbin was a member of the program for all of a season, never made it onto the field in any game and left the program shortly after wards. The bottom line was that he just didn't have division 1 talent, as you would expect from someone transferring in after playing for the Battling Bishops of Ohio Wesleyan in lovely Deleware, Ohio. Cornett played Basketball at Prairie View A&M and then transferred to UC to play Football, kind of a reverse Lance Jeter. He had a mixed impact at UC, he was a back up linebacker, he played well enough but was never more than a spot player.

The two biggest cases of transfers not working out at Cincinnati are Demetrius Jones and Dorian Davis. Jones left Notre Dame under, um, interesting circumstances and joined UC in the fall of 2007, after playing a game for Notre Dame but before the start of the Cincinnati academic year and was good to go in 2008. A lot of people expected him to compete for the QB job after the departure of another transfer, Ben Mauk. Didn't happen, UC started 3 quarterbacks in 2008, Dustin Grutza, Tony Pike, and Chazz Anderson, and played two more, Zach Collaros, and Jones played snaps, or in the case of Jones 1 snap, in the wild cat against Louisville. Visual Proof. 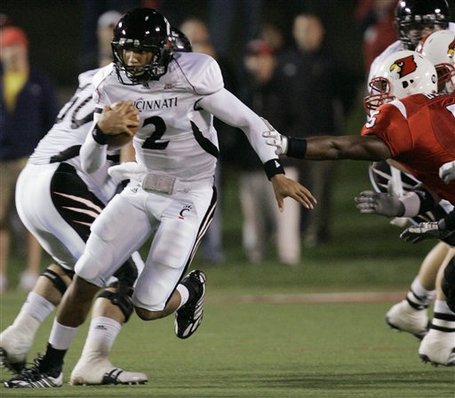 That was the only play that Jones played as a Quarterback at UC. He was promptly in the dog house, moved to linebacker in the spring of 2009. He played a big role in the season opener against Rutgers, started the next four games and went back into Kelly's dog house from whence he never escaped. Jones didn't get with Butch Jones's agenda and was kicked off, or voluntarily left, depending on your preferences. He is currently at Central State where he is a Receiver/Tight End who racked up all of 200 total yards last year.

The other big swing and miss is Dorian Davis who was dismissed from Tennessee for the ubiquitous violation of team rules. He landed at UC where he played in 13 games, getting more and more run as the season wore on becoming less and less effective. He was dismissed in the summer of 2010, not too long after Jones.

The transfers that really worked out for Cincinnati in the past few years really worked out. Ben Mauk was an unbridled success. His one year stat line 386 attempts, 235 completions, 3,121 yards, 8.1 yards per attempt, 31 TD's against 9 INT's all of which are among the top 5 single season marks for UC quarterbacks.

Alex Daniels and Brandon Underwood were both defensive stalwarts, Underwood in 2008 and Daniels in 2009. Underwood moved to safety after the first few games and wound up being a first team All Big East pick in 2008. Daniels was a transfer from Minnesota and played big roles in the 2008 and 2009 defenses, as a starter in 2009 he was a force along side Ricardo Mathews and Curtis Young. Both of them have been on NFL rosters, Underwood is on the active roster with the Green Bay Packers.

So the question before you Bearcat Nation is how do you feel about the relatively high number of Division 1 transfers in the program? It is clear that UC is a very prominent name and in the last 12 months UC has been linked to a lot of transfers Darrell Scott, Bradnon Carswell, Isaac Johnson, Patrick White, Jordan Luallen, and Kenbrell Thompkins. Those are the biggest names linked with UC in the past month. The last three are part of the program and will probably make an impact this year. I have White and Thompkins penciled in as starters before spring on defense and offense respectfully. Now with spring practices upon us and all the new recruits starting to report to campuses in a couple of months the transfer market is really going to heat up. Butch Jones has already gone out and gotten Sam Longo in the fold. The question remains, do you want UC to to continue being proactive in the transfer market given the past history with transfers? Leave your thoughts and opinions on the subject below.