Mick Cronin Considering His Options, Mike Thomas Trying His Best To Get Fired

Share All sharing options for: Mick Cronin Considering His Options, Mike Thomas Trying His Best To Get Fired 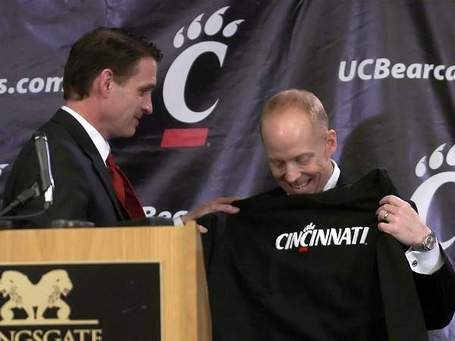 It is not news that Mick Cronin has been working on an extension to stay with the Bearcats well into the future. His current contract has him on the books until 2014. He and his agent have been reported to have talks going back as far as the first week of March. That is not a surprise, any agent worth his salt would try immediately leverage the season Cronin just had, mind you the most wins since the 2001 season. Cronin's guy has done just that and they are pushing for a raise, extension and a more robust commitment to Basketball. None of this strikes me as being particularly unreasonable requests. Considering where he started from, what he has had to work with from a facilities stand point he is certainly entitled to make these requests, and it shouldn't be that big a deal for the Athletic Department to move on them. However in a wholly unsurprising development considering the glacial pace at which Mike Thomas works it isn't quite fast enough for the coach. A coach pleading for facility upgrades is nothing new for Mike Thomas, Brian Kelly quite frankly wouldn't shut up about it. The Jefferson Avenue complex was done almost entirely by Brian Kelly, he was the one who pushed for it and he was much more involved in the fund raising process than most coaches would ever be for a project like that, even though he never saw it to completion.

Now Mick is asking for similar infrastructure improvements, and Thomas is predictably dragging major ass on the process. So much so that Mick Cronin is now willing to hear out suitors. Make no bones about it, he has suitors, Oklahoma and NC State chief among them. I don't think that Cronin wants to leave UC for a second, this city is a part of him. He did the traditional West Side thing, he went a GCL School, (LaSalle in his case), he graduated from UC, he worked for Huggins and Petino before striking out on his own and he jumped at the chance to come back home and coach his Alma Mater when it was at a very low ebb. Cronin isn't asking for much, after doing the work he has done on a shoestring budget his demands are not exorbitant by any stretch. He wants to continue to grow the program and get it back where it was at the turn of the Millennium. Everyone wants that, or everyone but Mike Thomas wants that. It is hard to take a different stand on that. Brian Kelly said it best in the lovely Bearcats Rising the Athletic Department under Mike Thomas has a clear and demonstrated MAC mentality. Kelly had to cow Thomas into making any sort of progressive decision, and he wasn't exactly shy about hiding his disdain for Thomas. Losing Mick right now would set the Basketball program back another five years. That simply can't happen.

Any way you slice it though Mike Thomas needs to be fired. That MAC mentality is on him IMO, everything I have heard about him from people who have known and have worked with him come back roughly the same. He is a perfectly nice guy, but he can't handle the pressure of the position and doesn't have the foresight or creative vision that made Bob Goin so good at his job. The biggest initiative of Thomas's time in Clifton was his Catapult program. It's five years and what tangible steps has Thomas made to see it through? You are drawing a blank because he really hasn't done much more than say "I want to win a Big East title in every sport within five years." It's great to be ambitious, but your five years are up and if that is the standard you want to be measured against expect harsh judgment. As the UConn Blog noted during the whole Robert Burton ballyhoo a couple of months back there really aren't that many groups to worry about if you are an AD.

There are exactly four constituent groups that an athletic director needs to appease to keep his job. They are, in increasing order of importance: the fans, the coaches, the press and the donors.

Thomas is 1-3. The fans are fed up with his shit, at least the ones to watch closely are. The working relationships Thomas has had with the Football and Basketball coaches in his time have ranged from poor (Mark Dantonio, whose entire staff thought Thomas was belligerently incompetent FYI) to damn near unworkable (Brian Kelly) with Mick Cronin somewhere in the middle. The big money donors are still keeping their money out of the department, having worked for a couple of months as a University Fundraiser I can promise you this is true. So 1-3 is not a good mark in absolute terms. Bottom line Mike Thomas needs to get his ass in gear and sign Cronin to the extension already. If he doesn't Cronin will be gone and Thomas will be remembered as the guy who hired two guys who did remarkable rebuilding jobs, but watched each of them walk out the door within 16 months of each other. If that isn't a fireable offense for an Athletic Director at major athletic department I don't fully comprehend what is.