The Difference Between Butch Jones and Brian Kelly: Part 1

The difference between Butch Jones and Brian Kelly comes down to a simple notion. To gain yards you must be willing to take on risks, be it of turnovers or simply incompletion's. Kelly believed that to his core, Butch Jones and Mike Bajakian did not.

Share All sharing options for: The Difference Between Butch Jones and Brian Kelly: Part 1

It is not a revolutionary notion to state definitively that there is a difference between Brian Kelly and Butch Jones. One guy came in and set the world alight, the other guy, not so much. The standard narrative heading into last season went something like this.

Brian Kelly was a masterful coach who managed to pull all the right strings in his three years in the Queen City. Butch Jones is following Kelly at Cincinnati, just as he did at Central Michigan. He runs the same offense and has the same philosophy and should be able to pick up right where Kelly left off with the deep stock of talent left from the Kelly era.

We all know that the blurb above turned out to be, almost entirely, bull shit. The roster wasn't stocked with talent. In fact it was basically the football roster equivalent of the Gilded Age. Up front it is all very bright, and very shiny. Beneath the veneer lie real, tangible and inescapable problems. But this post is not about the structural issues that Butch Jones was faced with that last, those are well documented elsewhere.

What I want to address herein is the notion that Jones and Kelly's offenses were for all intents and purposes the same. In truth they are similar offenses, but there are key differences between them that make the assertion wrong. This is going to be the first in a three part series

I can see the route by which people go about calling the offenses the same. If you go and look at a game from 2009 and one from 2010 at lot of the same things pop up. In almost all cases there will be at least three WR's on the field, and occasional running back or tight end. Pre snap 2009 and 2010 look exactly the same. But what goes on after the snap is very, very different.

There is much more to an offense than formations. Formations and personnel groupings can give an idea about what an offense is trying to do, but it gives up nothing in terms of schematic specifics. Consider for a moment the offenses of Mike Leech and Rich Rodriguez. Both are spread offenses. They run out many of the same personnel groupings and use very similar formations. The basic idea of getting your most explosive players isolated in advantageous positions is, for all intents and purposes, the same. But the execution couldn't be more different between the two. Leach is the guru of the Air Raid offense, as the name implies, he likes to throw it, a lot. Rich Rod on the other hand spread to run. Even though Leach's Texas Tech teams and Rich Rod's WVU teams are both nominally "Spread Offenses" the difference between them was night and day.

The difference between the offense of Brian Kelly and Butch Jones is not as large as the gap between Leach and Rich Rod, it is still sizable, though much more nuanced. The main reason that I am addressing this point now is that there seems to be a notion gaining steam among UC fans that I think is patently bull shit. The basic gist is that last year Jones couldn't do anything with Kelly's players running BK's offense and so he obviously won't be able to do shit this year now that a lot of Kelly's guys have moved on. 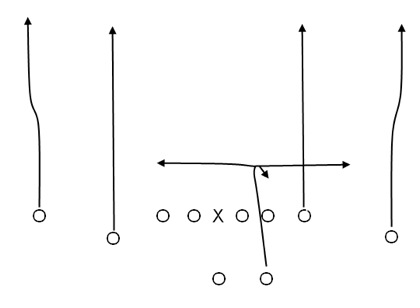 This was the base play for Brian Kelly. It was the Sun around which the rest of the offense revolved. Everything went back to this play. This worked because the initial play itself is good against almost any defense aligned in almost any coverage. Even defenses that would try to pattern read this play would struggle because there is no one stem that gives the end product away like you see in the mesh or levels concepts. It is the Toyota Camry of offensive plays, simple, efficient, and utterly reliable.

The real advantage to the scheme is that it allows for nearly endless variability. There is always a basic and underlying fabric for the offense, but on top of that layer are nearly endless possibilities for variability and improvisation. 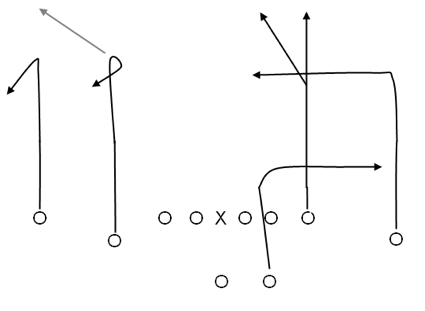 The other point that needs to be made is that while the four verts concept was at the heart of all the Brian Kelly did offensively he did run the other spread staples, frequently. From mesh to stick or the WR middle screen to levels, most famously here, Kelly ticked all the spread offense boxes. Still sooner or later BK always headed back to the vertical well.

In a more conventional offense the quarterbacks drop is timed with the route of the wide receivers. It is all very buttoned down, very structured and conservative. The quarterback reads the defense and makes the decision to throw to a spot where he knows the receiver will be. That is how most offenses are run.

Kelly's offense had very little of that sort of buttoned down, staid quality. It was much more free form, much more collaborative. The receiver and the quarterback would read the defense in tandem, together finding their way to the open area in a defense. There is probably no better example of that then Marcus Barnett's TD in the 2nd quarter of the 2008 Pitt game.

This play combines two passing game concepts, the smash concept to the two receiver side and levels on the three receiver side. 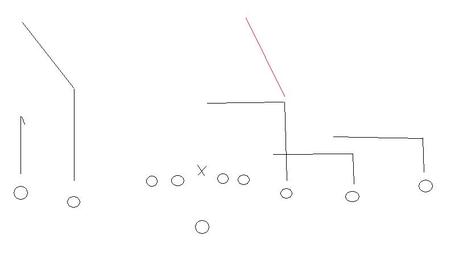 The primary read with this normally would be to the two receiver side with the smash concept. However, since Pitt was in cover 0 Bones, or indeed any of the receivers, simply had to beat the jam and he would have nothing but grass in front of him. The play wasn't designed as it was run but the end result was still good. This just serves to illustrate the more free form nature of Brian Kelly's offense. Yes there was a structure underlying Kelly's offense, but it was very flexible. More a guide than anything set in stone.

I titled this as the Kelly Ideology but in retrospect that might not be just right. BK was never an offensive ideologue. That is not to say he didn't have an ideal for his scheme, or for the players who played therein, he definitely did and I will hit on that point with a latter post. But he was more than willing to be flexible about how he approached a gameplan. Nothing brought this point home more than Zach Collaros filled in for the injured Tony Pike in 2009.

The Tony Pike injury was a big deal, obviously losing a Heisman contender always sucks. But it was bigger than just losing Pikes talent. Pike is the perfect fit for the ideal Kelly offense. He is big, he has a huge arm and what's more he is able to hang on in the pocket long enough to make the offense work at peak efficiency. Kelly went from Pike to Zach Collaros, who in many respects is the anti-Tony Pike. He is barely 6 feet tall, he has an average arm and he has a tendency to escape from the pocket at the first available opportunity. In other words he isn't the ideal candidate to run the 5 wide empty gun sets.

This is where the genius of Brian Kelly is manifest. BK had this young, inexperienced QB who wasn't the ideal for what he wanted to do with the offense. So Kelly managed to craft an interim offense for the month or so that Zach had the job that was tailored to Collaros strengths, without exposing any of his weaknesses. What Kelly did was very simple and very smart. In the month that Collaros started Kelly used more two TE sets then he did in the rest of his three years. The reason that this is so smart is that it plays on the oppositions expectations. In most cases if a staff loses their starter and has to go to the back up for a long period of time they will rely on the ground game to get through that, and UC did run more and with better results in that four game stretch then the rest of the year. So when UC would line up with these two TE with such an abnormal frequency, relative to the rest of the year, defenses would play the run with the expectation that the passing game would be much more conservative. Of course the passing game was just as aggressive as ever. To top things off the offense had the threat of the play action pass, which had been nonexistent for most of the 2009 season. But once the defense started respecting the run the skies opened up and Football reigned down on the people. Some examples. 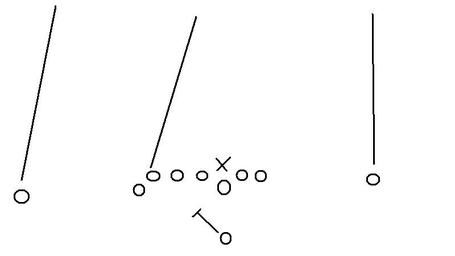 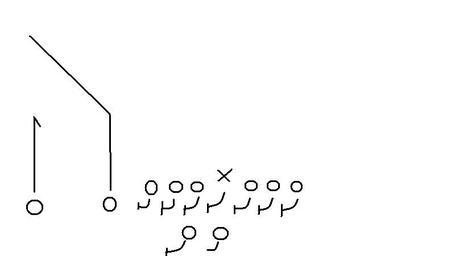 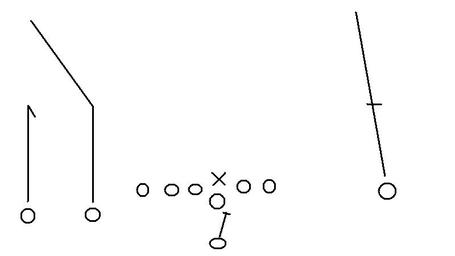 So the change in personal groupings for the month long run with Zach Collaros was nothing more than window dressing. It looked like the Bearcats were going to grind it out on the ground a little bit more then they had for the bulk of the season. UC did run it more, but the offense was still one that was going to stretch defenses vertically with the passing game. The main difference was that Collaros used much, much more play action to open up the vertical seams then Tony Pike did, but that was about it.

At it's heart the offense that Brian Kelly dsigned and implemented was very much like the man himself. High risk, high reward. The Kelly system was very simple, the notion of having two players on the same page trying to exploit a defense in the same way is about the most routine description of a Football play imaginable. Ensuring that that will happen as intended would yield very high rewards. At the same time the margin for error is much greater, not just because of the inherent risk involved when a system depends on any two people seeing something happening in exactly the same way, which almost never happens. It was also more risky because Kelly taught his QB's to look at the deep route first before coming back to the intermediate ones, which is the opposite of how most OC's teach their quarterbacks to go through their progressions.