The Difference Between Brian Kelly and Butch Jones: A Word On A Photo

A brief clarification, and conclusion, to this four part 5,000 word opus to my unemployment and overabundance of time and enthusiasm for the minutia of football.

Share All sharing options for: The Difference Between Brian Kelly and Butch Jones: A Word On A Photo 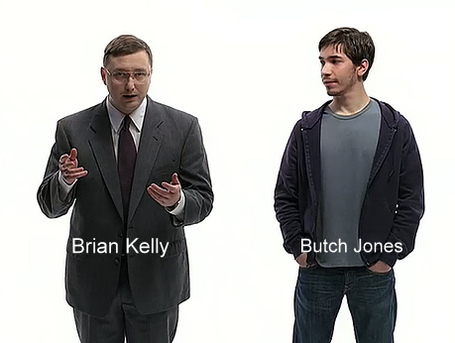 This photograph has caused a pretty solid flow of emails into my inbox in recent days and I have grown tired of repeating the same paragraph every few hours. I assumed that everyone would get the point of the picture in the context of the 5,000 or so words that preceded it. Turns out I was wrong, and that's probably on me.

The difference between Brian Kelly and Butch Jones lies not in the final product, but in the way they go about creating that final offensive product. The same sentence is also an easy explanation for the differences between PC and mac. I labeled Kelly as the PC because all PC's are plug and play in their design and construction. If something goes wrong you can just go to Best Buy and buy a replacement motherboard, DVD drive, or whatever. It is very simple to fix a PC. MAC's on the other hand don't have universal parts, they are designed and built to function with a very specific set of components. If one of those components goes bust it is harder to rectify the problem. You can't really fix a mac with a 20 minute trip to Best Buy. You can drop it off at the desk for someone else to fix, but you yourself probably can't fix it.

I think that everyone can agree that MAC makes a superior product. But these posts aren't about the end results, more the process. If I wanted to compared and contrast the differences between Kelly and Jones based on results I would have wrote a single sentence, "Brian Kelly is better than Butch Jones" the end. In the process of creating their offenses and finding people to fit within Brian Kelly is PC because he can take anyone and make them fit into his offense with little to no disruption to the production of the group. Jones is a MAC because he needs very specific pieces to make his offense work, and without them it sputters because there isn't an easy way to integrate replacements into the whole. Thats the difference and the point that I was trying to make with the picture.