Getting To Know NC State

Share All sharing options for: Getting To Know NC State

The NC State game is of vital importance to the Football team this coming year. UC has two match ups with BCS conference teams this year, one on the road at Neyland Stadium against Tennessee, the other at home against N.C. State. We all remember the disaster that this game was for the Bearcats last year. Personally I think I took it really, really well.

The story of NC State starts with the Morrill Land-Grant Act which was signed into law by Abraham Lincoln with the express purpose of creating a series colleges that weren't dedicated solely to the purpose of a "classical" education. For a University to have Land Grant status it had to have an eye on the practical application of science and technology. The quote.

without excluding other scientific and classical studies and including military tactic, to teach such branches of learning as are related to agriculture and the mechanic arts, in such manner as the legislatures of the States may respectively prescribe, in order to promote the liberal and practical education of the industrial classes in the several pursuits and professions in life 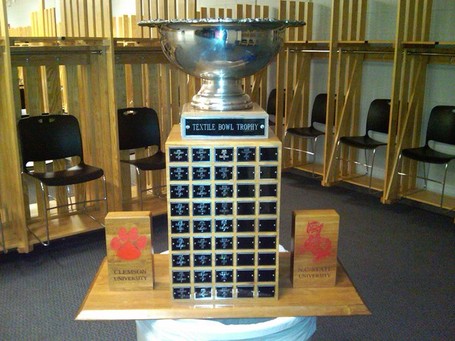 NC State and Clemson have met on the Gridiron 79 times. Both schools were charter members of the ACC and were two of the schools that showed the most interest in the sport in the Basketball mad conference, though obviously Clemson is a "Football School" and NC State is clearly a "Basketball School." During the early years of the rivalry the play was kind of sporadic, they would play five years in a row and then take a four year sabbatical. However the two have played every year since 1956. Clemson has dominated winning 51 of the 79 contests, including each of the last 7.

Lots and lots to choose from here ranging from Zach Galifinakis to former chairman of the Joint Chiefs of Staff Hugh Shelton with Nobel Prize winner and current head of the Intergovernmental Panel on Climate Change, Rajendra K. Pachauri somewhere in between. But I am going to take the easy way out and say Phillip Rivers, if only to have an excuse to post this picture. 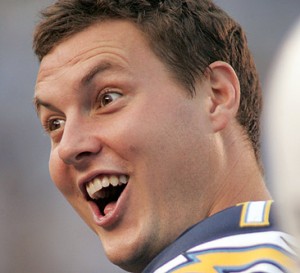 It has been a long while since NC State has legitimately competed for an ACC crown. Since going to divisions the Wolfpack have never made it the ACC title game even once. 4 of the 6 Atlantic Division teams have made the game, including rivals Clemson and Wake Forest. The last NC State Football championship came in 1979. Since then every ACC school save the newly minted Boston College Eagles and the Hurricanes of Miami have won at least a title. Yes, even Duke has won a Football crown in the interim.

This year's team was looking strong with a multi year starter at QB, a solid backfield led by Mustafa Greene, and a talented line to go with a potentially dominating back 7 on defense. Then the Russell Wilson melodrama began. Wilson is off the squad is firmly in the hands of Mike Glennon, once hyped recruit turned 3 year under study. There is little question about Glennon's physical ability, but there are lingering doubts about his ability to make everything come off properly.

Intrigue. There will be lots of it floating around this game because these are two squads that have very high ceilings in terms of what they can accomplish, but both have massive question marks in the way.