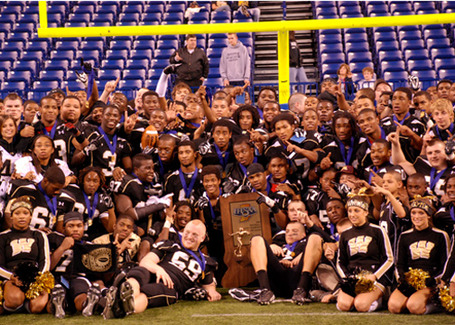 Warren Central High School is one of the most storied football programs in Indiana. The school’s most famous football alumnus is Jeff George, who won a class 4-A and 5-A state titles there in 1984 and 1985 respectively. Warren Central was bumped up to class 5-A in 1985. George went on to play for Illinois and became the #1 overall pick in the 1990 NFL draft by the Indianapolis Colts. But the football success didn’t stop upon his graduation. In the 2000’s alone, the Warriors won four straight class 5-A state titles from 2003 to 2006 and most recently in 2009 That is just incredible. Think about it, half of the Indiana state titles in the 2000’s were won by a single high school. Most programs have a difficult time winning one state title, let alone five. To claim that the Warriors dominate the state of Indiana is an understatement.

But Warren Central is also one of the largest high schools in Indiana. With between 3,000 to 4,000 students there is plenty of talent to draw from. Let’s look at the list of recent Warriors who accepted offers to FBS college football programs:

Warren Central Class of 2012 list: This is comprised of players with more than 1 offer even though some have not been ranked by Rivals yet. Tyrone Perason transfered from Seneca High School in Louisville.

Below is a list of the other graduating seniors from Warren Central's 2012 class. Kyle Faunce is a transfer and Kaleb Humphrey has only received 1 offer (WKU):

Keep in mind that the 2012 class is dynamic as ratings change constantly and players pick up offers and change their commitments throughout their senior seasons. Just yesterday, Kevin Davis and Jordan Wallace accepted scholarship offers to Indiana. So, as of this post, the tables above are accurate but they may not be in three or four months from now.

Anyways, just look at the list of those players. If a FBS college coach wanted to build a squad of 22 offensive and defensive players, he could fill it up solidly with Warren Central players from the 2010, 2011, and 2012 graduating classes. Heck, if he only wanted defense, Warren Central could easily fill that need. I'd be surprised if this year's defense gave up more than 7 points per game. I'm kidding, of course, but you get the picture. The school runs a blitz-heavy scheme with both safeties playing close to the line of scrimmage. This is one of the reasons why UC-bound Nick Temple was listed as a safety in high school but will project to a linebacker in college and why you see so much talent coming out of Warren Central on the defensive side of the ball. This powerful defense also helps the offense, as players like UC-bound OG Deyshawn Bond face intense pressure in practice and become extremely well prepared for the games on Friday nights. Even more so, it prepares them to face the bigger, smarter, faster players at the college level.

And that takes me to my last point. Matt previously wrote about the pipeline Cincinnati is building at Warren Central. This post is intended to further emphasize the importance of that relationship. Don’t you think it’s extremely beneficial for UC to create a connection with a school that won five state titles in a decade and pumped out 18 FBS football prospects and counting over the last 3 years? I thought so. If Cincinnati wants to return to the national rankings, Big East titles, and BCS bowl games, drawing recruits consistently from Warren Central and schools like it will be the key.