Down The Drive Ring of Honor: Connor Barwin; Jack of All Trades

Share All sharing options for: Down The Drive Ring of Honor: Connor Barwin; Jack of All Trades

The funniest thing about Barwin's rise to prominence around the UC campus is that he wasn't a name early in his time at UC for anything he did on the Football field. CB was lightly recruited out of Jesuit High School in the. At the start of the 2005 Football season Barwin had worked his way into the rotation at TE behind Brent Celek. Barwin played in every game that year as a back up TE and special teamer and finished the year with 8 catches for 144 yards and a TD. But it was what happened after the Football season that turned him into something of a cult figure around campus.

Even though he played basketball in high school, Barwin wouldn’t have played hoops at UC had it not been for injuries and the fallout of Bob Huggins’ firing. Describing how he ended up on the hardwood, Barwin says, "AK (Andy Kennedy) asked Mark Dantonio who he knew that could play. Dantonio had seen me play when he recruited me, and three days later I was playing against Syracuse."

Even though Barwin gave up a lot of height to many of the players he battled against on the court, he went hard for rebounds and played with the same tenacity he’s known for on the football field.

His aggressiveness and determination made him a rotation player for those rebuilding Bearcat teams. It was the hair that set off the cult of CB. That cult even created the Connor Barwin for Heisman/James Naismith facebook group. Shockingly, at least to me, I am still a member of that group. Barwin played in 43 games over two seasons for Cronin before focusing on Football for his last two seasons.

When Brian Kelly took over the program he noticed that he had something that he could work with in the form of Barwin. Always one of the best athletes on the team Barwin began to thrive in the wide open offense of Brian Kelly. His athleticism created matchup problems for defenses because he was bigger than any DB trying to cover him and faster than the linebackers trying to do the same. At the end of the 2007 season Barwin was one of the best TE's in the conference and a guy coming onto the radar screens of NFL scouts.

So it was a shock to everyone when Brian Kelly said that he wanted to switch Barwin over to defensive end where there was a definite need for an ultra athletic defensive end to terrorize quarterbacks now that Anthony Hoke and Angelo Craig had graduated. Barwin took to the position well and became an absolute star. In his only season as a defensive lineman Barwin racked up 49 tackles, 14.5 Tackles for Loss, 11 Sacks and just for fun he blocked two punts, against Marshall and UConn, and caught a TD pass against South Florida. Barwin had the most unexpectedly dominating season for a single player in recent UC history. His contributions in all facets of the game were spectacular. The defining image of CB for me will be him walking 80 yards through a mass of humanity with the Big East Trophy held aloft over his head. 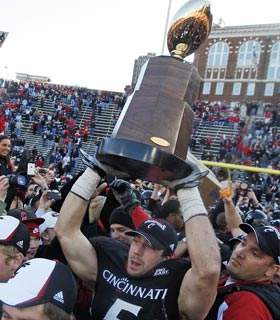