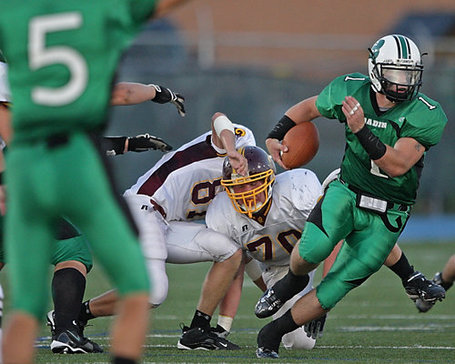 Badin High School is not exactly a hotbed for Football recruiting. Coyne is the first Ram to sign with the Division 1 school in the last decade. He had a phenomenal Junior season as a first year starter for the Rams, passing for 1,600 yards and running for close to 500 more. He parlayed that successful Junior season to a very successful spring on the camp/combine circut. He had a great showing at the Columbus Elite 11 stop. He did not wind up getting an invite to the California camp, but he did garner an invite to the Gridiron Kings in Florida. Coyne's senior season did not go according to plan. He injured his collarbone in the season opener against Woodward. That injury kept him out for most of the year, and when he did return he wasn't playing QB. It should also be noted that Coyne was the first guy to jump on board with Butch Jones in the 2011 class.

At first glance Coyne doesn't really look like a QB. He stands 6'2" and weighs 220 pounds. Truth be told he looks like a linebacker more than QB. Then again by conception of what a QB should look like is Tony Pike so you know, grain of salt. Physically Coyne can make any throw needed. Jones likes to work his QB's from the pocket and Coyne is a fit for that, despite being only 6'2". What Coyne really needs to work on is his decision making. For his career Coyne has a 11/15 TD/INT ratio. In his favor is his outstanding mobility and Coyne is a legitimate threat as runner.

Red Shirt. There is plenty of depth at QB this year and I expect both QB's in this class to take a red shirt year in 2011. There is a chance that Coyne could play another position at some point, probably as a LB. That is in play, but that decision won't be made for a while. He will get a couple of years to prove himself as a QB before the staff will entertain that option IMO.