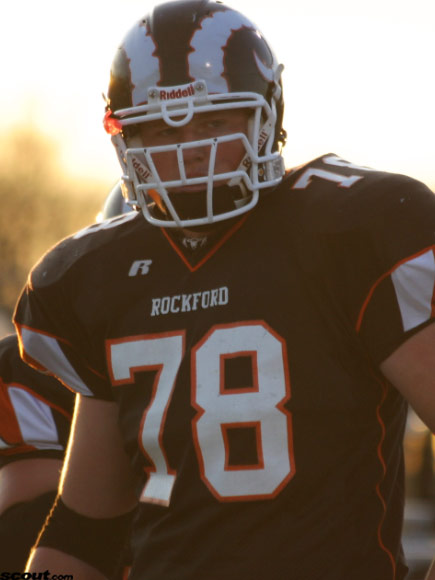 Ehinger was the last of the three offensive lineman to commit to UC, and he did so a little over a year ago. Ehinger was a two time all conference selection. He was also all state first team his senior year after leading the Rams to the state semi finals in Michigan. Ehinger was also an all Grand Rapids area and all state selection for his senior. season.

Ehinger is just a massive, massive kid. He stands 6'8" and weighs in at 280, but he doesn't look fat. He actually looks rather thin for weighing as much as he does. The other good thing is that his weight is good weight. He doesn't look top heavy, just solid. All of this is one giant check mark in his favor. The other great thing about him is that he has good feet and great flexibility. Most kids his height struggle with playing with good pad level but Ehinger has no such troubles. There was a highlight of Ehinger floating around on ESPN but I can't find it. But I still remember one play in particular where he pulled from LT and absolutely blew up the 190 pound DB sitting in the alley. Those are the kinds of plays that get coaches excited. He is a great run blocker and shows impressive athletic ability bumping up to the second level and hunting down smaller, quicker linebackers. He will need to refine his pass sets before he can make an impact at UC. But he has the athletic ability to do so.

Like most freshman lineman he is going to take a year to red shirt. He probably has enough size and weight to push hard for a spot on the two deep this year. But long term he is better served by taking a year to pack another 20 or 30 pounds of muscle onto his frame and to work on his pass set. Starting in 2012 I think that Ehinger is going to be a fixture in the two deep.