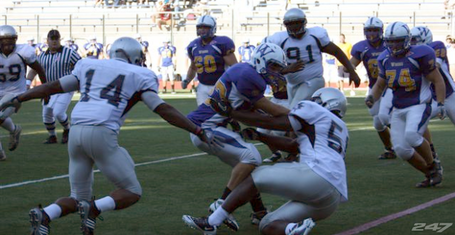 As previously discussed during his commitment post Blair is the younger brother of DeJuan Blair and the cousin of Pitt Wideout Cameron Saddler. He grew up in the shadow of the Pitt campus and attended Schenley High School. He devoted a lot of time to Basketball and was a starter on Schenley's state title winning 2006-07 team with his brother, obviously, but also D.J. Kennedy of St. John's fame. At 6'2 basketball recruiters weren't exactly beating down his door. So he changed gears and focused on Football.

I don't know for certain if Blair played in High School. I am assuming so, but I have not been able to track down definitive proof of that. Regardless the next stop in the narrative was North Carolina Tech Prep in Charlotte. NC Tech was set up with the sole intention of raising their attendees academic records to those acceptable for college admitance. There are a lot of schools out there who do similar things like Hargrave Military Academy in Virginia and Milford Academy in New York but for the most part those schools are a little more discrete about that aspect of their dealings than NC Tech. The Mission Statement says it all.

Develop talented young men into leaders on the football field and in the community. The optimum goal is to see these young men graduate from college and go on to be a success in their careers. To see young men walk within the vision that God has on the calling of their lives.

Anyways after a Year at NC Tech the offers weren't exactly flooding in and Blair moved on to Lackawana College in Scranton. I think I am contractually obligated to link to this every time Scranton is mentioned on this here blog, not sure, the language is a little hazy on the subject. Anyway, Blair played for two seasons for the Flacons and was a starter, I believe, for both of them. The journey was complete when he signed his GIA papers for UC.

For a guy at his size he is very athletic. Blair is at his best running down hill and attacking running backs and QB's in the backfield. He reads the game well and has pretty good instincts. His short area quickness and acceleration are good. He is always in attack mode, but not just in hunting down ball carriers. There are what seems like half a dozen plays where he secures the tackle with one arm and hacks away at the ball with the other.But there is a caveat to that, Blair isn't and never will be a sideline to sideline player. Stick him between the hashes and he will stay between the hashes. In pass coverage he is very good a jumping intermediate routes (drags, and slants mainly) but anything beyond that would give me major cause for concern. I am not sure he is proficient enough in his drop to play in passing situations.

Good, as exhaustively detailed elsewhere linebacker depth was non existent last season. There are reps available this season as Maalik Bomar and J.K. Schaffer simply can't play as many snaps as they did a year ago. Beyond the desperate need for linebackers Blair has another thing in his favor. UC simply doesn't have this type of linebacker on the roster. He is going to be the biggest LB as soon as he steps on Campus and his propensity to play down hill will make him valuable to the defense in clear running situations at the very least. I don't think Blair wins the starting MLB job from JK, but he is sure to play.