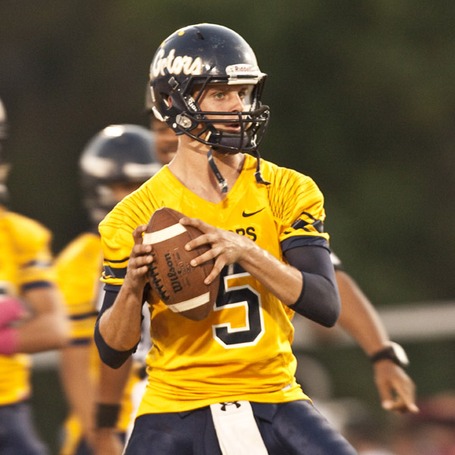 Stephen is the last in a long line of Weatherfords to play Quarterback for the Land O' Lakes Gators. Last year marked the 11th consecutive season that a Weatherford had lined up under center. Stephen was a four year starter, the previous 7 years marked a steady progression of his brothers who all went on to play Division 1 Football. The most well known of his brothers is Drew who was a multi year starter at Florida State. Before that his father and grandfather played QB at SMU, his grandfather lined up in the same backfield as Doak Walker. All of his brothers heap effusive praise on Stephen for his talent on the field. It should be noted that for all his abilities on the field Weatherford has been ensnared  in controversy for making bad decisions off the field. That being said his off field activities did not have much of an effect Weatherford's recruiting. He originally committed to USF before changing his mind in January. After reopening his commitment he chose the Bearcats four days before National Signing Day. Weatherford was an early enrollee who was on campus for the start of spring Football.

Weatherford is more like a traditional pocket based passer than his classmate Patrick Coyne. That is not say that is a statue in the pocket. He has quick active feet and is able to elude pressure in short areas very well. But it is clear to me that he is at his best in the shotgun launching the ball deep on three step drops. His mechanics seem slightly off to me as he has this weird hitch in his throwing motion. Still he has a pretty good arm, but it can, and will get stronger. That's mostly because he needs to get stronger. like a lot stronger. He has the same build as a certain other QB who wore 15.

Red shirt this year almost certainly. He needs to put on at least 15 pounds before he can physically hold up to the grind of division one football. Everyone in the Tampa area raved about how advanced he was in terms of his understanding of the game. He had free reign in high school to change plays and check protection schemes. He will be one of those guys that competes for the job next year, probably as an underdog.