Share All sharing options for: Wanted: Candidate for Athletic Director Job At The University of Cincinnati, Extensive Fundraising Experience Required 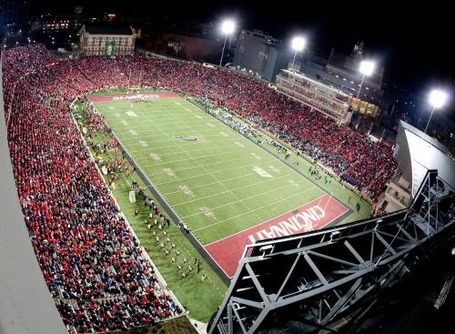 The news that Mike Thomas has taken the Athletic Director job at Illinois didn't come as much of a surprise. Gregory Williams was always going to bring in his own AD in due time. I think that in his heart of hearts Thomas knew that his days at the University of Cincinnati were numbered. That is why he was linked at various points with the AD jobs at N.C. State, and Tennessee in the last 18 months before taking the Illini job. The fact that he chose to leave before he could give President Greggory Williams the chance to remove him says a lot. At least it says a lot in my opinion.

I suppose that the logical place to start is with the budget deficit that has been staring Mike Thomas in the face everyday that he came to work. Going back six years, that's one year before Thomas took over the post from Bob Goin UC has never had a department wide surplus. I don't know when the last time the UC athletic department ran in the black, but I suspect that it was some point in the late 90's. Anyway here are the revenues and expenses for the entirety of the Mike Thomas era, plus the last year of the Goin regime.

note: data for the 2010-11 fiscal year are not yet available to the public

Mike Thomas did a very good job of shrinking the budget deficit to the point where UC could be running a surplus from the athletic department for the first time in years. What Thomas did to to get UC's fiscal house in order, more or less, should be commended. But the primary job of the AD isn't just to make his department solvent. It's a part of the job, and a big one at that but it isn't the whole job.

Truth be told what Thomas did to shorten the budget gap isn't really sustainable. The two things that he did are 1) he cut a ton of scholarships and some support faculties which saved the department some money, not a ton of it, but a sizable amount, round about 1.5 million if my memory is correct. 2) he caught lightning in a bottle in hiring Brian Kelly which transformed the Football program from a fiscal black hole into a program that ran in the black, as the Football program will have done three years running when the 10-11 numbers come out.

The end result from Thomas was good for the bottom line but it isn't particularly sustainable. You can't simply keep taking a hatchet to the cost side of things. The bigger problem is that it is very difficult for the Football program to continue to grow and become the profit center it can so easily become given the current limitations of Nippert Stadium.

Don't get my wrong, I absolutely adore Nippert. It is a one of a kind venue in an extremely unique spot. When it's packed to the rafters the noise level cranks up to something approaching a 747 taking off. There is literally nothing like it in the world of College Football. But at the same time you have to face the facts. It can't handle the type of crowds that have become routine for UC Football games. There are next to no amenities. There are none of the secondary revenue generating facilities like club seats and luxury boxes that are so common these days and a seat has not been added to the capacity in 20 years which is, coincidentally, the last time Nippert underwent renovation. Only Wake Forest has a smaller stadium among BCS schools. There is a reason that two games this year were moved down to Paul Brown Stadium, and that's because UC made a massive profit from last years game against Oklahoma. I don't ever want to move home games down to PBS. But I am a pragmatist I also know that it is pretty much inevitable, the money is too much to turn down unless UC can find a way to turn Nippert Stadium itself into a profit center, which is possible, but it will be costly.

And that brings me nicely to my next point. The department is still somewhat over a barrel fiscally. They are close to breaking even, but a huge chunk of every years revenue goes to servicing the debt on the Lindner Center. As an architectural exercise the center is truly breathtaking. As a business decision it was a colossal misstep. In an ultimately successful bid to entice the Big East into letting UC into the party Goin poured in 110 million dollars into a facility that links all aspects of the department together, yes, but it also doesn't generate a penny of revenue.

And it puts the department in a very tricky place because major capital improvements are needed both for Fifth Third Arena and especially for Nippert. But the only way that either of those projects can for forward is with private money. The state of Ohio bars any public institution of higher education from using pubic monies to fund athletic venues. The athletic department faces other challenges in the near term future. But long term the biggest questions facing the Athletic Director are what to do about Nippert, whether you keep on using it, and in the process try to make it at the very least capable of handling the crowds UC Football now draws, or if you move games downtown to PBS which is easier, but involves paying Mike Brown round about 2 million a year to play every game there. Which would obviously make Mike Brown happy, but probably no one else in the city. The other question is about refurbishing Fifth Third Arena which was designed as a multi-purpose arena but now has only one purpose, hosting sporting events and the occasional graduation. For the long term health of UC sports those two venues need to be profit centers, and right now they just aren't. That's why the next AD has to be able to sell this kind of long term thinking to donors. He/she has to be a very proficient fund raiser because the process of making those venues profitable is going to be very costly, probably close to a 150 million dollar outlay to do both. But those are two things that need to be addressed in the medium term. Otherwise I think that UC will wind up fading back in to Conference USA level oblivion in a decades time.