Share All sharing options for: Cincinnati Bearcats Football Season Ticket Sales Take A Dive In 2011 (It's Not As Bad As It Sounds) 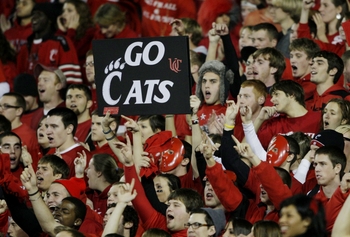 On the face of it a 22 per cent decrease in season ticket sales sounds terrible. But that 22 per cent is utterly devoid of context. It is just a number plucked from thin air that can be contrived to mean almost anything. This of course is the reason that Bill Koch ran with that particular angle. He is a miserable old man who is constantly floating in negativity like a seriously malfunctioning submarine.

But the real situation should not send anyone running for the hills about the state of the program. UC Football is still on solid ground now by almost any measure, and will continue to be. Season ticket sales are down this year yes. 12,348 sold as of today down from 15,899 last season. A decrease is a decrease, yes. But the perspective is lacking with how people are treating this news. The 12,348 season tickets sold is still either the second or third highest total in school history.*

I know that some on the message boards are treating this news like the apocalypse for the program, and it isn't. Not even by a long shot. If you want an apocalypse just take a look at Coral Gables. That's a pending program apocalypse. Selling 3,500 fewer season tickets from one year to the next doesn't come close to meeting the apocalypse criteria.
We all have to be honest about where UC is at as a program. The Bearcats are a Nouveau Riche program. The team has been around for well over a century, but for vast swathes of the programs history it has been an afterthought within the city and within the University community. The last five years have wrought a tidal wave of growth and changes for the program, almost all of them for the better. Six years ago Mark Dantonio went around campus and met with any fraternity, student organization or alumni group that would take his appointment about what he had to do to increase the interest of the students and alumni in the program. Now the student section is packed to the rim of Nippert for all the games and Student Season Tickets are a must have on campus. I won't try to explain the value of having the student body as active as it has been with the Football team down the line. Safe to say it is a very valuable thing.

UC fans seem to be predisposed to think that every little negative indicator is a heaven sent sign of portending doom. Truth be told I can probably extend that to the entirety of the city as well. Cincinnatian's on the whole are extremely passionate and pessimistic people. That was the most curious thing I noticed when I came down to UC for school. The passion is omnipresent and pessimism is overbearing. That's fine and dandy, but to be an informed fan taking a step back is a must. No one in Cincinnati seems to do that. Everyone seems to live standing on a ledge with one foot hanging over the edge. That's certainly a more dramatic way to live life, but it is frankly needless.
That's not to say that there aren't concerns with the future of the Football program. I still wonder how people will react if the Bearcats go on a prolonged streak of subpar seasons. I still wonder if the strides made in embedding College Football into the collective conscious of the city will be reversed at some point. Those are valid long term points at issue. And there isn't a soul alive who has a complete set of answers available to that particular quiz
There was another question as well. "If UC stumbles will all the fans that wholeheartedly embraced the team when they were flying so high with Brian Kelly abandon them at their time of need" (long, verbose question I know. sue me.) I think that we have an answer to that, and it's no. Consider this. It has only been 5 years* since season tickets for Bearcats Football and Basketball were untethered. At the time the move was a risk, because there was no season ticket base for Football to speak of. Flash forward to today and it was just announced that UC has sold 12,348 season tickets for the upcoming Football season. And this is announced coming not on the heels of a bowl bid or even a conference championship, but instead on the heels of the worst season (in terms of win percentage) in 12 years. I think that it is safe to say that the Cincinnati Bearcats Football program has a season ticket holder base. It might not be the biggest relative to other schools. But today's news is the only concrete evidence of it's existence to surface in decades. That is something worth celebrating to me.