Share All sharing options for: Cincinnati Bearcats Football: Previewing Austin Peay (No For Real This Time)

Well, I have done this before. But when I did it before it was in a very whimsical/farcical manor. I basically made fun of Austin Peay in the same way that a lot of people poke fun at Isaiah Pead for deciding that it would be a great idea to make his twitter handle iPead. It's simply too much fun to make the jokes when the name of the school is Austin Peay and they so eagerly embrace the ridiculousness of it. 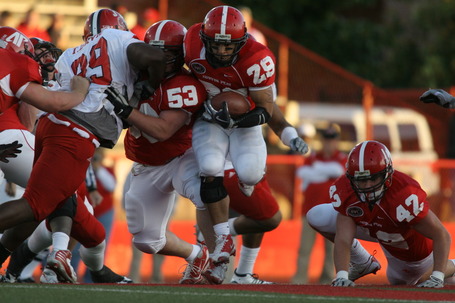 The Governors are really pretty old school in terms of offensive philosophy. Rick Christophel is a guy who really cut his teeth working with Watson Brown briefly, and I do mean briefly, head coach of the Bearcats. Watson Brown was never really an innovative offensive guy. He practiced power football, on both sides of the line of scrimmage.

Prior to taking the job at Peay, his Alma Mater, Christophel spent something like 20 years working for Brown. So its not that surprising that Christophel models his teams in the same way that Brown did. With a premium placed on being physical and dominating the line of scrimmage.

Peay is a power orientated offense. They throw a lot of heavy personnel groupings out there with two TE's and a fullback. In the backfield they have that kind of classic between the tackles thumper. Last season they had a little bit of Thunder and Lightning going with Ryan White (5'8" 199) playing the role of Thunder and Terrence Holt (5'7" 185) playing Lightning. This year Holt is gone and there isn't another back on the roster who got more than 40 carries last year so it is clearly White's show.

Given the power emphasis it's clear that balance isn't a real priority for the Govs. Last year Peay skewed run heavy, rushing on roughly 61 percent of all offensive snaps. That might simply be due to the presence to two capable and talented backs. Or it could simply be that their QB Jake Ryan (insert your own 16 Candles joke here) wasn't that good. The stats suggest that Ryan simply isn't that good. For the season he completed exactly 50 per cent of his passes with a TD/INT ratio of 7/11. With numbers like that shutting down the passing game shouldn't be a concern. But I suppose I should mention that the danger man on the perimeter is Devin Stark who caught all of 19 passes in 2010.

The Govs return 9 starters from a defense that surrendered yards and points in bunches last season. That has a certain ring to it doesn't it now Bearcat fans? So while there is tons of experience coming back, just 1 projected starter is a senior. This is still a youngish defense that is going to struggle mightily to provide much resistance to opposing offenses. But all you really need to know about this defense is that they finished in triple digits nationally in almost every defensive statistic. Keep in mind that there are just 107 1-AA teams. It's really quite an astonishing level of futility.

The Govs have a solid kicker in Stephen Stansell who was quite possibly the brightest spot in the black hole that was Austin Peay Football a year ago. Stansell will also take over the punting duties so they should at least be sound in the kicking game. Less so in the return game where the Govs all time leading kick returner Holt is gone. The candidates vying for the job have just 67 yards in returns to their name.

This should be a massacre. There is really no other way around it. Austin Peay was one of the worst 1-AA teams a year ago and should be in roughly the same category this season. I will be severely disappointed if Peay is within 21 points by the end of the first quarter. They are that bad.