The Cincinnati Bearcats Offensive Line Does Tip Plays; In Case You Were Wondering

Share All sharing options for: The Cincinnati Bearcats Offensive Line Does Tip Plays; In Case You Were Wondering

This is the tweet that started a thousand angry words in the aftermath of the Bearcats loss to Tennessee.

OK, in the grand scheme of things about the Tennessee game this was came in 10th. Maybe less. But this was something that defiantly sparked quite a bit of discussion of Bearcats fans. The initial read I had on the situation was that it was plausible. Every offensive lineman tips plays slightly. With the way they set in the stance, their body lean, their balance, with the way they look at the defense. This kind of stuff happens every play. But the only people who usually notice these things are players and maybe coaches. Most people who watch Football watch the ball and they don't pay the slightest attention to chaos unfolding in the collisions of 300 pound men. But what UC does with their offensive linemen is so blatant that anyone can see it.

What the Bearcats do with their Offensive Linemen is among the stupidest things I have seen in a while. Alex Hoffman and Sean Hooey are taught to use two different stances for run plays and pass plays. Let me show you what I am talking about. This is what the Offensive Line looks like before a running play. 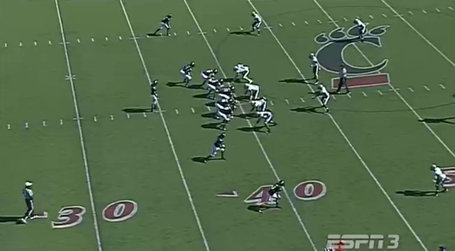 This is what the offensive line looks like on a passing play. 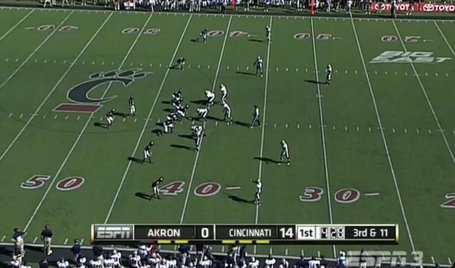 Do you see the difference? Sean Hooey and Alex Hoffman take their outside foot and place it back about 18 inches behind their front foot on the passing play. On the running play their feet are level. This is 9 kinds of stupid. Generally when announcers talk about disguising intentions they are talking about defense and their coverages, show blitz then drop into zone, or lining up in a cover 2 look and shifting to cover 3 ect. But the same thing happens on offense.

Every offense should aim to give up as little information about the play at hand as possible before the ball is snapped. The conventional way of doing that is to make the pre snap of every play look as close to identical to the previous play as possible. This is, for the most part, the way every football team in the country does it. The other option is to overload the defense with information with shifts and pre snap motion. For examples of this look at Auburn, Boise State and Mississippi State under Dan Mullen.

Most OLine coaches do coach two different stances for their tackles. One for when the quarterback is under center in the I or a single back set and a different one when the QB is in the shotgun. But for an offense like UC's which is run almost entirely from the shotgun to have a run set and a pass set for the tackles is among the dumbest things possible.

Offensive football consists of running the football and throwing the football. That's really all the game comes down to. Run or pass is the most crucial piece of information an offense can give to a defense pre snap. All play callers have tendencies in their play calling based on personnel groupings and formations. Opposing coaches study film exhaustively and can tell you the five most common plays run from X formation with Y grouping. The favorite runs and the favorite passes for every formation that the OC has used on the film they have. So in having the Tackles use two different stances the offense effectively gives the defense the play, or at the very least a strong indication of what the play will likely be. You don't have to be a Football savant to figure out that giving every defense a skeleton key to your offensive scheme might be a bad idea.