Share All sharing options for: Film Study: The Heavy Package

Since the advent and subsequent proliferation of spread offenses there has been one fairly consistent criticism of the various schemes is that the inherent advantages of spreading the field wane the closer an offense gets to the endzone. As an offense nears the goalline the field gets compressed, and that takes away the advantage inherent in spreading the field with receivers. But teams that go to the spread usually, but not always, lose the ability to get big and grind out yards in short yardage. This fact played a huge role in the Tennessee game when the Vols rose up to stop 4th and 1 calls not once, but twice. At the time I lauded the decision, in both cases, but I lamented a lack of imagination in the play calling. Last night the Bearcats unveiled a new wrinkle for the short yardage arsenal, the heavy package.

In the strictest sense UC has been using the heavy package a lot this year. But everyone calls it a different name, they call it the Wildcat. The normal definition of the Wildcat has evolved to simply mean placing a running threat at QB. But that isn't really the Wildcat, it's just having a running threat play QB. The Wildcat as designed and implemented by Gus Mahlzan at Arkansas, in other words the true Wildcat, had a key and often overlooked wrinkle, an unbalanced line.

UC has been using the Wildcat with the unbalanced line this year, but it is a stealth unbalanced line. What UC does is bring one of the backup tackles off the bench to play TE when the heavy package is in play. So while the formation might be a conventional two TE shotgun look, it would really be an unbalanced with 6 OL. Butch Jones broke out the unbalanced line again last night in a big way. In a two play sequence on the Bearcats 2nd drive of the game UC showed back to back looks that hadn't been used yet this year.

On 2nd and 3 at the N.C. State 6 UC lined with an unbalanced line with Alex Hoffman flipping to the right side. 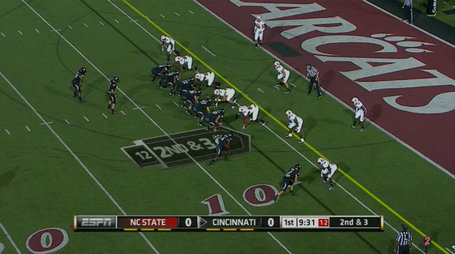 Note: This screen cap, and all the ones that follow can be enlarged by clicking on them.

The play call was just an outside zone call into the boundary. The gain for Pead was just two yards setting up the dreaded 3rd and 1. To this point UC had run on third and short 8 times for 18 yards and 4 first downs. A 50 per cent conversion rate is good in general, but for running on third and short that is quite poor. So what does UC do to solve the problem? They break out the heavy package. 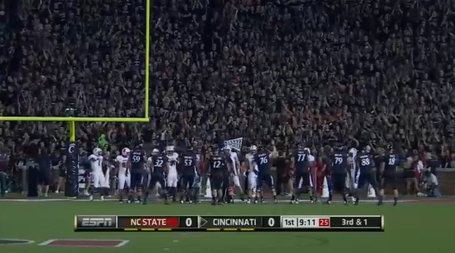 That is the initial alignment presented to the defense for this down. That is 1,400 pounds of Tight End and Lineman to the right of Center Evan Davis. Austen Bujnoch Sean Hooey, Andre Cureton, Adrien Robinson and Travis Kelce. Check out the way that NC State reacts to this personnel grouping. 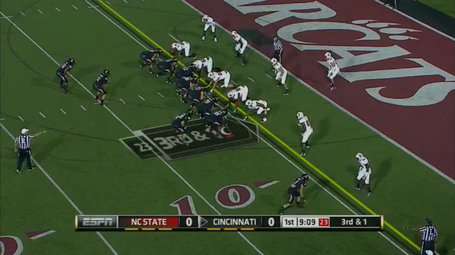 To counter the unbalanced line NC State goes with a 5 man front, or more accurately a 4 man front with a linebacker dropping to a three point on the strong side. State is actually gap sound against this alignment and they effectively have 10 men in the box. But there is a twist, a big twist. 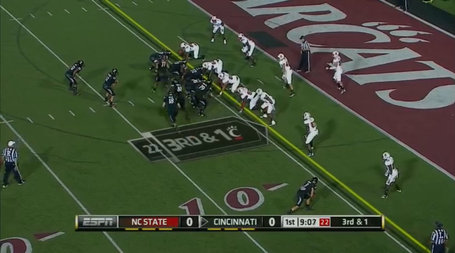 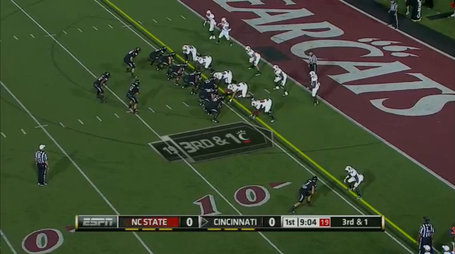 Cureton aligns as the RT, Hooey as a tackle next to Alex Hoffman and Robinson and Kelce resume their prior positions. The reason that the shift is such an ingenious wrinkle in this situation is two fold. 1) UC is not a team that shifts, ever. The offense uses a ton of Jet sweep motion, but pre snap shifts are never a part of the UC offense. The offense might shift because of a change in play call, but never because a play calls for a shift. 2) The other reason is that in shifting Hooey instead of Hoffman UC has lined up its three best linemen on the same side of the ball. 3) the final reason is that NC State doesn't adjust to the shift. Or rather they don't adjust well and wind up being outnumbered to the strong side. 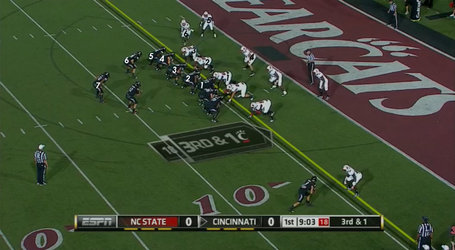 It is never, ever, ever a good thing for a defense to be outnumbered. UC winds up with 7 blockers to the strong side against NC States 6 defenders. The play call is just a QB sweep/outside zone. 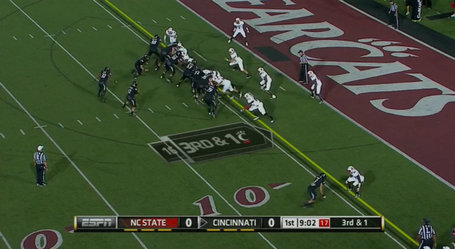 The OLine takes their customary outside zone steps, Travis Kelce crashes inside to clean up any penetrating linebackers and Zach Collaros sets his aiming point for Hooey's outside shoulder. George Winn is essentially a lead blocker. 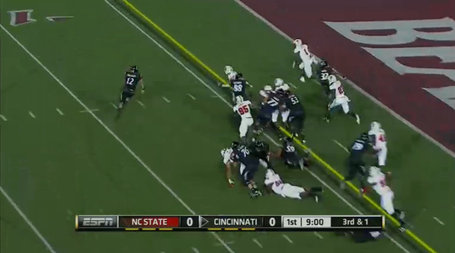 The play is over right here, Zach goes for a little flair though by diving over the tackler for a few more yards.

Now after showing this look a couple of times in this weeks game defenses do have film on this heavy package. But UC didn't show much out of it this week, and there are other things that can be done besides the QB sweep. The alignment Winn takes is suited to the speed option, play action is available and D.J, Woods is still available on the backside for a quick timing route, 5 yard curl, quick slant, speed out ect.. UC only showed a little bit from it this week. But I have a hard time thinking that this won't be a regular feature going forward into the rest of this season. UC's equivalent of the two TE I formation.