Share All sharing options for: Cincinnati Bearcats Football Recruit Round Up: Week 6 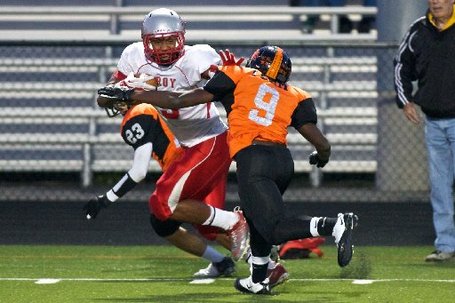 Early miscues do little to slow Maple Heights in rout of Shaw | cleveland.com
Jeremy Graves and the Mustangs roll to 5-0 in sloppy conditions

Colerain holds off Middletown, 21-13 | cincinnati.com
Andre Jones came up with a pick and helped hold Middletown to a season low output with 13 points

No. 1 Warren Central flies high over North | tribstar.com
Deionte Buckley returned from injury for the Warriors and ran fro 97 yards and 2 TDs on 13 carries, he also caught 1 pass for 45 yards and a TD. He also added a two point conversion for good measure. Josh Posley and the starting defense didn't surrender a point.

Southfield stuns Rochester Adams to make school history in an Oakland White division football game, 34-31 - MLive.com
Leviticus Payne scored a TD on a 17 yard reception and keyed a defensive effort that resulted in four turnovers by the Adams offense

Bobcats' speed too much for Howell, 45-22 | livingstondaily.com
Lester Liston and the bobcats rolled in this one. Liston had a 70 yard screen pass that went for the score and was the main cog in a ground game that ground out 124 yards.

Elder falls in final seconds to Miami Central | cincinnati.com
Errol Clarke came up with a big drive stalling sack in the first half.

Football: Plant City 56, Riverview 0 - St. Petersburg Times
Bennie Coney and the Plant City Raiders continue to roll putting up 56 points on the night. Coney had a pair of TD runs, including a twisting and turning 53 yarder

Highlands stops CovCath when it counts | NKY.com
Drake Bruns and the Bluebirds were really pushed for the first time this season and they came out on top. Bruns ended the game with 14 tackles.

How the Dandy Dozen fared and Memphis-area roundup | The Commercial Appeal
Memphis Mitchell and new Bearcat Nate Cole went down 41-30 to Craigmont. Cole contributed to a passing game that put up 384 yards on the night.

MUS Owls run rampant over Memphis East Mustangs, stifle touted RB Brian Kimbrow " The Commercial Appeal
Alex Dale returned from injury and the MUS Owls held one time Bearcat target and current Vanderbilt commit Brian Kimbrow in check, holding him to just 38 yards on 16 carries. This after coming into the game averaging just over 300 yards per game on the ground.

John Law and Atlanta Grady were on their bye this weekend