Film Study: The Inside Zone

Share All sharing options for: Film Study: The Inside Zone

I know, you must be asking yourself internally what two film studies? "Boy, does this guy know how to speak directly to my Football heart" and/or "I don't really care. How do I make him stop." You might be right on the first count, the goal of the second count has nary a chance of success.

Like most teams that operate exclusively from the shotgun UC really only has two blocking schemes when it comes to running the football. The inside/outside zone is possibly the most ubiquitous of blocking schemes at the collegiate level, and even at the next level as well. Chris from Smart Football has a thorough explanation of the differences in zone runs. If you spend your Saturdays/Sundays watching Football read the whole thing, but the money passages are these.

On outside zone plays, the offensive linemen take a bit more of a lateral first step and try to reach the defender across from them. He wants to get his body between the defender and the sideline...[.]

Once the defense begins flowing too fast to the sideline, coaches typically dial-up the inside zone. The rules are the same,except this is more of a drive block as the aiming point for the running back is inside. The play often results in a cutback if the defense is flowing fast for the outside zone,...[.]

For the most part UC will just run these two plays 30 or 35 times a game. There are other specialized blocking schemes (such as draws, counter ect,) in the playbook, but those are constraint plays. Think of the inside and outside zone then like the Driver and putter in your golf bag, the two clubs that are assured to be the most heavily used during any round of golf.* While the basic scheme remains the same there is an important wrinkle that UC has adopted this year in how they run the inside zone. What follows is a step by step explanation of said wrinkle

* This anaology has 10 kinds of holes in it. And if an avid golfer and offensive line coach ever happens to read this I will surely be taken to task

That is the play at live speed, now its time for some specifics. 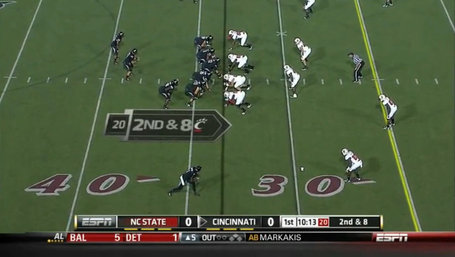 This is the second play after the Drew Frey interception. UC is in a base personnel grouping and formation 2x2, 3 WR, 1 TE. Isaiah Pead is slightly offset to Zach Collaros right. N.C. State counters this alignment with a Nickle package with 4 down linemen and 2 linebackers. 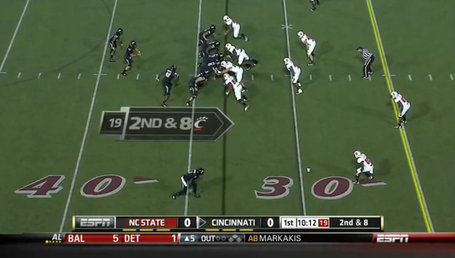 At the snap the linemen take their inside zone steps. Two  thing to notice. One is that Alex Hoffman is not blocking the weakside defensive end. If you are a defensive lineman there are only 3 reasons why an offense wouldn't block you. You are either going to be trapped, read or screened. The other thing to notice is Adrien Robinson running against the plays direction behind the line of scrimmage. At the snap all three possibilities are in play for said defensive end. 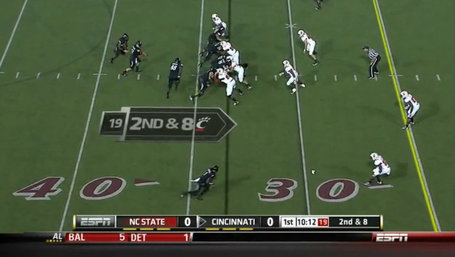 UC is a team that uses a fair bit of zone read in the gameplan. It isn't a staple of the offense by any stretch. On most running plays there is no read at all. But the personage of Zach Collaros presents problems for defenses because he can run the ball at any time and he is a threat to gash a defense. So most teams that UC faces will use a scrape/exchange to combat the zone read and bottle up. Click the link to get a complete explanation, but the key point is that the scrape exchange involves the DE crashing hard inside to take the RB and the linebacker looping around to clean up the quarterback. This is what N.C. State is doing in the above frame. 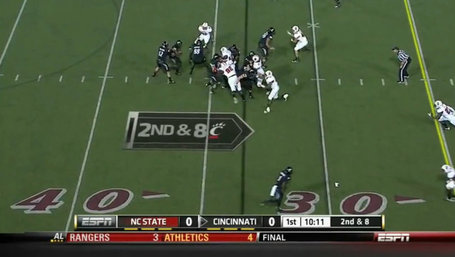 We are maybe 3/4's of the way through the plays first second and we have reached the mesh point with Pead and Collaros. Alex Hoffman has made his way to Audie Cole and Adrien Robinson is squaring up the crashing defensive end. On the playside it is hat on a hat as Randy Martinez, Evan Davis, Austen Bujnoch and Sean Hooey have effectively walled off the 4 strong side defenders. This angle doesn't do it justice, but there is massive hole for Isaiah Pead to run through. 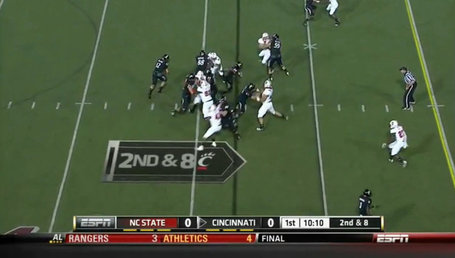 See, massive hole, which Isaiah Pead is already through, with no one within 8 yards of him. Also notice Zach carrying out a proper run fake. 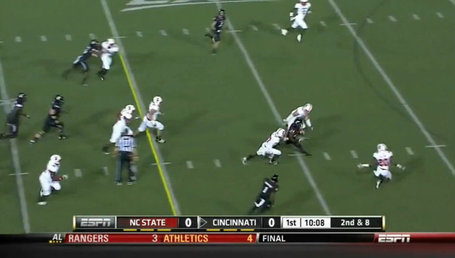 15 yards down field from the LOS NC State has managed to Triangulate the whereabouts of the Football and/or Pead. It will take another 5 yards to get him to ground.

Football is a copycat sport, and UC is by no means the first team to use this kind of blocking scheme with wild success. Oregon State was the school that came to mind for me when breaking this down. And I am sure that someone did it as well before them. But the little wrinkle of having Robinson work back across the direction of play to crack down on the DE is pretty much the perfect antidote (for now) to combat the scrape exchange.