The Play Action Bubble Screen and The Constraint Theory of Offense

Share All sharing options for: The Play Action Bubble Screen and The Constraint Theory of Offense

If you follow me on twitter (which by the way you should totally do) you probably noticed an exchange between me and Chris Bains about a post he had over at his new site Bearcats Nation. The basic premise of the post is that the bubble screen that UC uses every game should be scrapped because of it's relatively low yields in terms of yards gained. Chris re watched the N.C. State game and charted the plays. The result 5 completions, 5 yards, that average shouldn't be that hard to figure.

I get the framework that Chris is operating from. UC has other plays in the playbook that could conceivably gain more yards than the bubble screen. But there are few offenses in college Football that just run plays. For most, if not all offensive coordinators, there is an underlying schematic framework to every play call in a given game. In other words every play called in a game serves a specific purpose towards the larger goal of moving the ball to and past the oppositions goal line.

Every offense has its base plays. The handful of plays that will get run over and over again in the course of a game. For most teams there are anywhere from five to a dozen plays upon which the entire scheme is based on. UC is no different the Bearcats have 2 base run schemes, the inside zone and outside zone and three base passing concepts. Any and every team that UC will face in the course of the season knows exactly what those plays are. And conversely they will know the coverages schemes, blitzes and techniques that are best suited to stop each of them. I talked briefly about this selfsame topic only yesterday about UC's solution to the scrape/exchange technique defenses employ to stop the read option.

So if every team knows exactly what an offense does, and how best to stop it, what exactly stops defensive coordinators from loading up against those plays? The answer is nothing unless the offense calls plays to constrain the defense. For UC the play action bubble screen is the most common and most heavily utilized constraint play in the book. Chris has the right idea about the PA bubble being a constraint play, but he is wrong about what it is constraining.

Even though this is one of Butch Jones’ ‘set-up’ playsets to get wide receivers open deep on subsequent plays, the bubble screen isn’t doing its job. Therefore as it’s currently being ran the play is useless and has no business in this offense.

The purpose of the PA bubble is not to get receivers open in the passing game. It does not set up anything down the field on future passing plays. The purpose of the play is to keep the numbers in the box favorable for the run game. 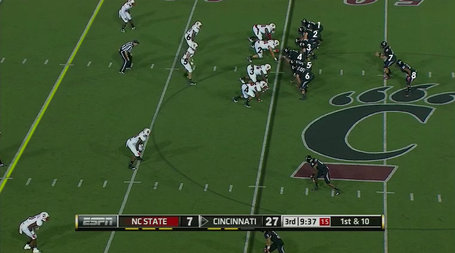 The first thing that Zach Collaros does pre snap every play is to simply count defenders. UC's base personnel grouping is 3 WR 1 TE usually aligned 2x2. Most defenses counter that personnel grouping with a nickle package, usually but not always with a cover 2 or cover 3 look over the top and that is very favorable for UC because the Bearcats simply have more numbers in the box than N.C. State. UC has six blockers to face 6 defenders in the box and N.C. State has to assign someone to watch the back, in this case George Winn, and Zach Collaros because he is a running threat. The Wolfpack have to account for 8 offensive players with 6 defenders, which is suboptimal. This is the defense that Mike Bajakian wants to see on every snap because it gives UC a clear advantage in the running game, but he has to continue to call plays that force the defenese to align like this.

UC is a zone running team, and zone blocking schemes are highly susceptible to backside pursuit because everyone up front steps playside. If the front seven is gap sound and strings the play out towards the sideline it is very easy for a defensive end/outside linebacker/corner to track down a back from behind for a TFL. So there has to be some sort of threat to the backside to make sure that that the backside players don't go screaming into the backfield disrupting the running game, and the play action bubble screen does the job perfectly. It makes the nickle/OLB (depending on defensive personnel), corner and safety stay home. It's a simple play, if I can borrow Chris's diagram. 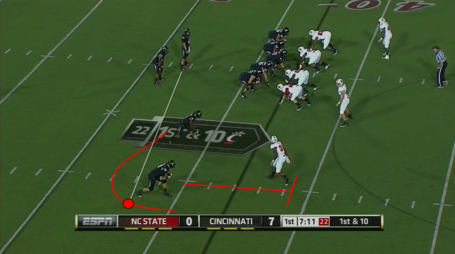 The key point about this is that for UC the PA bubble for UC isn't a specific play call at all, it is actually a read by the QB. If you watch closely when UC runs away from the two WR side the backside receivers will run the bubble action automatically. But they don't get the ball automatically, they get the ball based on Zach's pre snap read. If the alley defender, be it the Nickle a linebacker or safety is cheating inside (in the screencap State runs a firezone with the Nickle and OLB) Zach will decide pre snap to throw the bubble, which is exactly what happened on the play above.

The entire point of this bubble action is to occupy the backside defenders, and it does just that. backside defenders must stay home because if they get it wrong it is a big play for the offense because all that is needed is one block for the bubble man to break out for a 10 or 20 yard gain. The defense must commit 2 or 3 defenders to the backside to prevent that from happening. Example, again stolen from Chris. 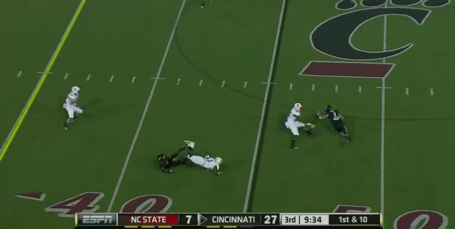 For most of Thursdays game N.C. State committed three defenders to stop the bubble screen. That obviously leaves 8 defenders to deal with the other 9 Bearcats. Again, thats a win for UC. And the very reason why this play will continue to be run every week. In the larger confines of the Bearcats offense it doesn't matter if UC gets 1 yard per snap on the PA bubble because it diverts defensive attention from the running game. It is the consummate constraint play.