Share All sharing options for: Sean Kilpatrick Expects To Play Against Syracuse

5:40 Update: Mick Cronin has announced that Kilpatrick will play tonight. Via Jeff Goodman. No word on starting or not, I would suspect that he does start.

The Cincinnati Bearcats leading scorer and top offensive playmaker Sean Kilpatrick expects to play in tonight's match up against the Syracuse Orange. Kilpatrick was injured during the West Virginia game on Satruday afternoon and was not on the floor for the closing moments of that game. Kila did take a pretty tough fall while going for a block against the Mountaineers in the overtime period. 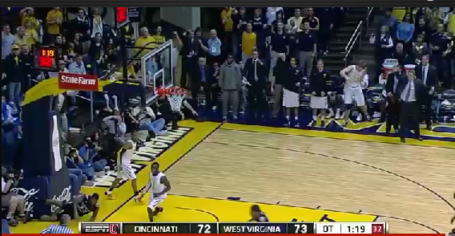 I didn't see Kilpatrick favoring anything after the play, and I fully admit to not being hyper vigilant on the matter. Regardless Kila was substituted out of the game with 14 seconds left as Jermiah Davis took his place. Some comments by Mick Cronin in the postgame lead to a lot of speculation over the health of Kilpatrick. No one outside the team really knows anything. At this point the only thing that we as Bearcats have are the tweets that Kilpatrick has sent out over the last 24 hours, which sound determined and encouraging. SK obviously wants to play desperately, but the ultimate decision lies with Mick and the team doctors. I for one expect to see him out there and starting