Regular starters Drew Frey and Anthony McClung sat out the Fordham game last Sautrday due to injury concerns. Will either man be ready to play against the Toledo Rockets on Saturday?

For the second time this season, (the other being the Delaware State game) Drew Frey sat out against Fordham due to injury. Also joining him on the bench Saturday was Anthony McClung. McClung did dress, but did not play. Both will play against Toledo, Butch Jones said as much.

"McClung will play. Drew Frey will play. They will be full go full padded today at practice."

So it isn't surprisign to see both in the depth chart. It was slightly surprising to see both listed as co starters. Malcom Murray is Frey's co starter, and the resurgent Danny Milligan is co starter in the slot. Barring a set back in practice, or even on game day, McClung and Frey will resume their positions.

Moving on to other news the battle between Damon Julian and Alex Chisum continues to rage. Chisum had his best game of the season, by far, against Fordham and came up with the catch of the day going up between the safety and corner and coming down with a 25 yard gain.

The only other development is at RT Parker Ehringer continues to draw the start. Sean Hooey started the first two games of the season, but hasn't played since. No word on the status of Hooey for the Toledo game. Expect Ehringer to draw his 4th straight start at RT, and his 5th of the season. 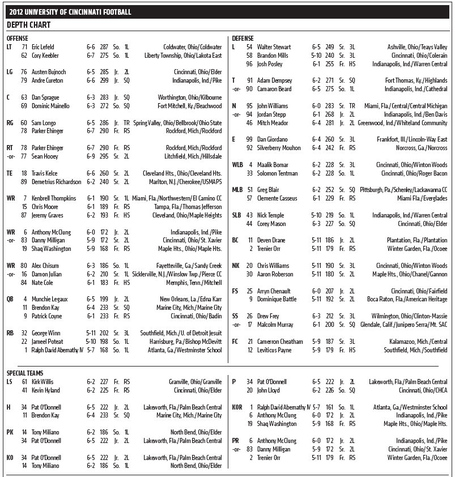