With a young rising star in Matt Campbell as its Head Coach the Toledo Rockets are managing to stay ahead of the curve offensively. One of the ways that the Rockets manage this is by packing concepts.

Share All sharing options for: Film Study | Packaged Concepts and the Toledo Rockets

If you turn on the TV on Saturday to watch West Virginia, Oklahoma State, Oregon, Baylor or one of the dozen or so schools igniting Football fields from coast to coast a question surely arises. How do these teams continue to make the spectacular look routine. They manage it because the routine play is more spectacular than ever before.

That seemingly straightforward screen pass to Ryan Grant suggests that now things are no longer so simple. There's a new game, and it takes those time-tested plays and blends them into something new. It blends them so seamlessly that it threatens to upend the very idea of "run" and "pass." These are the "packaged plays," and because of them real football is ahead of the video games — both old and new. The answer to "What play was that?" is no longer so simple, because it's increasingly "All of them."

Coaches like Chip Kelly and Dana Holgerson have driven the trend for nationally recognized teams/brands, and thus are getting the lions share of attention/credit for this trend which is pushing offenses into heretofore unheard of realms of efficiency. Its hard to be right, defensively, when the offense always has the option to make you wrong. That is where packaged concepts come into play.

Last Saturday a game of hyper-efficiency chicken, as Our Daily Bears calls it, broke out between Toledo and Eastern Michigan. A bomb detonated in Rynerson Stadium during the third quarter. The fissionable material in this case was the defenses of the Eagles and Rockets.

That third quarter saw the two teams combine 55 points, and 578 yards, on just 34 plays, and those stats don't even count the kickoff return for a TD by Bernard Reedy. In that third quarter both teams averaged 15 yards per play. I could go on with the superlatives and numbers, but this kind of gets to the point.

In that kind of explosion little things, no matter how important, can get lost in the shuffle. Both offenses were good, but they worked in different ways. Eastern Michigan has a much more traditional attack, exploiting massive holes and missed assignments in the UT defense. Meanwhile the Rockets use a boatload of packaged concepts to leverage open holes, and then they sent Bernard Reedy through them.

One play in particular stands out to me, and it happened with 8:59 left in the third quarter.

This is, in essence two plays in one. The offensive line is blocking for an outside zone running play to the right hand side. Bernard Reedy motions into a bubble screen to the left hand side. Terrence Owens, the Rockets QB, simply reads his key defender and makes a decision on what "play" to run. 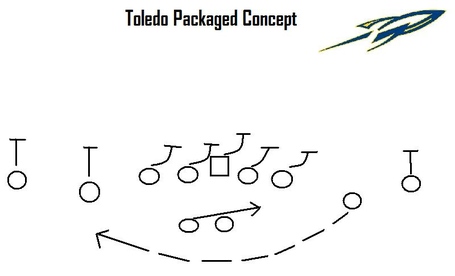 Lets take it frame by frame. 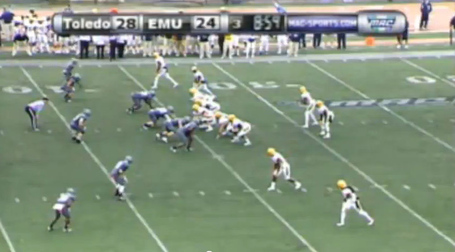 This is the pre snap look for Toledo. 2x2 with a back. This is a base set for the Rockets, with no real tendency, in terms of run or pass. EMU is in a Dime look with one linebacker. 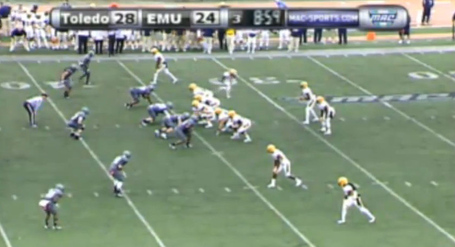 Reedy starts his motion which will take him behind Terrence Owens and David Fluellen. 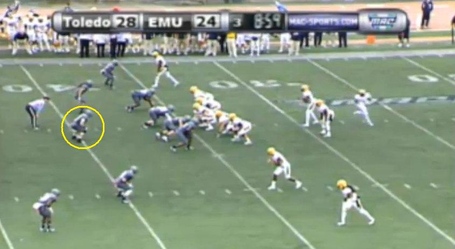 EMU moves the man who was covering Reedy into the box. Terrence Owen's read on this play is the linebacker. The linebacker dictates where the ball will go, not so much by what he does, but by where he aligns. That makes this play, in essence, an option play. 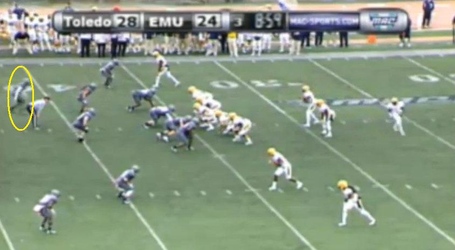 Just prior to the snap Eastern Michigan rolls a safety into the box, which gives the Eagles a numerical advantage against the run. When that happens someone *cough* linebacker *cough* has to bump out to cover the third receiver to the backside. When it doesn't happen EMU is misaligned, and fatally so. In essence the Eagles gained a numerical advantage to the playside, at the expense of the backside where they are now out numbered. 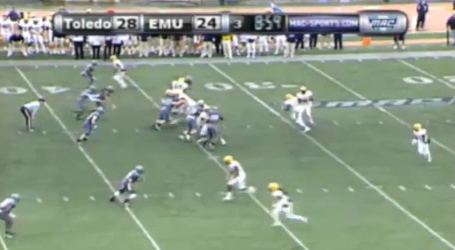 Owens read is the linebacker, and he hasn't moved, that makes Reedy the read for Owens. 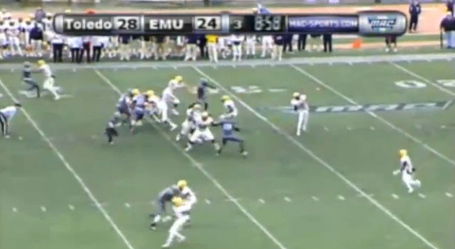 The ball is out, and the linebacker is 15 yards out of position. 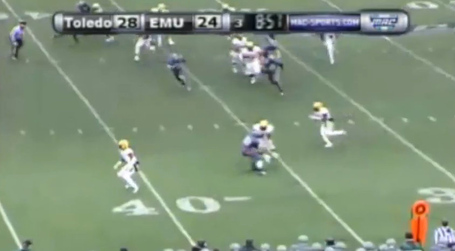 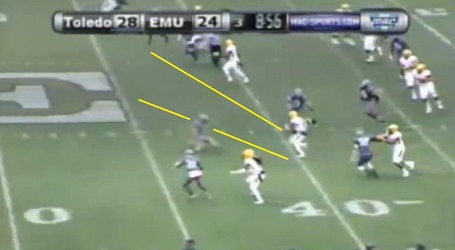 A hole appears, and it is caused by the misalignment of that linebacker. If properly aligned the hole that Reedy is bursting through wouldn't really exist. 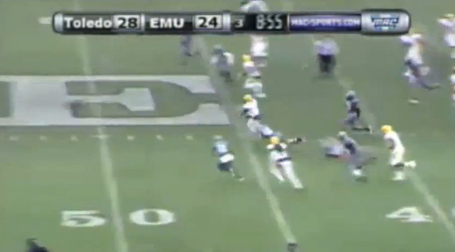 Now the safety and linebacker are diving at the feet of Bernard Reedy. Its already too late. 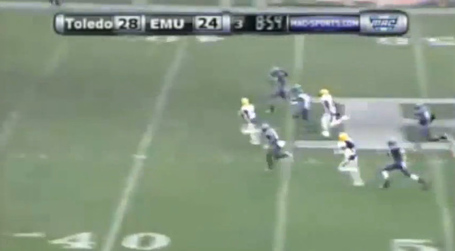 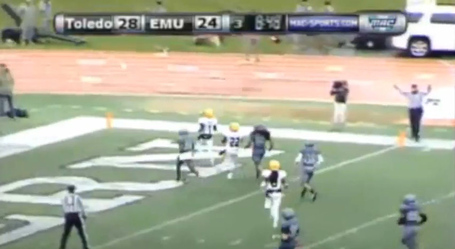 As the play above demonstrates pretty clearly the Rockets put constant stress on a defense, and they can exploit the smallest of mistakes in a big, big way. In general, these kind of offenses are disconcerting. They are going to gain yards, they are going to score points, almost regardless of who they play.

The concern for Bearcat fans is based on the one abiding principal for the Bearcats on defense; Play Fast. The Bearcats are built for speed, and field one of the lightest defenses in the Big East, and certainly among the top 25. As good as that idea has been for UC, both last season and this year. It is not without risk.

The Bearcats aggression has been known to result in big plays for the opposition. John Jancek has been keeping it conservative for the last two weeks on defense, but it hasn't really prevented big chunks of yardage. In the last two games UC has allowed 9 plays of 20+ yards, that's not reassuring. The biggest question for Cincinnati Saturday won't revolve around the offense, its how Jancek and Co. will choose to approach the Rockets multi-faceted approach.

The approach from the last two weeks would probably result in a mountain of points, yards and diving defenders, the kind of which its difficult to anticipate. Arizona had more success than anyone else slowing the Rockets down, and they did it by constantly attacking defensively, putting pressure on Terrence Owens and his receivers. Its not the Bearcats way to play tight man to man defense, but they have to take the game to the Rockets.