In the third quarter of the Cincinnati Bearcats game against the Toledo Rockets UC took the lead on a good throw, and a great adjustment from Damon Julian. With the extra point up and good the Bearcats took a 20-19 lead. A lead that would last for all of 18 seconds.

5 years, more or less, is the amount of time that elapsed between Bernard Reedy's dagger of a kickoff return Saturday night and a similar return by South Florida's Mike Jenkins in the Bearcats wild 2007 win over the Bulls. 61 games elapsed in between. 61 games that saw the Bearcats field a top notch special teams unit again and again. It all went to shambles Saturday, and at the worst possible time.

There are three key factors to Reedy's return, so lets start with the most obvious one, Reedy. Reedy came into the contest on a hot streak, the hottest streak you can have for a return man. In back to back contests Reedy had taken kicks to the house, a punt against Central Michigan, kick off against Eastern. He was as hot a return man as is humanly possible without spontaneous combustion.

Second, Pat O'Donnell had been manning the kickoff spot all season, and doing a marvelous job. He ranks in the top 10 nationally in yards per kickoff, and touch back percent. But he picked up a hamstring issue, and Butch Jones was not happy with his placement of kickoffs when, you know, they didn't fly 8 yards deep into the endzone. So there was a competition with O'Donnell and Miliano. Miliano won.

Third, the Bearcats decided to address the threat of Reedy with a directional kicking scheme. Butch Jones from Tuesday's presser.

The scheme Butch speaks of is basically a coffin corner kick where you put the ball deep into the corner of the goalline and sideline and the return man must decide if he wants to risk the return, or make a call on whether the ball roll out of bounds. Best case scenario, the ball will be hit to land two yards from the sideline, five yards from the endzone, at which point the return man has no choice but to return the ball into the teeth of a coverage unit designed to trap him in the corner. This kickoff was obviously not the best case scenario, so what went wrong.

Every Down The Drive readers favorite phrase, lets take it frame by frame. 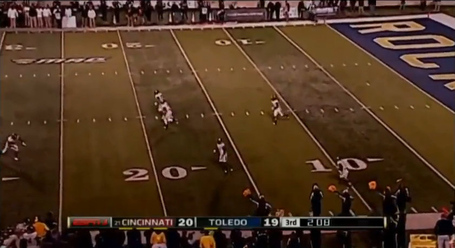 Not a great kickoff from Miliano, 9 yards short of the goal line, just outside the numbers. Not only that, but there isn't a lot of hang time on the kick. Notice that no Bearcat is within15 yards of Reedy, that gives Reedy more than enough time to scan the coverage for weaknesses. 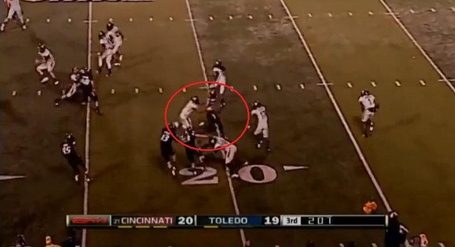 This is the block in the back that wound up not being a block in the back. It is impossible to tell if the Toledo player actually connects with Malcom Murray. Beleive me, I've watched the clip 20 times, its inconclusive at best. The UT player clearly intended to block him in the back, I just don't know that he did. As for Reedy, he's running to daylight. 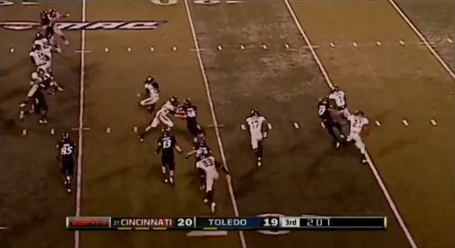 This frame illustrates the risk with directional kicking on a kickoff. Its great if you can contain the return man in the corner. But if he breaks contain it gets really dicey, really quickly. Five Bearcats have wound up overrunning the play, and are in no position to make a difference. 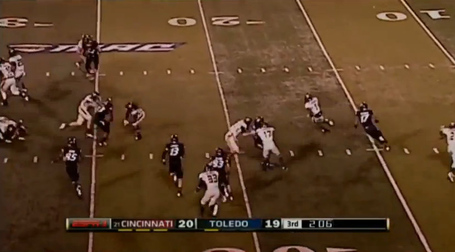 I see a hole, Reedy sees a hole. 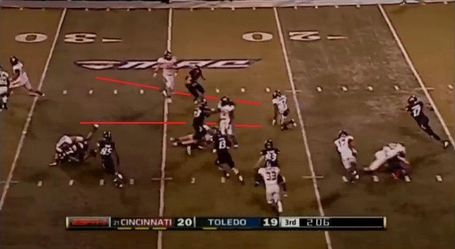 Hole. Corry Mason (I think, its hard to tell with the low quality video) is in the way, sort of, but he is not squared up, trying to break down on the run. Oh and tackle the most elusive guy on the field. 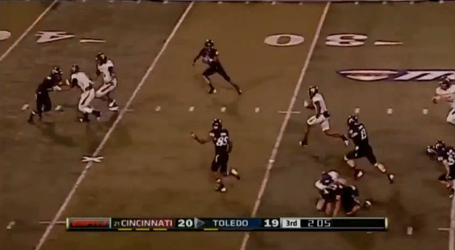 Mason dives and misses, Reedy is at full speed, has blockers, open space and no Bearcat is really in position to make a play. Its OK to swear. 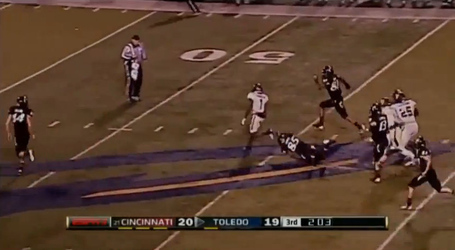 Bruce Horner, resolute special teams warrior takes a dive and misses.Tony Miliano himself is next and takes a swing... 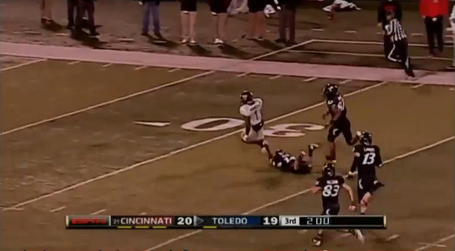 and whiffs. Jeremy Graves hasn't a hope in hell of catching Reedy. 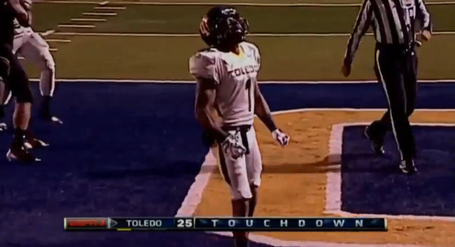 This is why special teams are special. This breakdown can't be pinned on anyone in particular. Everyone on the kickoff team played their part. Miliano kicked a poor ball, 6 guys overran the play, Malcom Murray kinda, sorta, maybe got blocked in the back with no flag, and lastly Bernard Reedy made guys look silly in space.

Kickoff coverage is a complex system, and with complexity comes the potential for compounding errors. Three four small errors led to one big blunder. In and of themselves neither of those four mistakes would result in a kickoff return for a touchdown. Have all four of them at once and a TD becomes preordained. That being said, Reedy can't return a ball that lands 9 yards deep in the endzone.