It is almost time to put the Bell up for grabs once again. As has been the case for most of the last 6 years the Bearcats are going to step foot on the friendly confines of Nippert Stadium as heavy favorites in this annual rivalry. This is also the second of what will be 10 games in 10 weeks for the Bearcats. As such the Bearcats are nursing some injury issues.

Right Tackle Sean Hooey missed the Virginia Tech game with an undisclosed lower leg injury. Hooey has had injury issues in the past, but I have heard nothing suggesting a recurrence of those issues. Hooey is listed as the starter, but Parker Ehringer, who stepped in admirably against the Hokies, is listed as co starter. If healthy Hooey is most likely to go.

Meanwhile, at Wide Receiver, Alex Chisum appears likely to draw the start, despite the star turn of Damon Julian, fresh off a rather iconic catch. Julian is listed as a Co-Starter this week. Both will likely see a ton of snaps against the Redhawks.

Flipping to defense the only news to speak of is the formal acknowledgement that who gets listed with a start at defensive tackle doesn't really matter. Both interior spots are listed with Co-Starters, John Williams and Jordan Stepp at the Nose, Adam Dempsey and Cameron Beard at the DT spot. Williams and Dempsey started the first two contests, Beard and Stepp started last week against Virginia Tech.

Drew Frey and Arryn Chenault, UC's starting safties, missed the end of the Virginia Tech game. Both are presumed to start. 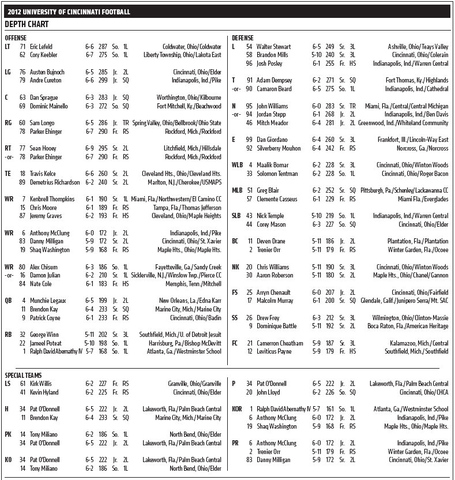