The Syracuse Orange are coming to Nippert Stadium for a game tomorrow afternoon. That means it is time for the weekly look at the Bearcats depth chart.

Adrian Witty has been the biggest surprise the last couple of weeks for the Bearcats. Witty started the year as Drew Frey's back up, and heir apparent, at the strong safety spot. But the return of Dominique Battle has shifted roles a bit among the back ups. Battle is now the back up at SS and Witty has been moved around a bit. He now finds himself at nickle back as a co-starter with Chris Williams because of his play.

Another development has been at Tight End. For most of the season Demetrius Richardson has been Travis Kelce's primary back up. Richardson had an excellent camp at higher ground, but he did benefit greatly from Blake Annen picking up an injury. Annen is now healthy and has resumed his position as Kelce's back up.

Lastly there are four running backs listed on the chart. George Winn, Ralph David Abernathy IV, Tion Green and Jameel Poteat. There is not, officially, a line drawn between the first two and Green and Poteat, but there may as well be. RDA4 and Winn both have more carries than the Green and Poteat combined. 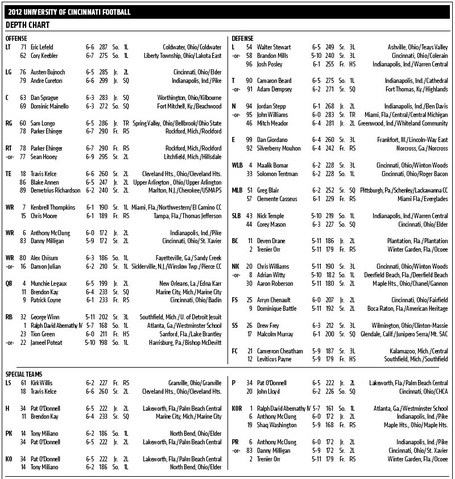