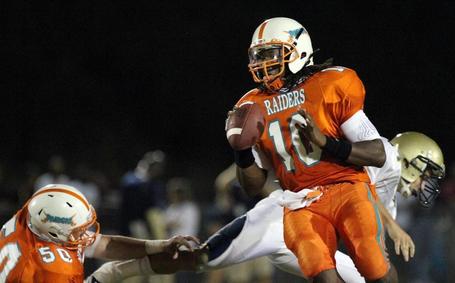 For most high school seniors signing day represents the cullmination of years of years of hard work, blood and treasure. It's the moment when all that effort finally comes due and they get the reward for all that they have worked for. For 9 members of the class of 2012 though today is just another day. For those 9 guys it is just another day because they are already enrolled at UC and are taking classes, lifting weights and generally getting acclimated early to the life of a college athlete.

Put simply Bennie Coney is probably the most singularly talented Quarterbacks to ever cast his lot with the Bearcats. Coney is one of two Florida signal callers to enroll early at UC. He regarded is one of the more talented quarterbacks in the state of Florida in the 2012 class. Some would go as far as to call Coney the best quarterback in the state of Florida. Most scouting services rank Coney as one of the 20 or so best QB's in the country His talent is beyond reproach, but it has to be noted that he has struggled, at times, between the lines. His senior season started out with a ton of promise. Plant City started out 7-0. But the Raiders dropped their last three games of the year and missed out on the playoffs. Bennie has a very bright future with the Bearcats, but there is no doubt that he is still a little rough around the edges.

Norvell is the second QB in the class of 2012 from the state of Florida. For most of the recruiting process Norvell was a Marshall commitment. But he took a visit to Cincinnati for the Louisville game in October. He eventually came to the conclusion that Cincinnati is where he should be. Norvell is a more prototypical pocket passer. His height and dimensions scream "Tony Pike" and like Pike he has deceptive ability running the Football. Norvell has plenty of talent and looks very polished in terms of his mechanics.

In the last few classes the Bearcats have brought in a slew of short, slight, speedy backs. Guys like Ralph Abernathy and Akise Teague. Those guys are for the most part perfect fits for Butch Jones's offense. But there is always a need for a more direct approach to the position. And that is where Buckley comes in. Like those other guys he isn't the tallest of backs, but he is a physical north south runner. He is bringing a more physical style to the position. As an added bonus Buckley is excellent catching the ball out of the backfield.

Dowdy is just an exceptional athlete. You know how I know this? Because he returned kicks for his high school and was a genuine weapon for the Vikings. There aren't many guys at his size who are capable of making the open field plays that Dowdy routinely made. The crazy thing about Dowdy is that as big and as fast as he is now he has never spent time in a full time strength and conditioning program. He is a great athlete now, and he's only going to get better. Dowdy could wind up on defense at UC, though I think the immediate need for depth is greater at TE. Here are his defensive stats.

One of four Warren Central Warriors to join the Bearcats in this class. Burt is a guy that could wind up playing several positions along the defensive line. For Warren Central Burt played as a strong side defensive end. With the Bearcats he will probably start at the same spot. But he has the frame to add weight and move down and become a pass rushing defensive tackle.

The third Warren Central early enrollee. Posley played weakside end opposite Burt for the Warriors. He has been recruited to play the hybrid cheetah position that was occupied this year by Walter Stewart and Brandon Mills. Posley is a more athletic than Burt, but not quite a powerful. The most impressive thing about Posley is his get off. He is always the first guy off the ball which allows him to get a jump on the offensive tackles in pass sets and allows him to set the edge against the run. Just a tremendously sound football player.

Clarke is a guy who sort of lurked in the shadows for Miami Central during last season's title run. This season he really came into his own this year for the Rockets. He was one of the leading tacklers on the team with 85 tackles to his credit. 25 of them coming for a loss. In a lot of respects Clarke is a lot like his former teammate Dwight Jackson. Really good against the run. Understands leverage, disengages from blocks well. He is also really good on blitzes. But there is a tendency to get lost in coverage. The best (and worst) of Clarke is on display in this video from the state championship game against Armwood. Clarke is #3 in black.

Brown is a little bit like Clarke in that he is really raw. He only played two years of Football at Lawrence Central and it shows. It's not that he looks bad at anything. He flashes a ton of athleticism on film and has a great deal of potential. It's just there are certain things that are somewhat innate for kids that have played a lot of football. His tackling is where it shows up the most. He is a very effective tackler, but I wouldn't call his tackling picturesque. Brown is a big safety and I can picture him sliding down to a weakside linebacker position at some point.

Marcus Foster is just a great Football player. He played both ways for the Trojans this year. He will be a safety for the Bearcats. Though he has played corner for most of his career at Troy and could conceivably start out there before moving to Safety. The past season and a half Foster played safety. I think that is going to be his best position for the Bearcats because of his combination of size and range. A nice bonus are his ball skills which would put a lot of receivers to shame. Of all the defensive backs that are being brought into this class I think Foster has the most potential and the highest ceiling.