Share All sharing options for: Football Recruiting In Ohio, Another Semi Scientific Breakdown

Back for a second time, even though you might not want it. Football has a long and storied tradition in the state of Ohio. The state also has a well deserved reputation for producing top notch Football players for colleges across the nation. The state is generally considered one of the 5 or 6 best in the country when ti comes to producing players. The state can't begin to touch the big three of Florida, Texas and California. Not a big enough population and urban areas that are quaint in comparison. But Ohio is generally lumped in with Georgia, and Pennsylvania because two of those three generally round out the top 5 in a given year. The class of 2012 in Ohio produced 84 AQ signees which is up 9 from the class of 2011.

With that kind of talent Ohio is frequently a battleground state for AQ conference teams looking to supplement the offerings in their own states. 24 different schools signed players from Ohio in the class of 2012. As per usual the Big 10/11/12 lead the way. 11 of the 12 Big 10 schools signed a player in the 2012 class. The only school that didn't? The Reigning Big 10 Champions Wisconsin. Here is the complete run down of all the schools active in the state this year.

With basically the entirety of the Big 10 active in recruiting the state you would expect the Big 10 to lead all conferences in terms of signees, and that did happen once again this year, as it did last year. 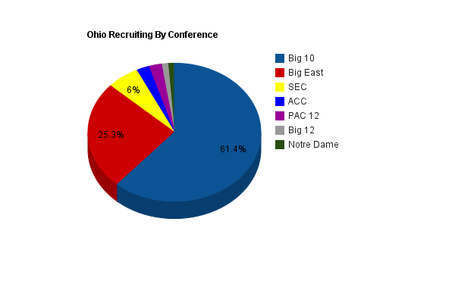 An Uptick In Quality

One of the things about Ohio's class last year was that there wasn't as much depth. The top was as good as ever with Braxton Miller leading the charge. But the depth wasn't as good as people have come to expect from the state of Ohio. That changed in a big way this season. Adolphus Washington was the signature player in this class, but there was a lot of talent at the top of the class. 9 different players received an aggregate star rating of 4 higher from the four major scouting services*

Just missing out on this list are two schools. One familiar and one wholly unexpected. West Virginia has hit Ohio hard since the Rich Rod days and did so again this year nabbing 4 prospects from Ohio. But the really unexpected development is that Northwestern, yes that Northwestern, really cleaned up in Ohio nabbing four signees and one of the top player 4 players in the state in Odenigbo

That's Not Much Of A Fence

While Ohio State signed the most players by far in this class they didn't clean up with the top players in the state, at least not to the degree that anyone is accustomed to in Columbus. Of the top 8 players in this class, the ones that everyone has as a four star, four will be taking it out of the state. There is the aforementioned Odenigbo at Northwestern, Bolden and Kalis at Michigan and Pharaoh Brown to Oregon. Kalis had committed to Ohio State early in the process before flipping to Michigan after the Jim Tressell scandal hit. OSU still cleaned up in state, but there are a couple of guys going elsewhere that everyone in Columbus would love to have

Which City Claims The Top Spot

One of the longest running debates among those who follow high school football in the state is which city produces the most players. And it is basically a two city race each and every year. Cincinnati and Cleveland produce far more talent on a year to year basis. If you ever get asked what city has the best football in Ohio the answer is always one of the two. After Cincinnati took the title last year Cleveland wrested it away this year.

Just like last year the odds of finding that backwater gem in Ohio are so much smaller than they are in other parts of the country, the south in particular. The vast majority of the states AQ recruits hail from the population centers above. Only 10 were found off the beaten track. 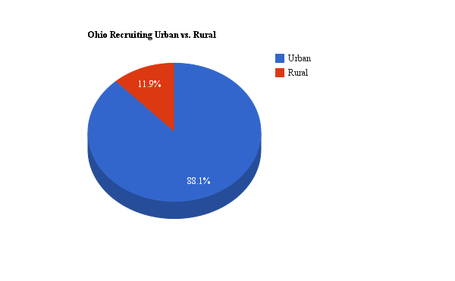 The state of Ohio always has some powerhouse programs that produce players year after year. But the distribution is usually a bit more level. A few produce 3 or 4 signees in a season but the majority of those who do produce an AQ signee only have 1. This year is a bit different on that front. 16 different high schools had multiple BCS signees, that's up from 10 a year ago.

Note: The schools in bold above also produced multiple BCS signees a year ago

View Ohio BCS Recruits Class of 2012 in a larger map