Big East Expansion Round Up

Share All sharing options for: Big East Expansion Round Up 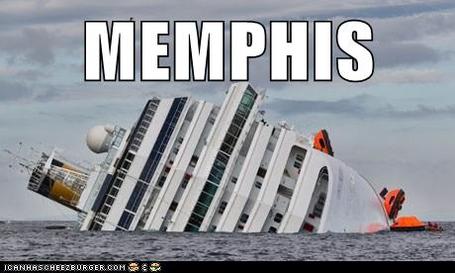 Yesterday the long anticipated, and from where I am sitting, rightfully reviled addition of the Memphis Tigers to the Big East as an all sports member starting in 2013. The move simply showcases what everyone already knew.

1) John Marinatto is a moron. He is the Jeff Zucker of Conference commissioners. If you would like a slightly less niche reference fine. He is like a kardashian. In that he has never really done anything of any lasting significance and yet remains in a position of (relative) authority.

2) The Big East is the last dog at the bowl with no power to speak of and no chance to create a better life for itself through expansion. The only options are those who's conference situations are even worse off than the Big East. Basically the other five conferences.

The Big East is hell bent on getting to 12 teams, and Marinatto isn't exactly picky about who gets the call either. That's why Memphis is joining the Big East. (Go ahead and boo that last sentence, you'll feel better I swear)

The other news today is that West Virginia and the Big East are nearing an agreement for them to depart for the Big 12 in time for fall.

West Virginia and the Big East Conference are nearing agreement on a settlement worth at least $20 million that would resolve all issues between both parties, college football industry sources told CBSSports.com.

The Mountaineers will join the Big 12 for the 2012-13 school year. However, in a bizarre twist, sources told CBSSports.com that West Virginia officials have contacted future Big East members to see if one could join in 2012 instead of 2013.

The reason is that with West Virginia’s departure to the Big 12, the Big East will be left with only seven football members this fall. Without an immediate replacement for West Virginia, the remaining Big East schools will be scrambling to find a 12th opponent. It’s unknown why West Virginia would assist a league that WVU athletic director Oliver Luck compared to "a ship … seriously going down," except that it could lower West Virginia’s buyout, sources said.

Nothing is official yet. But this is a matter of time kind of thing.

The Mountaineers have said they will not honor the league’s 27-month exit agreement and join the Big 12 this fall. The Big 12 has forwarded its 2012 football schedule, with West Virginia on it, to its television partners. As of Thursday morning, however, the Big 12 still had yet to release its football schedule to the public.

The school that everyone is buzzing about joining the Big East in 2012 is Boise Stat.

Boise State has had discussions with the Western Athletic Conference to determine if its Olympic sports teams could join the WAC in 2012 in case the Broncos’ football program joins the Big East this fall, sources told CBSSports.com.

"The Big East has been pushing them ‘quietly’ to join for 2012," a source said. "The WAC has had to rearrange lots of [its Olympic sports] schedules [in anticipation of the possible move]."

But there are some complications.

Four Big East teams — Cincinnati, Pitt, Rutgers and Syracuse - still need a fifth non-conference game for 2012. The Star-Ledger reported that Rutgers is nearing a deal with Arkansas. The other schools could also go the FCS route, but having two on the schedule means they'll be required to win seven games for bowl eligibility instead of the usual six.

From a longer term perspective what all this conference expansion, (plus the coming dissolution of AQ status), is doing is furthering the gap between the haves and the have not's.

When this thing eventually goes down, when college football finally settles in for the long haul—we’re about two chess moves away—the sport as we know it will be too big and too bold for anyone outside the BCS conferences to stay alive

A convergence of events so unthinkable and so implausible has given, if you can believe it, even more power to those running the BCS. It has allowed this group of shrewd businessmen—because, don’t kid yourself, that’s what the BCS presidents and conference commissioners are—to somehow satiate a starving public with a "playoff" and feed mere crumbs to those schools below them.

What we will be left with is basically College Basketball, without the NCAA tournament, as a pure pragmatist I have no problem with that. Not a big one. Certainly not one big enough to make me want to go grab a torch and a pitchfork to go lynch Jim Delany*

* I would like to do this, but only because I find the idea of Jim Delany himself to be abhorrent, not because of what is happening to my favorite sport.

When you really think about it all that AQ status is in College Football is the Redline of Mid Majority fame. All I really want from this expansion clusterkurfuffle is for the Bearcats to be above the Redline when it gets drawn across this sport. The best place for that is still the Big 12, but it can be done from the Big East, it'll just be harder to make it work.