And we're back. I want to apologize for what seems like a long time for the site to be dormant. At least relative to past outages, (for want of a better term). But starting a new job, even a part time poorly paid job selling shoes at an unnamed sports centric big box store is time consuming. Stating the obvious the season and over and with the conclusion of the season comes the part where we gather over vast quantities of data of all types and make harsh judgements. Judgements that are lacking in perspective, knowledge and (more than likely) intellectual veracity. First up, Dion Dixon

Dion Dixon managed to do the improbable this year. He managed to become a better overall player, compared with his breakout junior season, while at the same time becoming an offensive liability. I am a firm believer that every basketball team can benefit from having one guy who thinks he is a better player than the statistics say. Dion Dixon was that guy for the Bearcats this year. He consumed more possessions than anyone else on the team this year (22.9%*) Cashmere Wright was second (22%). At the same time Dixon's offensive rating** was the lowest among the the starters, 100.9. That rating was also down significantly from his career average coming into the season, 104.9.

* Note for those new to tempo neutral (read: advanced) basketball statistic any stat ending in a percentage means the percentage of x stat accrued while player y is on the floor. In this case Dixon was used on 22.9 per cent of possessions while on the floor.

** Offensive Rating is the number of points the team would score if player X was involved in 100 possessions. An offensive rating of 100 is more or less perfectly average.

The problem with Dixon's game in this year could be summed up in a simple phrase. There is such a thing as too much freedom. When The Brawl happened Mick Cronin was forced to scrap the more methodical interior based offense of the last few years for one that featured liberal use of a four guard lineup and green lights for everyone to shoot anything at any time. On balance the change was a welcome one. It made the team better because it made everyone harder to guard. But that approach, like any strategy had drawbacks, the biggest one from where I am sitting is temptation. The temptation that comes with a green light is profound. When you can do anything free of charge it changes the approach for every player. Some aren't tempted at all and they stay, more or less, in their comfort zone, think Sean Kilpatrick. Others will indulge their envelope pushing predilections on occasion but will, on balance, walk the line between confident and reckless; think Cash. And yet others will push the outside of the envelope as far as it will take them, even if pushing the envelope takes that person waaaaaay past the point of diminishing returns. That's Dion Dixon.

Nothing illustrates that point better than Dixon's shot chart for the season. 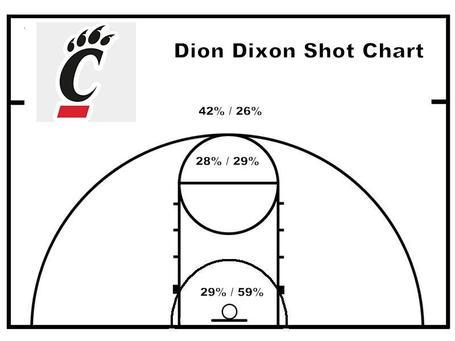 Note: The first percentage is the share of Dixon's overall field goal attempts. The second is the shooting percentage from that area of the court. And yes I am fully aware that the first series doesn't total 100. The mid range shot percentage is supposed to be 29 percent rather than 28. Chalk it up to me and my superior typing skills [sic] rather than a wonton flaunting of mathematical convention.

The key point? Dion Dixon shot just 27.5 per cent on jump shots in 2011 but 71! per cent of his field goal attempts were jump shots. If that isn't a stat for someone who spent the last 25 games of his collegiate career indulging his darker impulses and forsaking all that is rational and good I don't know what is.

From my perspective the worst thing about Dixon this year was just how many possessions he wasted taking contested pull up jumpers rather than doing what he did best, attacking the rim and getting to the line. Don't get me wrong Dion got to the line a ton. His free throw rate*** (.38 ) was the highest among starters (38) and 2nd among rotational players to Justin Jackson (.47). In fact Dixon's high free throw rate is the biggest reason he was able to improve his PPG from 11.6 as a Junior to 13 as a Senior despite big drops in his shooting percentages.

Dixon could have easily been a 15 or 16 point per game scorer this year if he could have resisted the impulse for launching a high volume of shots that were, for him, low yield attempts.

I know that I have spent the last, oh, 700 or so words laying out, in graphic detail, what can fairly accurately be described as Dion Dixon's regression offensively. But I want to call to your attention something I said above. If you will allow me the ever so slight ego trip of quoting myself. From above.

Dion Dixon managed to do the improbable this year. He managed to become a better overall player, compared with his breakout junior season, while at the same time becoming an offensive liability.

I think that the offensive liability is firmly established at this point. But Dixon's value and improvement this year can't be accurately summarized with the statistics we currently had. Where Dixon really improved this year was on the margins. Doing the kind of things that Basketball connoisseurs know and notice but which most people don't. Some of that improvement does show up in the box score. Dixon posted career high averages in rebounds (3.4), offensive rebounds (1.8), assists (2.1), blocks (.5) and steals (1.6).

But where the real improvement came is on the defensive end. Dixon is a spectacular athlete (right? right!) but he hasn't always harnessed that athleticism to become the lock down defender he has always been capible of being. Until this year. The career highs in blocks and steals shed some light on that. But those stats are fragments. There are a hundred different ways to disrupt an offense without registering a block or a steal in the box score. Dixon seemed to master them all. And that's why his Senior season was his best as a player, even though he took a step back offensively as a senior.

So what are your thoughts on Dion from this year?