Jeremiah Davis III was one member of a pretty large freshman class. Like most every freshman, true or otherwise, who plays for Mick Cronin his numbers don't jump out at you. Davis's standard line in 2011-12 was 2.5-.9-.5 in 7.9 minutes. Davis only played in 27 of the teams games.

When Mick Cronin cut down his rotation to, effectively, 7 Davis wound up on the bench. He didn't play a minute in the Big East Tournament and he had two minutes of garbage time in the Ohio State game. Still I really liked what I saw from Davis III this year.

The two things that stick out to me is that he knows how to pick his spots. The overarching trend among Bearcat guards this year was a tendency to take a ton of jump shots off the dribble that are, in hindsight, objectively terrible. Davis wasn't nearly as prone to the impulse as some of the other Bearcats. Once again the handy shot chart. 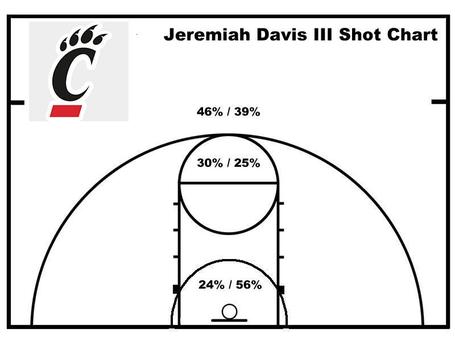 Davis shot a ton of threes this year given his relative paucity of playing time. But these weren't threes of the Dion Dixon variety. Almost all of them came within the general confines of the offense. 83% per cent of his three point makes were assisted.

The other thing about Davis that I really liked was that he was never afraid of the moment. He was perfectly confident taking big shots in tight moments. And that is a very big plus sign when it comes to projecting him forward. Nothing illustrates that better than the St. John's where he knocked down a three to take the lead with 5 or so seconds left. UC lost that game, but Davis's shot was a huge development.

I still don't know whether or not Davis is the heir apparent to Cashmere Wright as point guard or if he is going to be an undersized two guard. It could go either way really. Dixon moving on opens up that off guard spot and I imagine that Davis will be in the mix for those minutes.