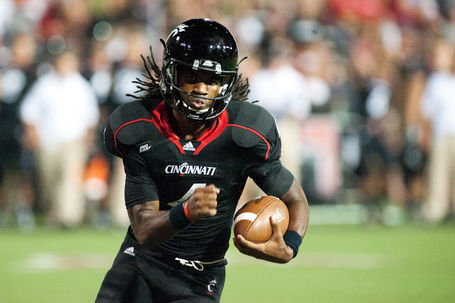 Fifteen up , fifteen down. With that Spring Practice is over and the Bearcats will begin their summer Strength and Conditioning routine next week. In the mean time we can begin pulling out rosters and speculating wildly about starters, rotation players and sleepers. And none of it will really matter because you can take the thing out and tear it up at the start of August because it will have no bearing on anything at that point. This is what I think the depth chart for the September 6th season opener against Pitt will look like based on the available evidence.

Stater: Munchie Legaux - Much has been made about the strides made by Brendon Kay this Spring. There is little doubt that Kay had his best (only) spring of his career this year. But that is part of the problem. Kay has a lot of talent, but this is the first and only time he has been healthy enough to make it through a Spring practice without injuring himself or rehabbing an injury, and that's the rub with Kay. He is in competition with two other guys, neither of whom inspire any doubt about their ability to make it through a season.

The reason Munchie will be the guy, barring injury or a meltdown over the summer, comes down to a simple fact. From the standpoint of Mike Bajakian Munchie puts more options on the table than he takes off. That is the key. The sum total of Munchie's abilitys as a quarterback, as a runner and as a leader far exceeds those of Kay and Patrick Coyne, both of whom have limitations that will have to be worked around. Munchie isn't a perfect QB, but there isn't one on the roster either. This is a closest to the pin wins situation. Legaux is on the green, Kay and Coyne are on the fairway.

Back Up: Coyne - For basically the same reason that Munchie won the back up job last year over Chazz Anderson. The back up quarterback is a position for the future rather than the present. Particularly with this staff which gives a much larger chunk of the reps to the back up than most. Kay has played well this Spring, but I am not entirely sure that it was well enough to win the back up job. Coyne is the heir apparent to Munchie, and everyone around the program seems to see him in that light. It's the biggest reason why I expect him to be on the line under Munchie when the Depth Chart is released in September.

Starter: George Winn - The dynamic at this position is set. Winn is the veteran who has worked hard behind the scenes and will be given a chance to earn his keep. But this is a position in transition, and that transition will playout over the course of the year. Winn is a capible guy who can do the job credibly, but he has two young bucks hot on his tail, each of whom is vying to be the future of the position. Winn will start the year as the starter, but I am not confident that he will end the year as such.

Back Up(s): Jameel Poteat and Ralph Abernathy IV - The best case scenario from the coaches perspective is for one of these guys to unseat Winn as the season goes on and become the guy at the position. That way the back field will be set heading into 2013. Both guys are capible of doing just that, though they have different styles as runners Poteat being a more traditional north and south runner, Quatro being in the Quarkback tradition. All three of these guys will get carries, so who has what label might prove to be irrelevant. Still this is what I think the position will look like.

Starters: Anthony McClung, Kenbrell Thompkins, and Alex Chisum - On paper the Wide Receivers are going to be down a starter as D.J. Woods graduates. In actuality the top three receivers from the Liberty Bowl will return to start the Pitt game. Towards the end of the season Chisum supplanted Woods as the number three man on the totem pole.

Back Ups: Chris Moore, Dyjuan Lewis, and Danny Milligan - Moore and Lewis are really intriguing guys, but for different reasons. Lewis is hands down the best athlete on the team. He didn't play a ton last year at receiver, he did appear in 10 games last year on special teams. His lack of playing time at receiver was a matter of rust. Last year was his first competitive Football in two years after being held out as a freshman due to academic issues. Moore is similar but slightly different. He would have played last year as a true freshman, but he was injured in camp and then redshirted because of it.

Starter: Travis Kelce - The brother of the Beard came into his own last year. He is a big time weapon in the red zone and particularly on third downs where he converted 75 per cent of his receptions for first downs. The unquestioned starter heading into the summer program.

Back Up: Blake Annen - Annen was an unexpected rotation guy in 2010 as a red shirt Freshman. His role last season was scaled back a bit with Kelce back from a year long suspension and Adrien Robinson forming one of the better TE duos in the Big East. Annen was slowly worked into the rotation as the season went along, primarily as a blocker. Keep an eye on DeyShawn Dowdy. He is only a freshman, and only 220 pounds, but he is a freakish athlete who can do some crazy things.

Starters: (from left tackle to right tackle) Eric Lefeld, Austen Bujnoch, Dan Sprauge, Andre Cureton and Sean Hooey - A surprise strength last year the group has a chance to be even better this year because it appears the everyone of the presumed starters is playing at their "natural" positions. Based on what I have heard and read this group would be classified as the presumed starting five.

Back Ups: Kevin Schlomer, and Sam Longo - It's too early to even project what the offensive line depth chart will look like at this point. Lefled, Bujnoch and Hooey are locks. Sprauge is a partial lock. But Schlomer, Longo and Cureton are all waging a battle for the fifth and final starting spot at right guard. Really it is the only position on the offense that is up for grabs.