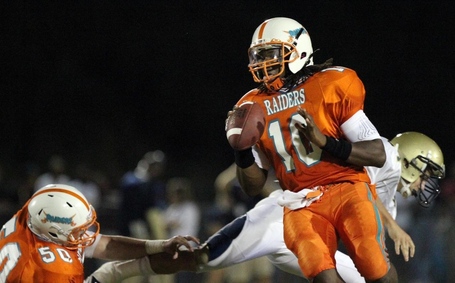 Bennie Coney is a mercurial dude. That is the impression that I get reading up on him and his background. He has always had talent but he has been a handful of times off the field. As a Junior Coney was one of the hottest names in recruiting circles. Coney's play had garnered early verbal offers from Florida State, Notre Dame, Michigan, Michigan State and Purdue (among others). His rising star was bottled up in October of his Junior Season when Coney was dismissed from the Plant City Football team for the ubiquitous violation of team rules. It was actually the second time that Coney was suspended by Plant City head coach Wayne Ward, the first coming during a September game against Newsome.

Ward did not come to his decision to boot Coney from the team easily.

As for what prompted Coney's suspension I have yet to hear anything beyond it being an altercation with his teammate. Details after that are hard to come by. What is known is that Coney took the set back to heart and went to work on his game and on himself as well.

"I have improved to a 3.0 GPA in the classroom and I will take the ACT this Saturday," Coney said proudly. "I stay after school now to study instead of doing other stuff. Playing football...that is just what drives to me to work harder. Honestly, I think if I wasn't in school or playing football I would be doing stuff that I shouldn't be doing."

In short Coney is a kid who went through a lot of adversity, some of it of his own making I am sure he would be the first to admit but took it in stride. That is a positive thing in my book. The whole ordeal took some of the luster off of Coney's recruitment. Some of the bigger name schools involved like Florida State, Notre Dame and Michigan backed off. In the end it came down to Cincinnati and Virginia Tech* with Butch Jones and the boys winning out.

As I said at the time of his commitment Coney is arguably the platonic ideal for the Butch Jones/Mike Bajakian offense.

Bennie Coney checks all the of Butch Jones's boxes in terms of what he wants from his quarterbacks in terms of a skill set. He has great footwork and can destroy a defense from the pocket, he has an arm that enables him to make all the throws in the playbook and he is mobile enough to run the zone read effectively. Coney is pretty much the perfect fit for the offense that Jones prefers to run.

The only real change from that assessment is that Coney was even better as a passer in his Senior season.

Physically Coney has the tools to perform at the college level right now. But his understanding of the game and of offense is what will take time to get together. My opinion of Coney is that of all the Quarterbacks on the Bearcats roster he has the highest ceiling. What I heard coming out of spring echos that. He will take a red shirt this year and bide his time. I will just say this about Coney. At this point he is raw and lacks some of the polish of his classmate Trenton Norvell, but the proverbial sky is the limit for Bennie Coney.