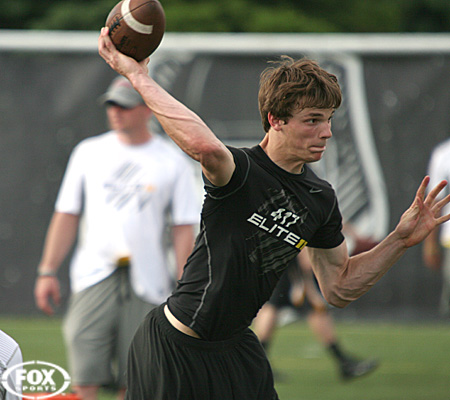 This weekend Kyle Kempt is in Columbus for the Nike camp today. Yesterday he was at the Elite 11 with the rest of the top QB recruits in the the Region. Shane Morris (Michigan), Malik Zaire (Notre Dame), Jalin Marshall (Ohio State) and Kyle Bolin (Louisville). CBS's recruiting guy Bryan Fisher had this to say about Kempt.

- Massillon (Ohio) quarterback Kyle Kempt was the star underclassmen at this event last year and had a strong performance. The Cincinnati pledge didn't throw a perfect spiral every time but was very accurate and got the ball where it needed to be every pass even if he did have a few hitches in his motion.

That assessment is in line with what I have seen/heard about Kempt. What makes him good are his accuracy, awareness in the pocket and general feel for the game. Traits that aren't exactly designed to show up in a camp setting.

Related Kyle Kempt Brings A World of Experience To The Bearcats

A.J. Branisel is the most recent of the Bearcats commitments pledging to Butch Jones in mid April. In the intervening weeks Branisel has seen a flood of new offers.

Within days of his commitment, Branisel received offers from Nebraska, Indiana, Louisville and, most recently, Tennessee. The Cornhuskers have made an immediate impression on Branisel, making them a player for the talented tight end. With college coaches coming in to visit him over the next month, expect things to get much more difficult for Cincinnati to keep his commitment.

One can only hope that Adrien Robinson being the first Bearcat TE to get selected in the draft since Brent Celek in the 2007 will be a factor in UC's favor. Being a Cleveland kid the only school that I would worry about plying Branisel away would be Ohio State, but that offer isn't likely to come as long as Marcus Baugh remains a Buckeye. I expect Branisel to look around a bit but in the end I think he stays with Butch Jones and the Bearcats barring a big offer.