Share All sharing options for: Solomon Tentman: Determined to Fulfill a Dream 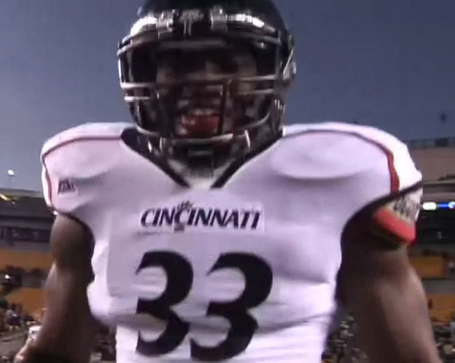 On August 21, 2010 the University of Cincinnati football team was having its last major scrimmage at Camp Higher Ground in West Harrison, Indiana, before coming back to Cincinnati. The Bearcats were coming off of their best season in school history and it became clear that the football program was finally relevant. It was a sunny day, perfect for football. But, this day would change the journey of one Bearcat forever. As the scrimmage was coming to a close, Freshman Linebacker Solomon Tentman turned awkwardly on his left leg during a play.

In a matter of seconds, Tentman, who had been one of the top ranked high school linebackers in the country the previous year, was writhing in pain holding his knee. "One of the doctors and J.K. (Schaffer) carried me off of the field," said Tentman. "I couldn’t even lay my leg straight. On a scale of 1-10 it [the pain] was a 20." Akron, Purdue, Minnesota, and Michigan. "I chose UC because I watched them when I was growing up," said Tentman. "That was back when there was only a couple of thousand [fans] showing up to the games. It's home." He admits that getting more playing time this year is on his mind and didn’t shy away when asked about the possibility of becoming the starting middle linebacker for the Bearcats next season. "That’s definitely a goal of mine. I’m just trying to be more aggressive on the field and trying to become the playmaker that J.K. Schaffer was." I approach football with a no remorse attitude. There are certain times when I have fun, but I approach it very seriously because you never know when it's going to be over."

The former three star recruit was told he had a torn ACL, LCL, MCL, partially PCL, and partially torn patella tendon. For most athletes, an injury like this is career-ending. Every major ligament in his knee was damaged. The doctors were very upfront with him when they said his football playing days were most likely over. Six days later Tentman had surgery to repair his destroyed knee. "The night after surgery was probably the worst night of my life. The nerve block only lasted about six hours, when it was supposed to last 24. I was in pain all night," he said.

In just a few seconds, a game he had played since middle school seemed to be taken from him. However, the linebacker was determined to show everyone his love-affair with football hit a speed bump and not a permanent road block.

When asked about his family’s reaction to the injury, Tentman admitted that he had to console them saying, "They were a little worried. I told them I would be fine and that I wasn’t giving up; that [giving up] wasn’t in my fiber. I knew I was going to play again."

If Tentman was going to recover, he learned early on it would be a tough battle not only physically, but mentally as well. The rehabilitation process for a severe injury like his would be long and strenuous. That meant early morning workouts that consisted mostly of weights, agility drills, and mobility exercises. After each workout, Tentman would have to ice down the knee or it would swell.

As the days, weeks and months passed, Tentman’s condition improved enough that the doctor said his career was not over and that he would be able to take the field after his knee healed. He worked hard to regain his old form, but with most severe injuries, time plays a major role in the healing process. There was no giving up in Tentman, who said: "As long as you keep working harder and harder and harder, then everything will come with it. It [recovery] has been a gradual process and I’ve just learned to accept it."

Tentman went between three and four grueling sessions of rehab each day. Each session lasted at least two hours. He quickly realized that the exercise bike and bosu ball would be important in his recovery. The bosu ball was used strengthen the muscles around his knee so he could stay balanced and stable, not only on the football field but in everyday activities. Tentman admits one of the hardest things in rehab was not lifting weights or running; it was simply straightening his knee. "They would extend and bend my knee forcefully so they could remove the scar tissue and regain full range of motion; which was one of the most painful parts." After he regained full motion in his knee, the strength training began. Tentman did numerous exercises to regain the power he once had in his legs including: leg press, reverse hyper lifts, and reverse dead lifts. Once he made it to this stage, it was a matter of gaining the lift and power he once had. This took time, but once he passed an exam given by the doctor he was cleared to do agility and running drills. Eventually, Tentman was able to begin conditioning with the team and the hours of rehab and hard work he put in were paying off.

The injury took place 21 months ago and Tentman surprised a lot of people with his recovery. He was able to travel with the team and play in five games last season, but even he acknowledged he wasn’t at 100% physically. He was still walking and running with a slight limp. Even though he didn’t get much playing time last season, Tentman knew he had to be patient since he hadn’t fully recovered from the devastating injury. When asked about being completely recovered now, Tentman didn’t hesitate: "Yeah, definitely. With summer running and conditioning I feel 100% and I’m ready to go."

His health is important for the Bearcats because Senior J.K. Schaffer graduated and there is an open middle linebacker spot. Now fully healthy, Tentman looks to capture a lot of playing time and help fill a need for his team. Schaffer has been impressed with Tentman and undoubtedly believes in him: "I consider Solly a brother, and I am pretty confident that he feels the same way about me. I have spent countless hours in the weight room, locker room, film room, and field with Solly, and I know that he is going to be successful. The way he fought through his rehabilitation and his injury shows the toughness that Solly has, and also his persistence. Solly is a guy that I would go to war with any day."

Complements on work ethic and determination have become a common trend when talking to peers and coaches about Tentman. People who know him seem to understand the potential Tentman has and how hard he had to work just to get healthy after that devastating injury.

"Not very many people are able to come back from that," University of Cincinnati Football Head Coach Butch Jones recently told Paul Dehner of GoBearcats.com. "Not only from the severity of the damage to the knee, but also the mental toughness, the mental conditioning that it takes to rehab yourself back to being football conditioned."

Tentman’s love for football started in Clifton in elementary school at Annunciation on Clifton Avenue. "My passion for the game started in the 2nd grade when we played two-hand touch on the playground," he said. "I didn’t play organized football until the 5th grade." Tentman realized in the 8th grade that he had the tools to play at the next level. He attended Roger Bacon High School in St. Bernard where he was the Greater Catholic League Defensive Player of the Year as a senior in 2009-2010. He tallied 179.5 tackles and 14 sacks during his senior campaign.

Although it may not sound like it, Solomon Tentman does have hobbies other than football. In his free time he enjoys cooking and playing video games. Steak is his favorite food to cook, but also enjoys preparing bacon and eggs. His favorite videogames include Call of Duty and NCAA Football. His football confidence extends to the virtual gridiron where Tentman claims, "I can use any team on the game and beat anybody with anyone [team]."

Tentman’s goal was to always earn a Division 1 college scholarship, but "it became a reality my sophomore year [of high school] when I was getting interest from all over." He was recruited by numerous schools including Akron, Purdue, Minnesota, and Michigan. "I chose UC because I watched them when I was growing up," said Tentman. "That was back when there was only a couple of thousand [fans] showing up to the games. It's home." He admits that getting more playing time this year is on his mind and didn’t shy away when asked about the possibility of becoming the starting middle linebacker for the Bearcats next season. "That’s definitely a goal of mine. I’m just trying to be more aggressive on the field and trying to become the playmaker that J.K. Schaffer was."

This upcoming season looks to be Tentman’s first full year of college football. All of the pain he went through with his injury and the hard work he put in to make a return to the game he loves is astounding. All of the grueling workouts, rehabilitation and hardships he has faced in the last 21 months have come to an end and he will be able to resume playing football at full strength. There’s an old saying, you never know what you got until it’s gone. For Tentman, football was gone, but he didn’t take no for an answer and worked his tail off to return to the game he loves. When asked if he looked at football any differently now after his injury, Tentman simply said, "I approach football with a no remorse attitude. There are certain times when I have fun, but I approach it very seriously because you never know when it's going to be over."

Tentman has shown his family, teammates and fans that he is willing to do everything possible to be out on that field. The hard work he has put in to defy the odds is living proof that hard work and dedication can get you where you want to go in life. However, Solomon Tentman still has one thing left to do to complete his comeback: play in front of his hometown crowd. "One moment I can’t wait for is September 6th vs. Pittsburgh on ESPN in a sold-out and blacked-out Nippert Stadium," Tentman said thinking of a packed house for the Bearcats 2012-2013 season opener. After everything he has went through, no one can doubt his will to succeed.