On an objective scale of college football, the Cincinnati Bearcats have a small defense. There isn't a single 300 pound man in the Bearcats defensive line rotation. The starting linebackers (Greg Blair, Nick Temple and Maalik Bomar) average 233 pounds between them. Drew Frey is the biggest guy in the secondary and he barely cracks 210 pounds. The Bearcats are small, yes, but they are fast. This is not a fact without purpose.

John Jancek is a guy who craves speed. He wants as much of it on the field as possible at all times. That is a big reason why the Cats went Nickle for large portions of last season. Given the option of size or speed Jancek always comes down on speed. In general that means everyone gets smaller. To counter that disadvantage, a defense must emphasize the traits that they do posses.

For the Bearcats that means playing an aggressive, attacking style of defense. That is how the Cats played last season. It is, almost certainly, the way they will continue to play for the remainder of this year. It is a high risk, high reward approach. Against Pittsburgh the rewards were clear. Six sacks, ten tackles for loss, two interceptions and a handful of passes defended and quarterback hurries. Equally clear were the risks, two busted plays that accounted for 81 of the Panthers 415 yards of total offense. Both were the byproducts of the Bearcats being overly aggressive.

In 2011 Ray Graham was among the best in the country at generating plays of 10 or more yards, 38 of them in 8 games. Thats an average of 4.8 per game. To put that in context the national leader among running backs last year was Montee Ball, who produced 70 such plays, in 14 games, an average of 5 per contest.

Against Cincinnati Graham had two of them, for 81 yards in total. For the game, he finished with 154 yards on 23 touches. Some quick math puts his total yardage on the 21 other plays at 73, an average of 3.5 yards. Ray's statline from Thursday looks gaudy, but the Bearcats actually did a reasonable job of keeping him under wraps. Except for two plays.

So what happened? Its simple, Graham exploited space created by the defense losing its shape. The way a defense aligns against an offense can seem random, but there is a reason everyone is in their place. The defense wants a man in every hole, or gap as the kids say. As a play progresses the defense should always have someone in every gap. They want to fit a man in every space where the ball might come.

From a defensive perspective, the whole of the last paragraph can be summed up, so long as its a running play, in one phrase. They want a good run fit. A good run fit cuts off all areas of escape for the running back, and the play ends with a TFL or no gain. When the defense doesn't, bad things happen. For example.

This, this is a bad run fit. Lets take it frame by frame.

As the handy on screen graphic tells us its 2nd and 8. Pitt is behind schedule, but not so far behind schedule that they can't run the ball. I am 99 per cent sure that the logic here is lets pound Ray to get to third and medium rather than third and oh-my-god-Tino-has-to-throw-the-ball-downfield. As such they come out with a tight double wing. UC counters with a 4-3, but with Brandon Mills standing up on the boundary side, so it looks like a 3-4. Roll it.

Pitt is running a simple inside zone, the Bearcats counter with a MIKE/NT twist. John Williams shoots the playside A gap, Greg Blair loops to the backside A. This call is exactly what I would expect from John Jancek, statistically speaking its a low risk situation to use a stunt to bring a little heat. Win, win.

John Williams does his job. Graham can't even press to the hole, his decision is made for him, he bails to the left. keep an eye on Nick Temple, who disengages from Hubie Graham and makes his way into the backfield. That is a mistake, he just doesn't know it yet.

Graham presses left, sees Deven Drane closing him down, so he looks back to the right. Just now you can see the faintest of running lanes forming through the middle of the picture. You know who else sees it? Ray Graham.

Now you can see where Graham is headed, and you can see how a line that didn't really block anyone suddenly finds itself in a great position to, essentially, set a pick.

The pick is set and Graham is off to the races.

Now this might seem like homework but go back to the video, and watch it twice. Once focusing on Greg Blair, the other on Temple. I'll wait. Both Temple and Blair make small, but crucial mistakes. But here is the key, they are mutually reinforcing mistakes.

Temple is the end man on the line. He started out playside, but the disruption of Williams made him backside. The rule for the backside guy is always to stay home and wait for the ball to reverse. Its boring, but its the rule. Instead he chases the rainbow of a killer TFL.

Blair meanwhile is meant to blitz, and then occupy the A gap. The blitz he accomplishes, the occupying not so much. He attacks the blocker, and beats him, but then he runs himself out of the play chasing the rainbow of a monster hit. Half a second later the rainbow formerly known as Ray Graham bursts through the gap where Blair stood half a second previously.

Honestly if either Blair or Temple play this as their defensive rules tell them to it is, at best, a three yard gain. Instead both guys freelance a bit and Graham gets a monster run. Aggressive defense is good, but there is a point where aggressive becomes reckless. That point is when you have two guys just sort of running around for a bit. One more quick example.

Other than the video of the trumpet player biffing, this is the most viewed thing from Thursday's game. Its third and 8 for Pitt, and that can only mean on thing, its Joker time. 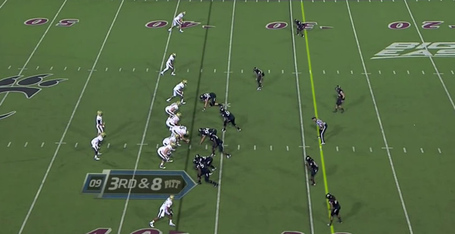 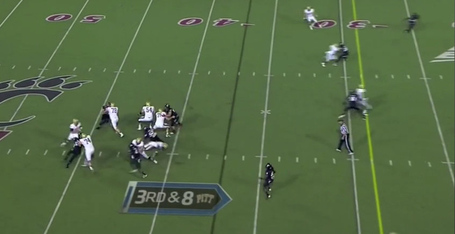 The Bearcats overload the right side of the line with a fire zone blitz and play cover three behind. It is simultaneously aggressive and conservative. It is also working. Tino is in deep trouble. Pay attention to Adrian Witty at the bottom of the screen on the 35 yard line. This is a cover three zone, but Witty isn't zoning as much as spying Ray Graham. Its smart. After all, Graham is all Pitt has. 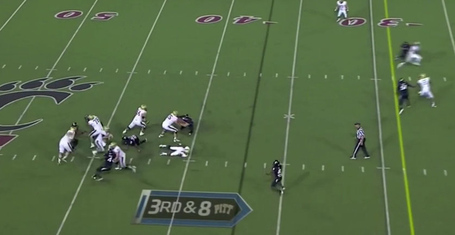 Rolling forward a bit Graham cuts a looping Brandon Mills, thus making Witty unoccupied. Its not hard to spy a guy laying on the ground. 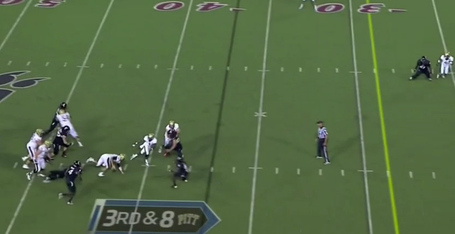 Brandon Mills gets Tino Sunseri's foot and trips him up. At the same time Witty reaches a cross roads. His spying responsibility is now up moving. But splayed just six feet before him is, possibly, the first and only sack of his career. What would you do? You would go for the sack, of course you would, you're an American. 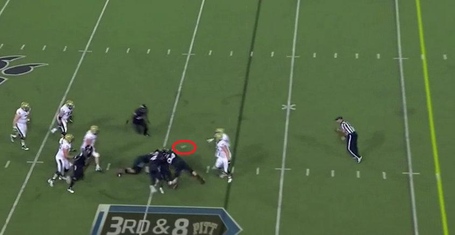 And you, and Adrian, would miss it. That little speck in the red circle is the ball floating miraculously, almost comically, into the waiting arms of Ray Graham. 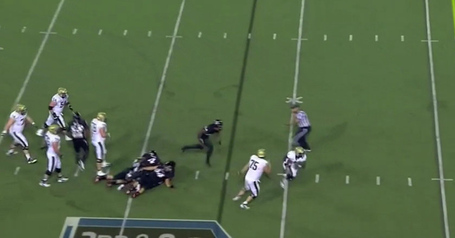 The lesson from these two plays shouldn't be that it is a bad thing to play with this style. It is that there are always risks, to any approach to this game. That is simply the nature of the beast. Against Pitt the Bearcats played John Jancek's scheme to something bordering on perfection. But, when you attack as much as this defense does simple missed assignments, or lapses in judgement, can mean big plays for the other guys. The key going forward is to remain aggressive, but with an eye to each players specific role in a scheme.