Share All sharing options for: Film Study | Because We All Need A Little More WHAM In Our Lives

No, not that Wham!. Deeply underrated though Wham may be, this isn't the place to discuss the innate appeal of 80's Britpop, that's what Twitter is for. But no, this about the role of the Wham block in the Bearcats offense. Before that though, there is exposition, by which I mean a diagram. 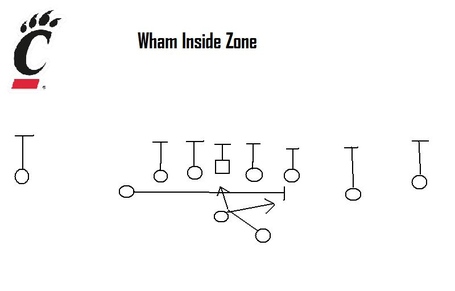 It is, on the face of it, a really simple play. The offensive line blocks for an inside zone, and the tight end cuts behind them to clean up the backside pursuit. It is simple, but it is simple for the best reason, it works.

The Wham block became a fixture in the offense down the stretch last year. In the Liberty Bowl against Vanderbilt the Bearcats used the wham block on Seven of Isaiah Pead's 28 carries, and there is evidence. Any doubt about whether the Bearcats would continue to use the tactic were put to rest on the first offensive snap of the year.

One thing to keep in mind is that Wham blocking isn't a concept in and of itself, like the inside and outside zone are. Its much better to think of it in terms of being a wrinkle that can be easily, and painlessly, tacked onto the end of any existing concept.

If you go and watch the running game cut ups linked in the previous period the Wham blocks are equally distributed between inside/outside zone concepts. And thats the best thing about the Wham, its ubiquitous utility. Lets break down that opening night score.

This is the pre snap look. Pitt initially tried to disguise its coverage, and you can see the Boundary Safety walking in the box, into the presumed strength of the formation, where Travis Kelce is lined up. When this play goes wrong for Pitt, that safety is the biggest reason why. 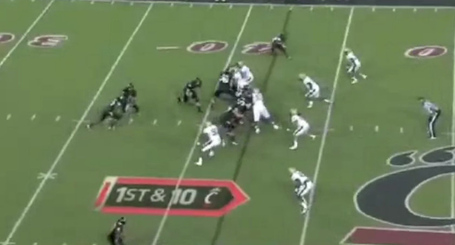 At the mesh you see the play starting to develop. The offensive line takes inside zone steps, meaning their fist step is forward, rather than lateral as it is on the outside zone. Two more things to notice from this frame. 1) Sean Hooey by passing the backside end T.J. Clemmings to cut off Shane Gordon. 2) Pitts backside safety, he doesn't know it yet, but he is in no man's land. 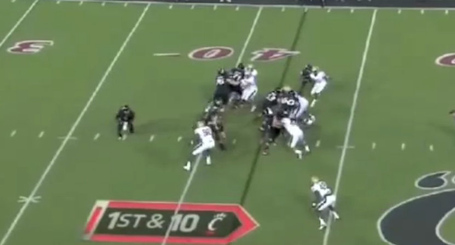 George Winn is in the hole between Hooey and the combination of Sam Longo and Dan Sprauge. No one is in front of him. 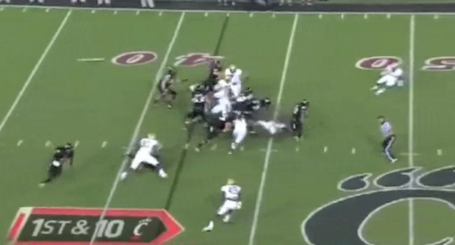 The great think about using wham blocking is that it really subverts a defenses expectations. In a spread offense like the Bearcats the location of the tight end, on the occasion when he is an inline blocker, declares the strength of the formation.

But by having him, essentially, pull and lead he flips the strength of play, while said play is happening. Again watch the Pitt safety, he walks into the box to match strength for strength. But he just winds up out of position. All he can do is dive wildly at the legs of Winn.

It worked so well the first time that the Bearcats went to the well again for rushing TD number two on that night.

This time the Bearcats run it out of the Pistol, but again with an inside zone concept. 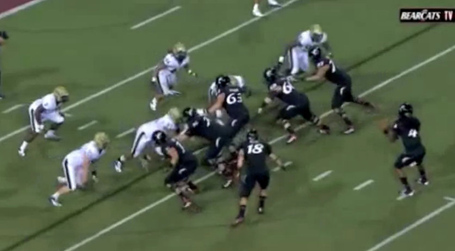 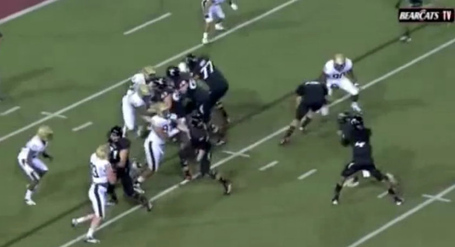 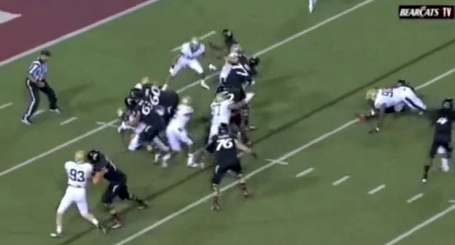 As you remember the trip to the end zone for George Winn was significantly more challenging. The first example was blocked, and executed, perfectly. But I am showing the second for a reason, there is another wrinkle that will almost certainly be coming later this year off the same look.

UC already has a simple wrinkle off this look, one where the TE simply runs a release behind of the LOS to the flats. It has already become the Travis Kelce special. But there are bigger plays to be had by slightly adjusting the blocking.

This play is not designed to be a zone read. It is a straight give on the inside zone to the running back every time. But it can be made into one with a very simple adjustment. When UC first started using this wrinkle it was with Zach Collaros as the quarterback. As athletic as Zach was, he has nothing on Munchie Legaux. So with Zach it made sense to have the TE cross the formation to take out the backside end. That is the blocking you are seeing above.

The next logical wrinkle is to have Kelce, or whoever the tight end is, lead around the corner for the running back instead of taking out the defensive end. If you look at the second frame of play number two you can see that the DE is already being "blocked" by Munchie, though not in the traditional sense. The simple presence of Munchie, who in the prior play, ripped off a 77 yard run. He isn't physically blocking anyone, but T.J. Clemmings is clearly paying attention to him, and can't pursue Winn because of it. Its not a stretch to leave that DE unblocked and to read him instead. There is a name for that play already, its called the Inverted Veer, get ready to see quite a bit of it.