This weeks game notes are out, and Butch Jones has set his depth chart for this Saturdays contest with Virginia Tech. In the Delaware State there were some surprise starts, Parker Ehringer over Sam Longo, John Williams and Adam Dempsey over Camaron Beard and Jordan Stepp. Not to mention the decision to sit Drew Frey, Adrian Witty and Alex Chisum as precautionary measures vs. Delaware State. This weeks chart reflects some of those last minute changes, mainly that Williams and Dempsey are still expected to draw the start at Nose Tackle and Defensive Tackle respectively.

Perhaps, the best news from the Delaware State game was the return of Dominique Battle, from what seems like ACL tear number 1,000.* The knee injuries have piled up, and have cost him a lot of the athleticism that made him seem so promising, back in 2009. Battle is now playing safety, backing up Drew Frey at Strong Safety. Having him back, in any form, at any position, is such a luxury for this team. The downside? Adrian Witty is now off the two deep. I imagine he will still get some run, being the heir apparent at SS.

*Its only number three, two left, one right

The last actual news from the Depth Chart is the return of the dreaded "--OR--" at two positions, Right Guard and one of the Wide Receiver spots. The RG spot is, once again, disputed. Longo started against Pitt, Ehringer against Delaware State. I would expect Longo to start against VA Tech, but it will ultimately come down to this week of practice.

More interesting is the third WR spot, which was Alex Chisum's and is now seemingly in competition with Damon Julian. Julian drew the surprise start against Delaware State, and he performed marvelously, 4 catches for 62 yards, with one TD on 4 targets. A lot was expected of Alex coming into the year, but his performance against Pitt was lacking, 1 catch for 7 yards, on 3 targets, with a drop. Julian is clearly an option at the second outside receiver spot if Chis can't get it going.

The complete game notes are here, read them, learn them, they will help you pick people up at the bar. As always the depth chart is in pictoral form, after the jump. 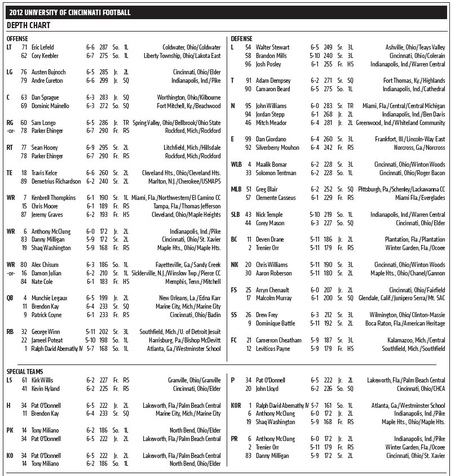